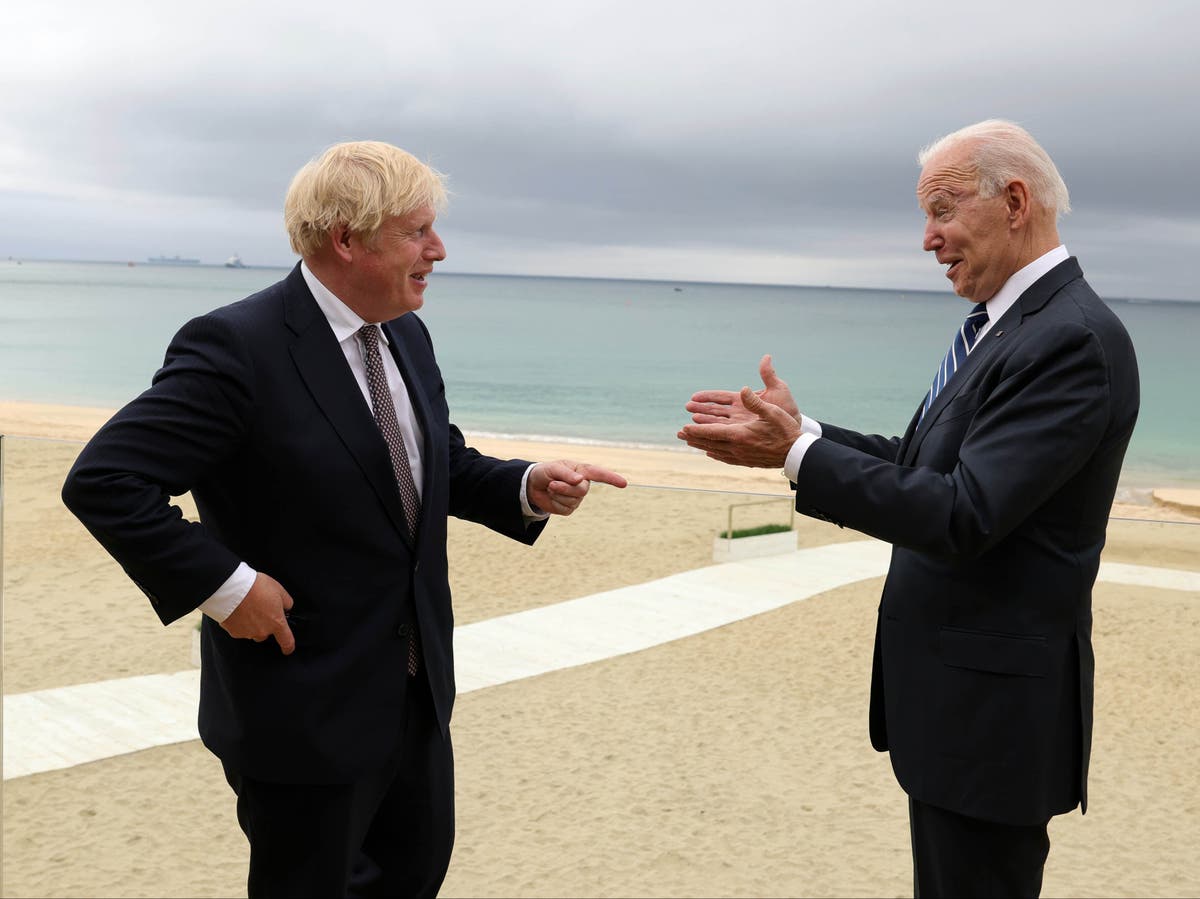 G7: US introduced to concept of Cornish ‘mizzle’ as weather scuppers Johnson and Biden’s meeting plans

Boris Johnson’s plan to host Joe Biden at St Michael’s Mount in Cornwall ahead of the official start of this week’s G7 summit was scuppered on Thursday by an outbreak of afternoon “mizzle”.

The Cornish dialect word meaning “misty drizzle” was no doubt unfamiliar to the American delegation or much of the press pack, but conditions were severe enough at sea to render it unsafe for the US president’s V-22 Osprey to make the short hop from the Tregenna Castle Hotel near St Ives where he and the first lady are staying.

Instead, the prime minister’s team were forced to relocate the talks on Brexit and Northern Ireland away from the historic tidal island to Carbis Bay.

Follow the latest on the G7 in our liveblog

“Anyone caught in mizzle will know that despite its cute name and initial feeling of light rain it will have you saturated within seconds,” Cornwall Live’s chief reporter Lee Trewhela explained, later tweeting his delight that his description had been picked up by The Washington Post to define the phenomenon for its justifiably-baffled American readers.

Local MP for Truro and Falmouth Cherilyn Mackrory meanwhile tweeted her apologies to Mr Biden regarding the weather, writing: “Welcome to Kernow, Mr President, sorry about the mizzle!”

When Mr Johnson, Mr Biden and their wives did meet up, the US president was gifted a framed mural portrait of 19th century abolitionist Frederick Douglass while Dr Jill Biden was presented with a copy of Daphne Du Maurier’s Gothic novella The Apple Tree (1952), the British author famous for her love of the coastal county where she set several of her best-known works.

After the quartet had strolled along the beach and were preparing to return to their hotel, Mr Biden cast a final glance out towards the iron-grey sky above the waves and commented, rather sweetly: “It’s gorgeous. I don’t want to go home.”

Asked later about what the pair had discussed, Mr Johnson was full of praise for his Washington counterpart.

“It’s wonderful to listen to the Biden administration and to Joe Biden because there’s so much that they want to do together with us – from security and Nato to climate change,” he said.

In an apparent allusion to Mr Biden’s disgraced predecessor, Donald Trump, the prime minister said. “It’s fantastic, it’s a breath of fresh air. There’s a lot of things they want to do together.”

Mr Johnson also championed the rude health of the “special relationship” – as did Dr Biden and Carrie Symonds – and denied that the US president had reproached him for jeopardising the peace in Northern Ireland over Britain’s messy withdrawal from the EU.

“No he didn’t,” he answered. “But what I can say is that the United States, Washington, the UK, plus the European Union have one thing we absolutely all want to do, and that is to uphold the Belfast Good Friday Agreement and make sure we keep the balance of the peace process going.

“That’s absolutely common ground and I’m optimistic that we can do that.”

Let’s hope the Bidens really did enjoy the scenery because they are now being invited to attend a beach barbecue in the company of Mr Johnson, Emmanuel Macron and Angela Merkel, which promises to be a chilly and dismal affair should the sea breeze pick up.