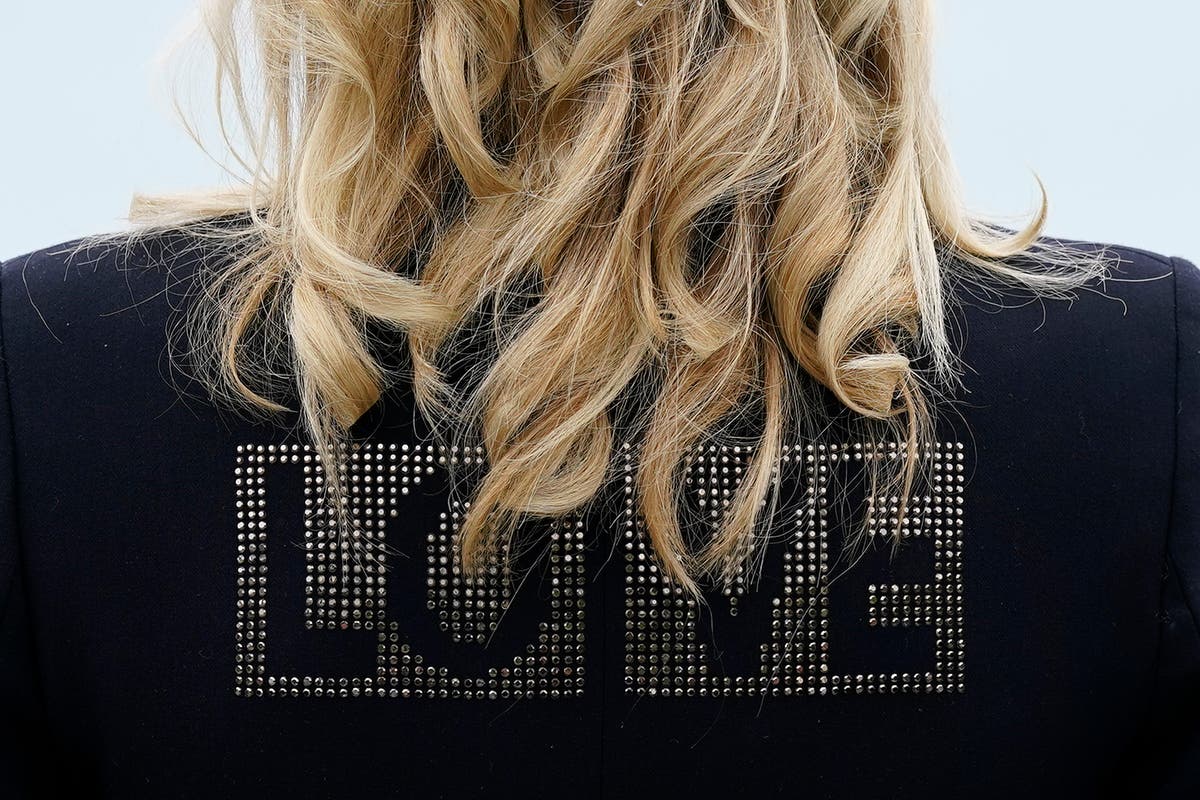 How can we help you plan your coverage more effectively? Let us know here.

ETHIOPIA-FAMINE LOOMS AGAIN — First the Eritrean soldiers stole the pregnant woman’s food as she hid in the bush. Then they turned her away from a checkpoint when she was on the verge of labor. So she had the baby at home and walked 12 days to get the famished child to a clinic in the northern Ethiopian region of Tigray. At 20 days old, baby Tigsti still had shriveled legs and a lifeless gaze — signs of what the United Nations’ top humanitarian official calls the world’s worst famine conditions in a decade. SENT: 1,170 words, photos, video. An abridged version is also available.

G7 SUMMIT — World leaders from the Group of Seven industrialized nations are set to commit at their summit to share at least 1 billion coronavirus shots with struggling countries around the world — half the doses coming from the U.S. and 100 million from the U.K. By Zeke Miller, Aamer Madhani and Jill Lawless. SENT: 1,100 words, photos, video. UPCOMING: 1,200 after summit begins at 9 a.m.

JUSTICE DEPARTMENT-CONGRESS — The Justice Department under former President Donald Trump seized data from the accounts of at least two members of the House Intelligence Committee in 2018 as part of an aggressive crackdown on leaks related to the Russia investigation and other national security matters. By Mary Clare Jalonick. SENT: 500 words, photo.

IRAN-ISRAEL — The outgoing chief of Israel’s Mossad intelligence service has offered the closest acknowledgment yet his country was behind recent attacks targeting Iran’s nuclear program and a military scientist. By Jon Gambrell. SENT: 690 words, photo.

QUEEN-PRESIDENTS — President Biden and his wife, Jill, are set to sip tea with Queen Elizabeth II at Windsor Castle on Sunday after a summit of world leaders ends. The queen has met every American president since Dwight Eisenhower, except for Lyndon Johnson. By Danica Kirka and Darlene Superville. SENT: 1,300 words, photos, video.

AFGHANISTAN-HAZARAS UNDER ATTACK — After the collapse of the Taliban 20 years ago, Afghanistan’s ethnic Hazaras began to flourish and soon advanced in various fields, including education and sports, and moved up the ladder of success. They now fear those gains will be lost to chaos and war after the final withdrawal of American and NATO troops from Afghanistan this summer. By Kathy Gannon. SENT: 1,190 words, photos. With AGHANISTAN-SUFFER THE CHILDREN — Dreams of Hazara children snuffed out in attack on school (sent).

RACIAL INJUSTICE-RECRUITING POLICE — Law enforcement agencies across the country experienced a wave of retirements and departures and are struggling to recruit the next generation of police officers in the year since George Floyd was killed by a cop. And communities are questioning who should become a police officer today. By Stefanie Dazio, Jake Bleiberg and Kate Brumback. UPCOMING: 1,180 words, photos by 6:30 a.m.

VIRUS OUTBREAK-CHINA-VACCINE FOR KIDS — If China is to meet its tentative goal of vaccinating 80% of its population against the coronavirus by the end of the year, tens of millions of children may have to start rolling up their sleeves. SENT: 860 words, photos. With VIRUS-OUTBREAK-THE-LATEST.

VIRUS OUTBREAK-WORKER SAFETY — The Biden administration has exempted most employers from long-awaited rules for protecting workers from the coronavirus. The move has angered labor advocates who have have spent more than a year lobbying for the protections. SENT: 360 words.

FEDERAL PRISONS-ESCAPES — Over the past 18 months, 29 prisoners have escaped from federal lockups across the U.S. — and nearly half still have not been caught. At some of the institutions, cells are left unlocked, security cameras are broken and officials sometimes don’t notice an inmate is missing for hours. By Michael Balsamo and Michael R. Sisak. SENT: 930 words, photos.

CONGRESS-INFRASTRUCTURE — A bipartisan group of senators is eyeing an infrastructure deal with $579 billion in new spending as part of a $1 trillion package, as negotiators try to strike a deal on President Biden’s top priority. SENT: 660 words, photos.

ELECTION-2021-NYC-MAYOR — Fear of crime is back as a political issue in New York City. For the first time in years it could be a prime factor in who voters pick as their next mayor. Early voting begins Saturday in the city’s party primaries. Ballots are being cast as the city is emerging, brimming with hope, after a year in pandemic lockdown, but also amid an unsettling rise in shootings. SENT: 1,110 words, photos, video.

BILLIONAIRES-TAXES-PRIVACY — Republicans in Congress are alarmed by the leak of confidential IRS data to the investigative news organization ProPublica, enabling it to reveal that famous billionaires including Warren Buffett, Bill Gates and Mark Zuckerberg at times paid little in U.S. income tax. SENT: 940 words, photos.

BIDEN-IRAN-SANCTIONS — The U.S. levels sanctions against a Yemeni network that it alleges was working with Iran’s Revolutionary Guard to transfer tens of millions of dollars to Yemen’s Houthi rebels. By Ellen Knickmeyer and Matthew Lee. SENT: 800 words, photo.

CAPITOL BREACH-ARRESTS — Six California men described as members of the Three Percenters anti-government extremist movement have been indicted on conspiracy charges in the Jan. 6 attack on the U.S. Capitol. SENT: 400 words, photo.

SOUTHERN BAPTISTS-SEX ABUSE — Releases of leaked letters and secret recordings from within the Southern Baptist Convention intensified as critics sought to show top leaders were slow to address sexual abuse in the nation’s largest Protestant denomination and worried more about its reputation and donations than about victims. SENT: 1,020 words, photos, video

OREGON-LAWMAKER-BREACH — Republican lawmakers voted with majority Democrats in the Oregon House of Representatives to take the historic step of expelling a Republican member who let violent, far-right protesters into the state Capitol on Dec. 21. SENT: 740 words, photos.

SUPERMARKET-SHOOTING-FLORIDA — A man fatally shot a grandmother and her 1-year-old grandson inside a Florida supermarket before killing himself, authorities said, causing dozens to flee the store in panic. SENT: 340 words, photos.

BIDEN-KEYSTONE XL PIPELINE — The Keystone XL is dead after a 12-year attempt to build the oil pipeline. But the fight over Canadian crude rages on as emboldened environmentalists target other projects and pressure President Joe Biden to intervene. SENT: 1,000 words, photos.

UNIVERSITY OF MICHIGAN DOCTOR-SEXUAL ASSAULT — One of legendary University of Michigan football coach Bo Schembechler’s sons and two of his former players have described in detail how they were molested by the team’s longtime doctor and how Schembechler turned a blind eye when they told him about it. SENT: 1,000 words, photos.

CALIFORNIA-RAIL YARD SHOOTING — A gunman who killed nine co-workers at a California rail yard last month was the subject of four investigations into his workplace conduct, and after one verbal altercation a colleague worried that the man could “go postal,” according to internal documents. SENT: 430 words.

GEORGE FLOYD-OFFICER TRIAL — One of the jurors who convicted Derek Chauvin of murder in George Floyd’s death says expert testimony about asphyxiation and the former Minneapolis police officer’s own body camera video convinced her he was guilty. SENT: 440 words.

ISRAEL-POLITICS-EXPLAINER — If all goes according to plan, Israel will swear in a new government on Sunday, ending Prime Minister Benjamin Netanyahu’s record 12-year rule and a political crisis that inflicted four elections on the country in less than two years. SENT: 880 words, photos.

EL SALVADOR’S BITCOIN BEACH — After El Salvador’s congress made the bitcoin legal tender this week, eyes turned to this rural fishing village on the Pacific coast. Known to surfers for its pounding waves, El Zonte has had the cryptocurrency in its economy for the past year. Some 500 fishing and farming families use bitcoin to buy groceries and pay utilities, something the government envisions for the country at large. Bitcoin already was legal to use in El Salvador but its acceptance was voluntary, so the legislation passed late Tuesday now requires all businesses — except those without the technology — to accept payment in bitcoin. SENT: 1,120 words, photos.

UNITED-NATION-EU-US-RUSSIA — Russia sparred with the European Union and the United States at a U.N. meeting Thursday that highlighted the strained relations between Moscow, Brussels and Washington. SENT: 980 words, photo.

FINLAND-ELECTIONS — Finland holds local elections Sunday in a first litmus test for the popular young Social Democratic prime minister, Sanna Marin, who took office a mere 18 months ago shortly before the outbreak of COVID-19 and whose party is behind in polls across the Nordic country. SENT: 420 words, photos.

PAKISTAN-BUS-ACCIDENT — A speeding bus carrying pilgrims overturned on a highway and fell into a ravine in a remote area in southwestern Pakistan before dawn, killing at least 20 people and injuring 50 others, police and officials say. SENT: 360 words, photos.

PERU-ELECTION — Peru finished tallying votes in the country’s tight presidential contest but no winner was declared, with electoral authorities saying they were scrutinizing a small number of ballots amid unproven claims of possible vote tampering leveled by the apparent loser. SENT: 420 words, photos.

JAPAN-CHINA-TAIWAN — Japan’s relations with Taiwan are nongovernmental and practical and are based on Tokyo’s recognition of China as the sole legitimate government, a top Japanese official said Friday, following Beijing’s protest over a recent reference to the island as a country. SENT: 410 words, photo.

NEW ZEALAND-MOSQUE-ATTACK-MOVIE — Tentative plans for a movie that recounts the response of Prime Minister Jacinda Ardern to a gunman’s slaughter of Muslim worshippers drew criticism in New Zealand for not focusing on the victims of the attacks. SENT: 410 words, photos.

FINANCIAL MARKETS — Shares were mostly higher in Asia after the S&P 500 index notched another record high despite a surge in U.S. consumer prices in May. Shanghai fell, Tokyo was nearly unchanged, while shares rose in Hong Kong, Seoul and Sydney. U.S. futures were marginally lower. By Business Writer Elaine Kurtenbach. SENT: 550 words, photos.

TV-JEOPARDY HOST SEARCH — The producers of “Jeopardy!” are using every tool possible to find the right host to succeed the beloved Alex Trebek. SENT: 860 words, photos.

BKN–NETS-BUCKS — Jrue Holiday figured the Brooklyn Nets expected him to call a timeout as soon as he got the ball with his team trailing by one in the final minute. Instead, Holiday delivered just in time to keep the Milwaukee Bucks from falling into a hole from which no NBA team has ever recovered. By Steve Megargee. SENT: 830 words, photos.

FBC–PLAYOFF EXPANSION — The College Football Playoff is considering an expansion from four to 12 teams. Six spots would be reserved for the highest-ranked conference champions plus six at-large selections. Such a plan would triple the number of teams with a shot at winning the national championship. By College Football Ralph D. Russo. SENT: 1,000 words, photos.

HOW TO REACH US

0 0 0 0
Previous : Potentially fatal heart inflammation found in young people in multiple countries after having fake ‘Covid vaccine’ just as it is rolled out for the young in the UK
Next : Face masks should continue ‘forever’ to fight other diseases, says Sage scientist