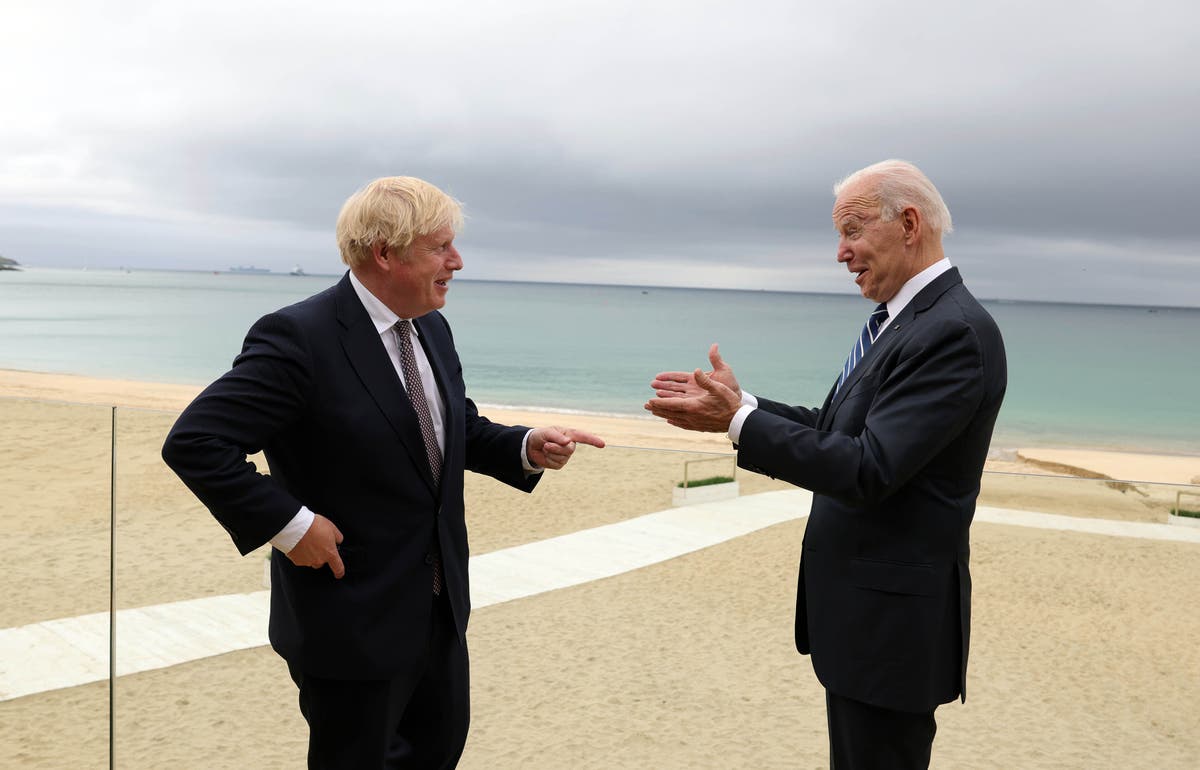 Emmanuel Macron has launched an angry attack on the UK’s failure to implement the Brexit deal for Northern Ireland, wrecking Boris Johnson’s attempts to claim there is “harmony” at the G7 summit.

The French president branded the prime minister’s attempt to reopen the legal protocol governing trade across the Irish Sea as “not serious”, saying: “Nothing is renegotiable.”

The attack – ahead of a face-to-face meeting with Mr Johnson in Cornwall – came after the US issued the UK with an extraordinary diplomatic rebuke for putting the Northern Ireland peace process in jeopardy.

Joe Biden’s top diplomat in London warned David Frost, the Brexit minister, that the government is “inflaming” tensions by refusing to introduce checks at ports, revealed in a memo which No 10 did not deny.

At the G7, Mr Johnson and Mr Biden held talks for one hour and 20 minutes and emerged, Downing Street claimed, “in complete harmony” on the Northern Ireland controversy.

But the tensions exploded immediately afterwards, at Mr Macron’s press conference in Paris and ahead of a showdown between the prime minister and the European Commission on Friday.

The UK has hinted it will unilaterally shelve an agreed ban on chilled meat exports from Britain to Northern Ireland, due to kick in at the end of June – having delayed earlier promised checks on goods.

The French president said: “I think it is not serious to want to revisit, in the month of July, what we finalised after years of work on [in] December.

“We have a protocol, an agreement of separation in the framework of which is Northern Ireland and a trade treaty.

“If after six months you say we cannot respect what was negotiated, then that says nothing can be respected. I believe in the power of treaties. I believe in seriousness. Nothing is renegotiable. Everything is applicable.”

Brussels is ready to slap tariffs and quotas on UK exports, unless it backs down – and even to “suspend” other parts of the Brexit trade deal, possibly hitting fishing and even power supplies.

The government memo, revealed by The Times, said the US had “strongly urged” Britain to reach a settlement, even accepting “unpopular compromises” to end the stalemate.

It stated that Yael Lempert, chargé d’affaires at the US embassy in London, had “implied that the UK had been inflaming the rhetoric, by asking if we would keep it ‘cool’”.

In Cornwall, Mr Biden avoided a direct confrontation, No 10 insisting he had not raised concerns about the Northern Ireland Protocol as the two leaders stressed their shared “commitment to the Good Friday Agreement”.

They were in “in complete harmony on this issue”, Mr Johnson’s spokesman said. However, he did not deny the demarche, saying: “I wouldn’t get into the details of the discussions countries have.”

On Mr Macron’s attack, the spokesman claimed: “We are absolutely acting in accord with what was achieved and what was set out [in the Protocol].”

Mr Johnson described the president as a “breath of fresh air” after the meeting, while Mr Biden stressed the UK-US “special relationship” – a term the prime minister is believed to dislike as “needy”.

They also agreed “to work to reopen travel”, but the rumoured announcement of a UK-US travel corridor – to spare vaccinated visitors the need to quarantine – still appears some way off.

Likewise, although they reaffirmed their desire for a post-Brexit free trade deal, there is no sign of negotiations starting. “I don’t have specific date for further talks,” Mr Johnson’s spokesman admitted.

An exchange of gifts saw the prime minister present the president with a framed photograph of the anti-slavery campaigner and former slave Frederick Douglass.

In return, Mr Johnson was given a US-made bike and helmet, while his new wife Carrie received a leather tote bag made by military wives and a presidential silk scarf.

0 0 0 0
Previous : Millennial millionaires have a large share of their wealth in crypto, CNBC survey says
Next : Passenger fight leads to cell phone fire and causes flight to be rerouted