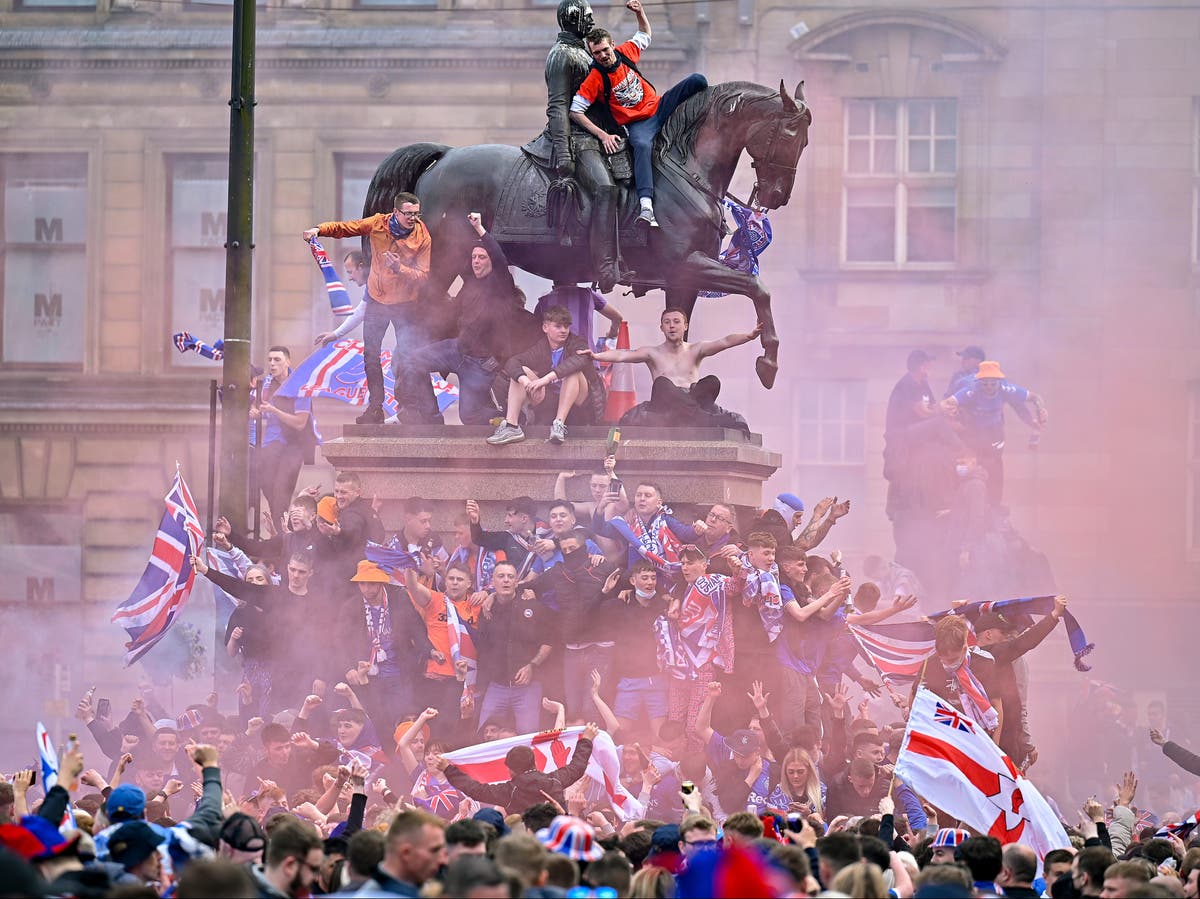 Rangers fans are set to be removed from Glasgow’s George Square as police confirmed that “rising disorder” meant they would be forced to impose public order legislation.

Thousands of fans took to the city’s streets on Saturday after the football team won its first Scottish Premiership trophy in a decade, despite warnings against gathering due to coronavirus restrictions.

Scotland’s Ch Supt Mark Sutherland said that due to the “rising level of disorder taking place and the threat to public safety” Police Scotland would be forced to “make use of powers available to officers under Section 14 of the Public Order Act 1986 to disperse those who have chosen to gather there”.

“This decision has not been taken lightly, the senior police officer on the ground will give direct instructions to those gathered and anyone in George Square should leave immediately,” he added.

Police also confirmed they had made arrests in relation to anti-social behaviour, but a senior officer reportedly admitted it would not have been proportionate to disperse the crowd at George Square by force.

Over 20 officers are understood to have surrounded fans at the central landmark, with some being seen to confiscate alcohol and pour it away while instructing revellers to “disperse and take personal responsibility” for their actions.

After the trophy was lifted, many fans made their way into the heart of Glasgow, at which point the Union Bears fan group announced plans to walk from the stadium to George Square.

Despite an earlier request for a fan procession to the city centre being declined by police, officers later decided to escort large groups of supporters as they made their way to George Square in order to minimise disruption.

The Scottish government previously criticised Rangers’ response after thousands of fans gathered outside Ibrox, and in George Square, on the weekend they actually won the title back in early March.

“Today is understandably a significant day for Rangers Football Club and its supporters,” Ch Supt Sutherland said earlier today, adding: “We are however still in the midst of a pandemic and under coronavirus restrictions people should not be gathering for any reason. The overarching aim of Police Scotland’s operation today remains public safety.”

It comes after Nicola Sturgeon issued a plea to residents of Glasgow’s southside – where she is the incumbent MSP – to get tested to help the government quash the current spike in cases, including the detection of India’s highly contagious variant.

“If you live in – or have recently spent time in – the Southside of Glasgow, PLEASE help get this outbreak under control by taking a test,” the first minister tweeted on Saturday. “I’ve just done so myself – thankfully negative!”