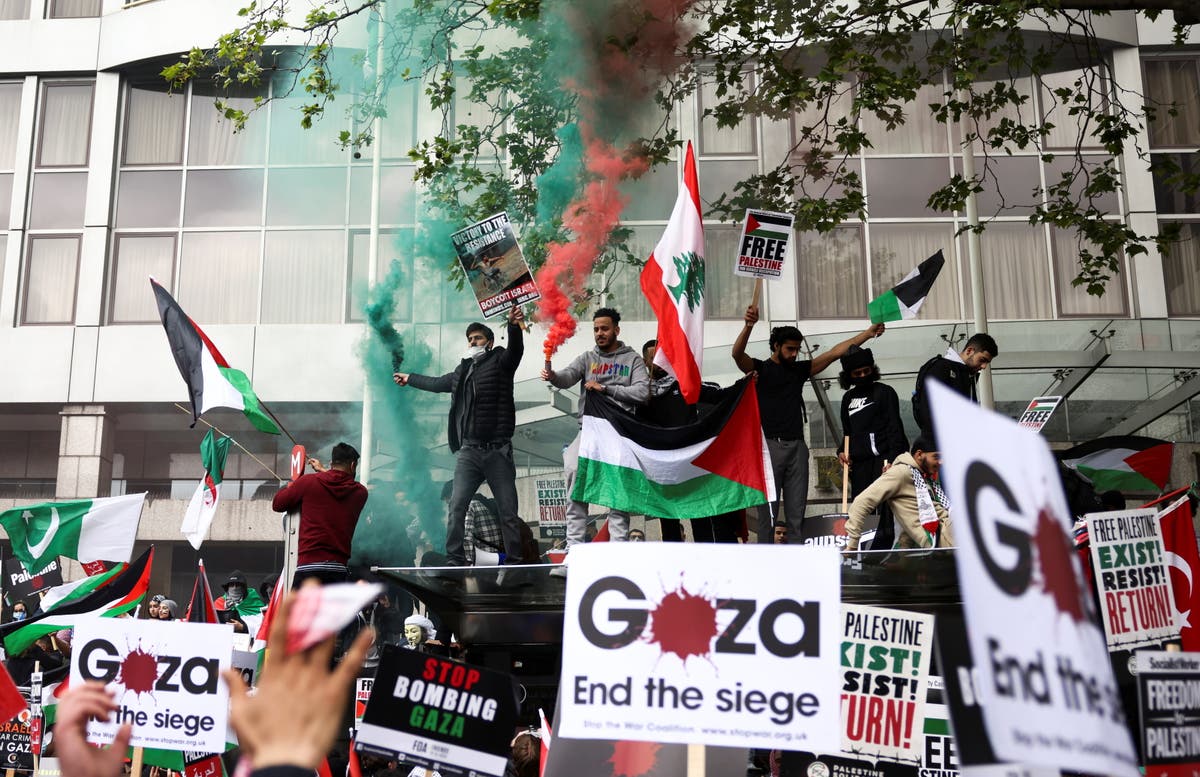 Israel-Gaza: London protesters take to streets in support of Palestine

Protesters took to the streets in London on Saturday to oppose violence in Israel and to show solidarity with Palestinians in Gaza.

The demonstration in London was organised by Palestine Solidarity Campaign, Friends of Al-Aqsa, Palestinian Forum in Britain, Stop the War Coalition, Campaign for Nuclear Disarmament and the Muslim Association of Britain.

Organisers of the march said they were protesting against evictions of Palestinians from Sheikh Jarrah (a predominantly Palestinian area of east Jerusalem), the bombing of Gaza and the deaths of Palestinian civilians.

They called for the UK government to take “immediate action”, saying: “It must stop allowing Israel’s brutal violence against and oppression of the Palestinian people to go unpunished.”

In London, videos showed protesters waved Palestinian flags and shouted “Free Palestine”, with others chanting “Israel is a terror state”.

The former shadow home secretary, Diane Abbott, addressed the crowds, describing protesters as part of a “worldwide movement for justice”.

She said: “Palestinian people are having their land seized … and they are now being killed in their homes.

“All of this is illegal.”

The former Labour leader, Jeremy Corbyn, and MP for Coventry South, Zarah Sultana, were also expected to address the crowds.

Organisers of the London march said: “The bombardment of Gaza which is killing civilians including children is a war crime.

“The UK government is complicit in these acts as long as it continues to offer Israel military, diplomatic and financial support.”

Husam Zumlot, Palestinian ambassador to the UK, said: “This time is different. This time we will not be denied any more. We are united. We have had enough of oppression.

“Today, we are saying enough; enough with the complicity. Thank you for standing with us.”

Protests also took place in Bristol, Manchester and elsewhere in the UK, with a demonstration planned in Glasgow’s George Square tomorrow.

Metropolitan Police said on Twitter: “A large group has gathered outside the Israeli Embassy in South Kensington. Officers are on site and continue to engage with those taking part in the demonstration. Drivers are warned to expect traffic disruption in the area.”

Meanwhile, earlier today, Israeli military bombed the Gaza offices of media outlets including Al Jazeera and AP, in a move viewed by many as an attack on press freedom.

This followed an Israeli air raid in Gaza city killed at least 10 Palestinians in the deadliest single strike since violence erupted in the region earlier this week.

The strike on a three-storey house in a refugee camp in the city is understood to have killed eight children and two women from an extended family.

0 0 0 0
Previous : TERENCE MCKENNA'S MISSION – What Did You Do To Help Save The World – Terence McKenna In Reconnect
Next : How To Raise Human Consciousness – Reconnect By London Real – Trailer