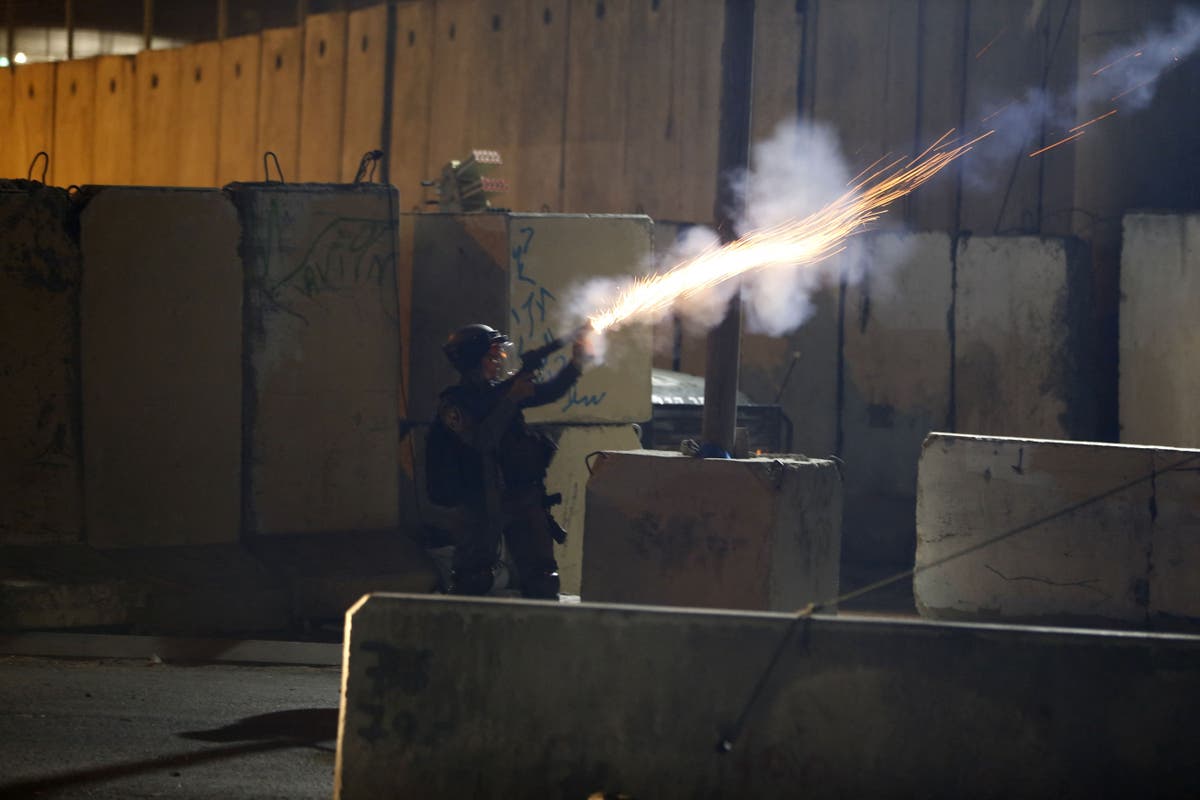 Israeli paramedics have confirmed that two women were killed in rocket attacks in southern Israel today as the crisis in Jerusalem deepens.

Both victims reportedly died after one rocket hit a residential building and two landed in an open area. A third person is thought to be in a critical condition.

It comes as the first funerals have been held for some of the 26 people killed – including nine children – in a wave of Israeli airstrikes on Gaza.

The youngest victim was 10 years old, Gaza health officials told The Independent. More than 700 Palestinians have been injured since the outbreak of violence in the West Bank, Gaza and Jerusalem, including around the Al-Aqsa mosque compound.

On Monday, Palestinian militants in the Gaza Strip fired rockets towards the Jerusalem area and southern Israel, which Benjamin Netanyahu, Israel’s prime minister, said had crossed a “red line”. Israel said six civilians were hurt in the barrage.

Videos posted on social media showed Israeli police firing tear gas and stun grenades, some of them landing inside Jerusalem’s Al-Aqsa mosque, in the latest in a series of confrontations that is pushing the contested city to the brink of eruption.

Israeli airstrikes have destroyed a 12-story building in Gaza City that housed the offices of Hamas officials.

Tuesday’s airstrikes shook buildings as far as 3 kms (2 miles) away. Israeli drones fired a series of warning shots at the roof to give people time to leave the building before it was destroyed by the military.There were no immediate reports of casualties.

But the airstrike marked another escalation in Israel’s offensive against Hamas.Hamas earlier threatened to strike the Israeli metropolis of Tel Aviv if Israel continued striking buildings in Gaza.

International Committee of the Red Cross calls for end to violence

The International Committee of the Red Cross (ICRC) called on all sides in the conflict between Israel and Hamas-run Gaza on Tuesday to de-escalate the violence that has killed at least 30 people and reminded them of the rules of war.

The ICRC regional director for the Middle East, Fabrizio Carboni, said in a statement sent to Reuters that international humanitarian law prohibits indiscriminate attacks against civilians, any attack must be proportionate, and all necessary precautions must be taken to avoid civilian casualties.

He called for “rapid, safe and unimpeded movement for ambulances” and for staff and volunteers of both the Palestine Red Crescent Society and the Magen David Adom Society in Israel.

Israel’s police chief is beefing up deployments across the country in response to a wave of unrest.

Koby Shabtai issued the order on Tuesday as crowds set a police cruiser, motorcycle and bus on fire during protests in the central city of Lod.

Protests were expected in dozens of other Arab communities across the country.

In a statement, police said Shabtai instructed his commanders “to intensify police presence on the streets” following widespread unrest and protests in dozens of Arab communities across the country Monday night.

The mounting unrest came at a time of heightened tensions following weeks of violence in Jerusalem and heavy fighting between Israel and Hamas militants in the Gaza Strip in the past day.

Earlier in the day in Lod, Israeli police fired tear gas and stun grenades after mourners started throwing stones at officers during the funeral of an Arab man allegedly killed by a Jewish resident in the area.

The head of the Arab League condemned on Tuesday Israeli air strikes on the Gaza Strip as “indiscriminate and irresponsible” and said Israel had provoked an earlier increase in violence by its actions in Jerusalem.

“Israeli violations in Jerusalem, and the government’s tolerance of Jewish extremists hostile to Palestinians and Arabs, is what led to the ignition of the situation in this dangerous way,” Arab League chief Ahmed Aboul Gheit said in a statement.

The attacks in Gaza were a “miserable show of force at the expense of children’s blood”, he said, adding that “Israeli provocations” were an affront to Muslims on the eve of the Eid holiday at the end of the holy month of Ramadan.

Israel Defence Forces (IDF) has in the last few minutes tweeted that the commander of the Hamas anti-tank missile unit, Iyad Fathi Faik Sharir is dead.

The social media posting adds that he was “in charge of carrying out anti-tank missile attacks on Israel.”

In the tweet it also confirmed the IDF is still striking additional targets in Gaza.

The head of the Norwegian Refugee Council has urged both Israel and the Palestinians “to avoid further escalation and prevent loss of life,” saying that civilians, and specifically children, pay “the heaviest price”.

The organisation’s chief, Jan Egeland, said on Tuesday that civilians “once again” were “bearing the brunt of a dramatic escalation in hostilities.”

He added that children, whether they are Palestinian or Israeli, are left with “not only physically scarred but also emotionally damaged.”

The Oslo-based group called on “all parties to the conflict to stop the provocations and to ensure that civilians are protected.”

Egeland said in a statement that the latest events “also shows that the prolonged conflict and occupation are unsustainable.”

“It’s the first time since 2014 that [Palestinian militants] have fired at Jerusalem. And the fire  is more intense than what we have seen since 2014,” he added.

Conricus said they had beefed up their presence on the border, deploying additional battalions for defensive purposes and reinforcing their fire capability.

He said from their analysis the payload from rockets in Gaza had grown but that an abnormal amount of rockets  – about a third fired – were falling short in Gaza.

The crisis between Israel and Hamas in Gaza edged towards all out conflict as both sides suffered fatalities and vowed to continue exchanging fire.

Burials began Tuesday for 26 Palestinians killed overnight by airstrikes in Gaza, and two people died in the southern Israeli town of Ashkelon following a rocket barrage fired from the Hamas-controlled enclave.

The surge in deadly violence was triggered by unrest in Jerusalem which saw Israeli police storm Al Asqa Mosque in Jerusalem with stun grenades and tear gas and Palestinians throw rocks, bottles and fireworks at police.

With tensions high, both sides stood on the precipice of all out war on Tuesday, writesThe Independent’s Bel Trew in Ashkelon.

The footage recorded by Trew during the chaos shows her helping an elderly woman in a wheelchair as people run to take shelter within a nearby building.

“It’s the first time since 2014 that [Palestinian militants] have fired at Jerusalem. And the fire  is more intense than what we have seen since 2014,” he added.

Protests outside Israeli Embassy in Spain

A few dozen people have gathered outside the Israeli Embassy in the Spanish capital Madrid to protest Israel’s use of force against the Palestinians.

Most of the crowd on Tuesday in waved Palestinian flags. They shouted “Israel, assassin of the Palestinian people” and “it’s Palestine, not Israel”.

Some held up photos of Palestinians being arrested by Israeli forces. All wore face masks as stipulated by Spanish health laws to fight the coronavirus pandemic.

0 0 0 0
Previous : Fishmongers’ Hall terrorist monitored by ‘inexperienced, untrained’ police officers whose previous subject planned an attack
Next : Lex Greensill denies his company was a Ponzi scheme as he blames insurers for collapse