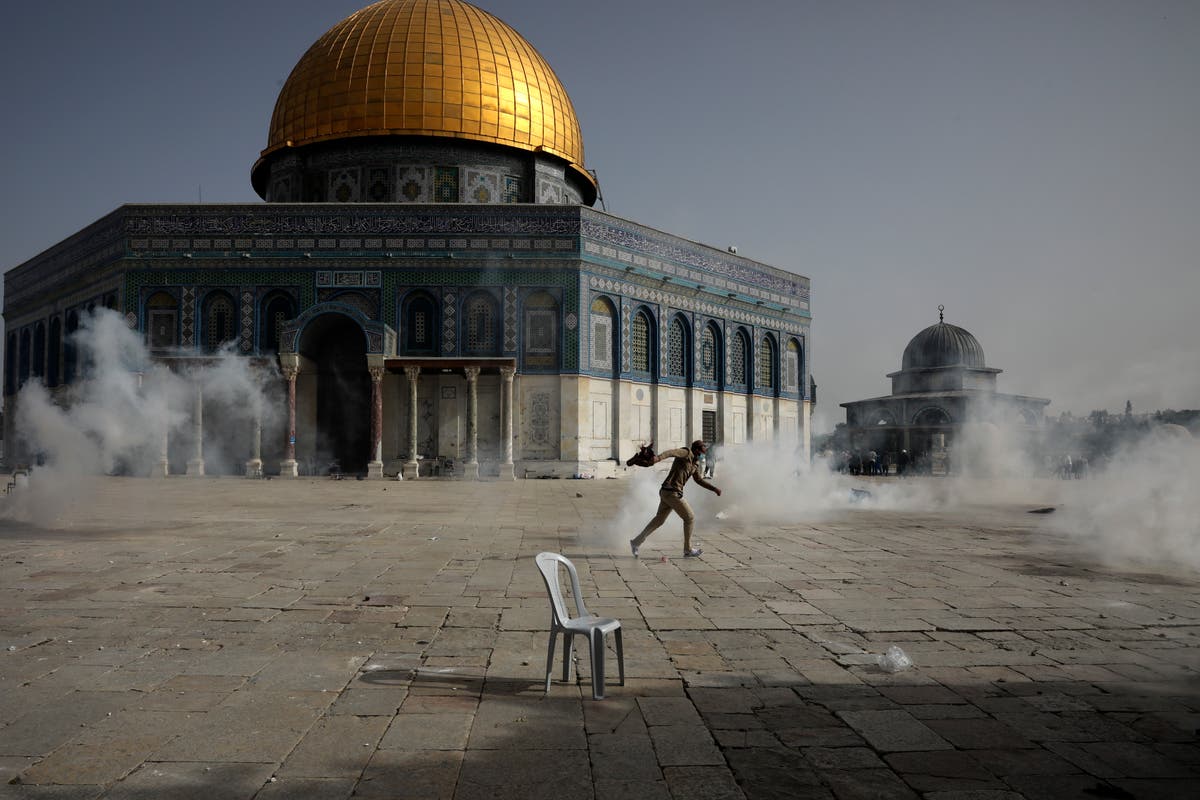 Twenty people – including nine children – have been killed in airstrikes on Gaza, the health ministry has said.

On Monday, Palestinian militants in the Gaza Strip fired rockets towards the Jerusalem area and southern Israel, carrying out a threat to punish Israel for violent confrontations with Palestinians in Jerusalem.

Benjamin Netanyahu, Israel’s prime minister, accused the Hamas militant group of crossing a “red line” with its rocket attack on Jerusalem and promised a tough response.

Hundreds of Palestinians have also been injured during violence in and around the Al-Aqsa Mosque compound in Jerusalem.

Video footage posted on social media showed Israeli police firing tear gas and stun grenades, some of them landing inside the mosque, in the latest in a series of confrontations that is pushing the contested city to the brink of eruption.

US says rocket attacks on Israel must stop ‘immediately’

The US secretary of state, Antony Blinken, has said the rocket attacks from Gaza against Israel should stop “immediately,” and he urged all sides to take steps to de-escalate the situation.

“We’re very focused on the situation in Israel, West Bank, Gaza, very deeply concerned about the rocket attacks that we’re seeing now, that they need to stop, they need to stop immediately,” Mr Blinken said ahead of his meeting with Jordan’s foreign minister, Ayman Safadi, at the State Department.

Mr Blinken also expressed concerns about the violence and “provocative actions” in and around Haram al-Sharif, the hilltop compound in Jerusalem’s walled Old City known to Jews as the Temple Mount.

Twenty people have been killed in airstrikes on Gaza, health ministry says

Twenty people have been killed in airstrikes on Gaza, according to the health ministry, after Israel bombed the blockaded enclave after Hamas fired a barrage of rockets towards Jerusalem.

Gaza health officials told The Independent that nine children were among the 20 dead and the youngest victim was just 10 years old. A further 65 people were injured.

Earlier, Israel had warned that Palestinian militants would pay a “heavy price” for launching rockets towards Jerusalem.

Palestinian health officials in the Gaza Strip say a total of 20 people, including nine children, have been killed in fighting with Israel.

The death toll made it one of the bloodiest days of fighting in several years. The Health Ministry did not provide a breakdown on the cause of deaths.

At least seven members of one family, including three children, were killed in an explosion in northern Gaza whose origins were unknown.

The Isareli military said it struck a number of Hamas targets in response to continued rocket fire out of Gaza. It said eight militants were struck.

A rocket attack from Gaza was launched toward Jerusalem on Monday, following another day of violence.

The Israeli army said seven rockets were fired towards Jerusalem and nearby Beit Shemesh, one of which was intercepted by the Iron Dome defence system.

Hamas said it was responsible for firing the rockets, saying they were launched as a response to Israeli “crimes and aggression”.

US Secretary of State Antony Blinken said the rocket attacks from Gaza against Israel should stop “immediately,” and he urged all sides to take steps to de-escalate the situation.

“I am deeply concerned about the rocket attacks,” Mr Blinken said in brief remarks ahead of a meeting with Ayman Safadi, the Jordanian foreign minister.

Meanwhile over in the US, a spokesperson for the State Department said rocket attacks by Palestinian militants in the Gaza Strip into Israel were an “unacceptable escalation” after violent confrontations with Palestinians in Jerusalem.

Ned Price said the US was “fully engaged” to promote calm in Jerusalem.

The UK’s foreign secretary has condemned the “firing of rockets at Jerusalem and locations within Israel”:

Israeli Lieutenant-Colonel Jonathan Conricus said at least six of the 45 rockets fired from Gaza were launched towards Jerusalem’s outskirts, where a house was hit. No casualties were reported.

“We have started to attack Hamas military targets,” he said in a briefing to foreign reporters, putting no timeframe on any Israeli offensive. “Hamas will pay a heavy price.”

He said Israel had carried out an air strike in northern Gaza against Hamas militants and was looking into reports that children were killed.

“We had multiple events of rockets fired by Gaza terrorists falling short. This might be the same,” Lt Col Conricus said.

‘Whoever attacks us will pay a heavy price’ – Israel PM

Benjamin Netanyahu, Israel’s prime minister, has accused the Hamas militant group of crossing a “red line” with its rocket attack on Jerusalem and promised a tough response.

“We will not tolerate an attack on our territory, in our capital, on our citizens and soldiers. Whoever attacks us will pay a heavy price,” he said.

A tree caught fire outside al Aqsa mosque but the blaze was quickly put out and no damage was caused to the mosque, witnesses told Reuters.

Tension has been high in Jerusalem and the witnesses said the blaze was caused accidently by Palestinians who had thrown fireworks.

Israeli police and Palestinians had clashed at the site earlier in the day.

0 0 0 0
Previous : Florida court rules against Black mother arrested for filming police detaining her son
Next : Can Keir Starmer get Labour back on track?