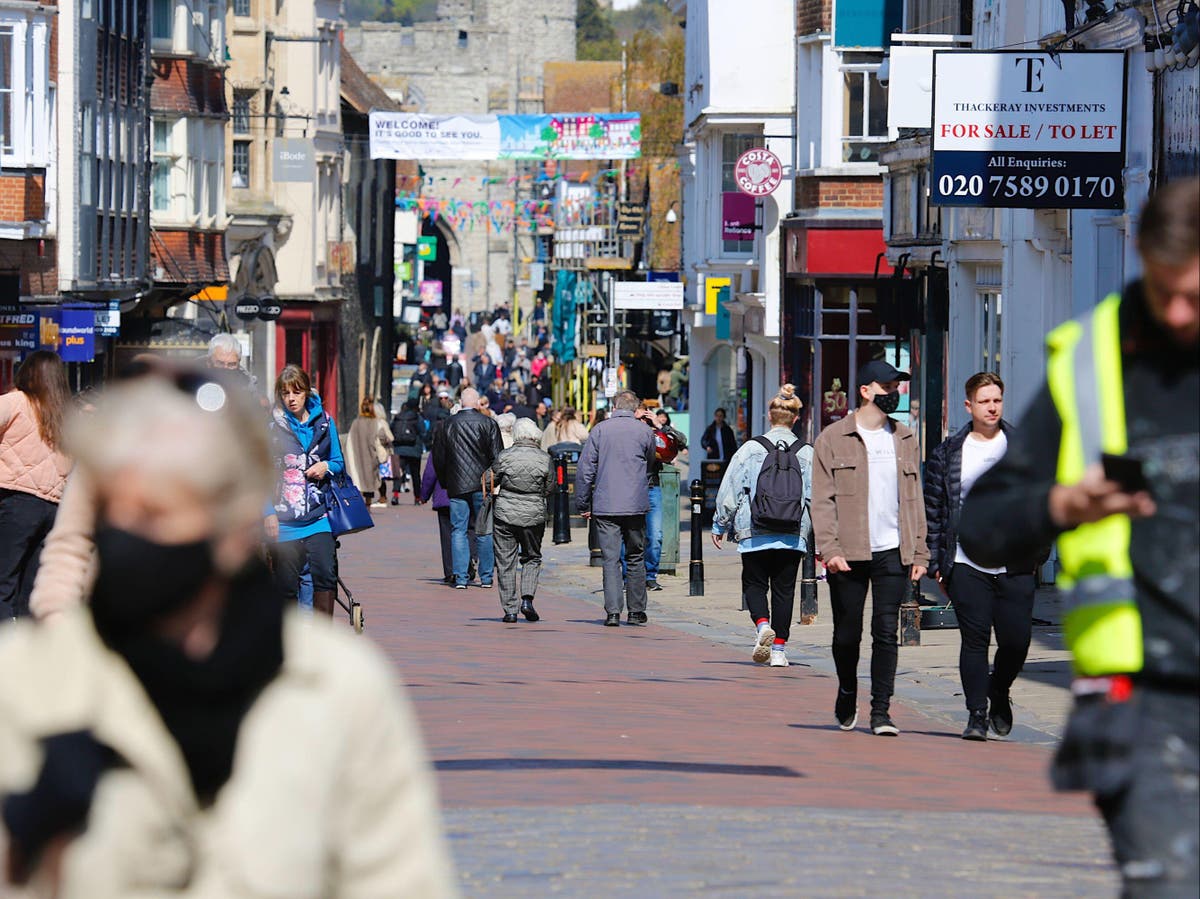 Visits to UK shops rose dramatically in April as coronavirus restrictions were lifted, but stayed well below levels seen before the pandemic, new data shows.

Retail footfall in April was 240.8 per cent higher than the same month last year when the country was fully locked down, according to research company Springboard. However, the new figure was still nearly one-third (32.7 per cent) below April 2019’s levels.

A sluggish start to April 2021 improved for retailers once non-essential shops and outdoor hospitality venues were allowed to open, Springboard found. The firm expects further recovery from mid-May when indoor socialising is permitted.

In the first week of April, UK high streets reported a 65.1-per-cent slide in footfall against the same period for 2019, which recovered to a decline of 32.3 per cent for the second, third and fourth weeks.

Overall the high street footfall decline was 41.5 per cent in April compared to 2019, but retail parks proved to be more resilient, notching only a 7.4-per-cent drop in visits.

Springboard’s marketing and insights director, Diane Wehrle, said: “The results for the month reflect our predictions for a substantial boost to footfall following retail reopening and is evidence of significant pent-up consumer demand for bricks-and-mortar stores.

“This pent-up demand is also reflected in the UK store vacancy rate which strengthened in April to 11.5 per cent from 11.7 per cent in January.

“At least part of this is likely to be due to the increasing emergence of pop-up stores and the trend for digital brands to bring their brands to life via physical space.

“With the imminent opening of indoor hospitality in the next two weeks, we are anticipating that the gap between the level of footfall in 2019 and 2021 will narrow further, although the extent to which this occurs will be a function of the degree to which there is a return to office working, the growth in both domestic and overseas tourism in the UK and the impact on employment of the end of the furlough scheme in September.”

The new data came a day after Debenhams, a casualty of lockdown’s impact on in-person shopping, revealed the date on which its last physical shops would close.

The chain’s remaining sites will shut for good on Saturday 15 May, following its collapse into administration at the end of 2020.

Meanwhile, shoppers are reportedly becoming more confident about returning to supermarkets instead of relying on internet deliveries.

The BBC reported NielsenIQ, a research firm, as saying that online sales growth had slowed to 25 per cent in April following a massive rise during lockdown, while visits to physical supermarkets rose by 3 per cent.

0 0 0 0
Previous : Brexit causes difficulties for more than 60 per cent of UK firms – report
Next : Biden bemused by GOP infighting over Liz Cheney