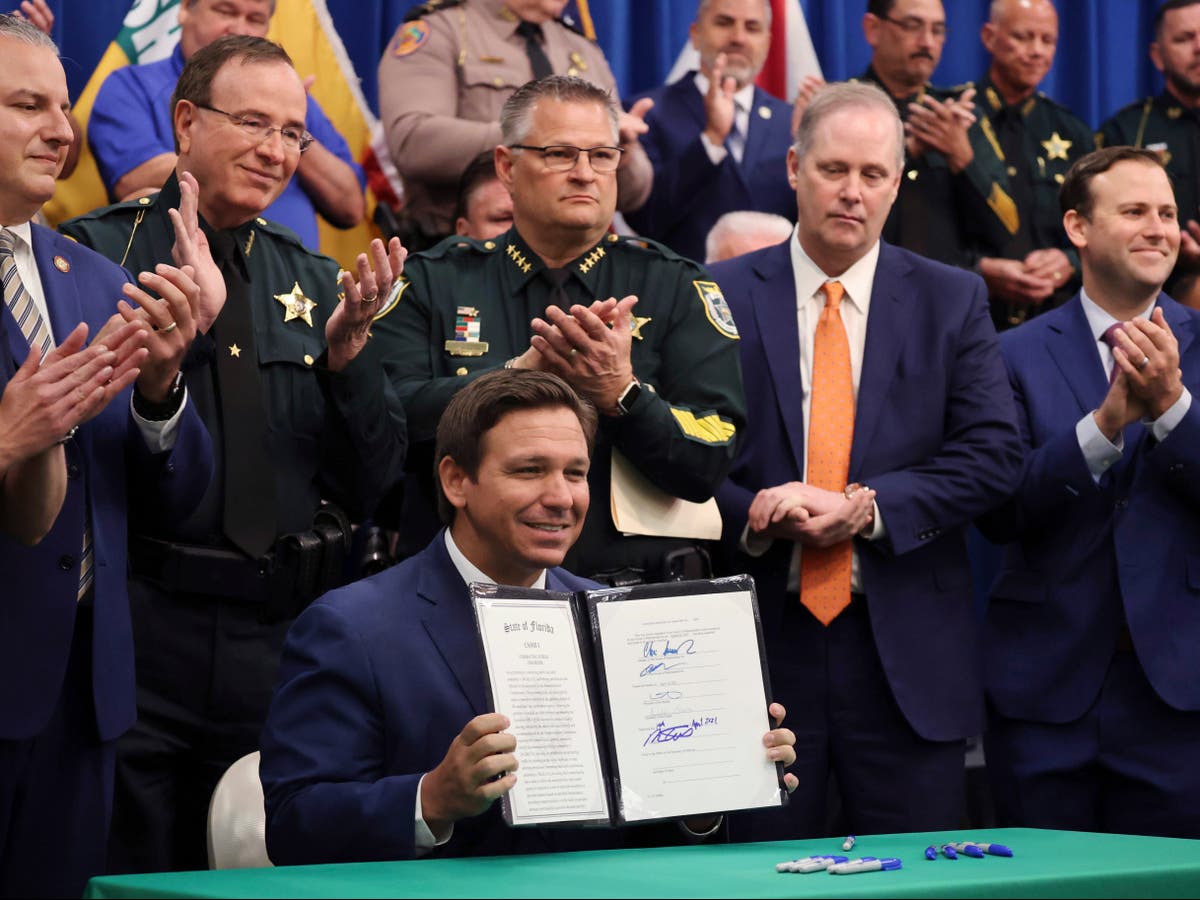 What is in the Florida anti-riot bill branded a ‘disgrace’ by critics?

The Republican governor of Florida Ron DeSantis signed a so-called “anti-riot” bill on Monday that critics have slammed as a “disgrace” for supposedly being aimed at cracking down on social justice protests.

The bill has been blasted for being too broad and vague. It goes after protesters who partake in riots, who deface historical monuments, and who block highways and streets. It makes blocking a highway a felony, elevating it from misdemeanour status. The bill also provides civil legal immunity for those who drive their cars into crowds blocking streets.

Cars have hit demonstrators at least 100 times since the protests started in response to the death of George Floyd, who died on 25 May 2020 under the knee of former Minneapolis police officer Derek Chauvin.

The legislation makes “mob intimidation” illegal and defines the phrase as three or more people using force or the threat of it “to compel or induce, or attempt to compel or induce, another person to do or refrain from doing any act or to assume, abandon, or maintain a particular viewpoint against his or her will”.

The law also strengthens protections for law enforcement. The minimum prison sentence for “battery upon a law enforcement officer committed in furtherance of a riot” is six months.

State attorneys and city commissioners will be able to appeal any decision by a locality to reduce funding for law enforcement to a state administration commission.

Mr DeSantis said: “If a local government were to [defund the police], that would be catastrophic and have terrible consequences for their citizens. We’ll be able to stop it at the state level.”

People will be able to sue local governments over damage done to their property or any personal injury inflicted on them if a local governing body is found to have impeded law enforcement action against civil unrest.

Mr DeSantis added: “We saw last summer, some of the local governments were actually telling, not necessarily in Florida, but throughout the country, basically telling police to stand down while cities burned. That’s a dereliction of duty.”

The law broadens what can be categorized as a misdemeanour during a protest. Anyone who is charged under this part of the law will be denied bail until their first appearance in court. Mr DeSantis argued that this was an effort to stop people from rejoining ongoing protests.

The bill specifically states that it “does not prohibit constitutionally protected activity such as a peaceful protest,” but has still been criticised by Democrats and activists who say it will weaken basic freedoms, push back on political dissent, and target people of colour more than other groups.

Independent columnist Corey Hill argued that the winners of the bill are “authoritarianism and the threat of violence against marginalized communities. Republicans are calling it an anti-riot bill. The reality is that it’s anti-democratic, anti-public safety, and anti-American”.

On 15 April, when the legislature passed the bill, Micah Kubic, executive director of the ACLU of Florida said: “It is clear that Governor DeSantis and certain legislative members are aiming to shut down political speech they disagree with in a direct attack on the First Amendment and at the cost of Black and brown people. This bill is a disgrace to our state.”

Civil rights groups and state Democrats have said that the bill violates the First Amendment. They say that under the new law, someone could be taking part in a peaceful protest that turns violent and face felony charges despite not taking any violent action themselves.

0 0 0 0
Previous : Primark owner to pay back £121m in furlough cash despite falling sales
Next : Video gaming could be prescribed to treat Covid ‘brain fog’, say scientists