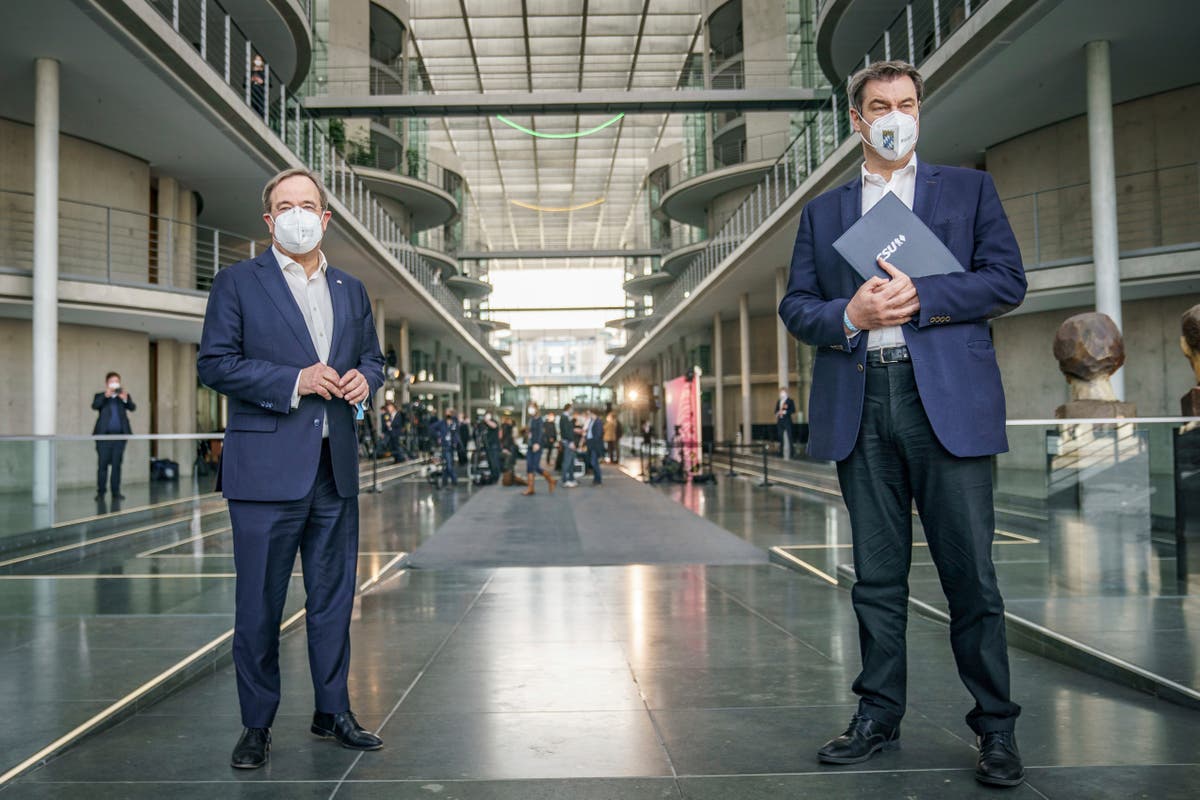 Germany’s environmentalist Greens were set to announce Monday who will make the party’s first run for the chancellery in September’s national election, while a power struggle in Chancellor Angela Merkel s center-right bloc entered its second week.

The Greens’ smooth staging of the announcement of which of their co-leaders, Annalena Baerbock or Robert Habeck, will seek Germany’s top job contrasts with the increasingly heated standoff in Merkel’s Union bloc.

The Sept. 26 parliamentary election is unpredictable, in part because the incumbent isn’t seeking re-election. Merkel vowed in 2018 not to seek a fifth four-year term, and no single obvious successor was ready to step up.

The governors of Germany’s two most populous states, Armin Laschet and Markus Soeder are battling for the center-right nomination to succeed her. They missed a self-imposed deadline to agree by Sunday.

Recent polls have shown the Greens running second behind the Union and ahead of Germany’s traditional big center-left party, the Social Democrats

Baerbock and Habeck have led the Greens since early 2018. A pragmatic and harmonious duo, they have presided over a rise in poll ratings. The Greens are in opposition nationally but sit in 11 of Germany’s 16 state governments.

Baerbock, 40, has been a lawmaker in the national parliament since 2013 but lacks government experience. Habeck, 51, served for several years as the agriculture and environment minister of the northern state of Schleswig-Holstein.

The choice of candidate will need endorsement from a party congress in June.

The Greens last month unveiled a program that proposes speeding up Germany’s exit from coal-fired power, raising carbon prices and massively increasing infrastructure spending. They are pro-European Union and take a tough line toward Russia, calling for an end to the Nord Stream 2 gas pipeline project.

“For the first time … the political alternative will be green against black,” the color of the Union, Green former Environment Minister Juergen Trittin told ZDF television. “The question is: should we make this country fit for the future through climate protection, or do we just want retention of power at any price — the performance the Union is staging now.”

Whatever the election outcome, the Greens may hold the key to forming the next government.

The traditionally left-leaning and once notoriously chaotic party was the junior partner in center-left Chancellor Gerhard Schroeder’s government from 1998 to 2005. It has become increasingly open to alliances with center-right parties, and is part of a wide variety of coalitions at state level.

Merkel’s Union bloc, meanwhile, was still waiting for a candidate on Monday.

Laschet, the leader of Merkel’s Christian Democratic Union, and Soeder, the head of its smaller Bavarian sister party, the Christian Social Union, both declared their interest in running for chancellor on April 11.

They didn’t specify how they would decide their competition. A standoff ensued that many supporters fear could cause lasting damage.

Laschet and Soeder are the state governors of North Rhine-Westphalia and Bavaria respectively. Soeder has much better poll ratings, but Laschet is the recently elected leader of by far the bigger of the sister parties.

Last Monday, Laschet rallied the CDU leadership behind his bid and called for a quick decision. But Soeder said the matter shouldn’t be resolved “only in a small back room.”

On Tuesday, the contenders addressed a meeting of the Union bloc’s joint parliamentary group that laid bare divisions in the CDU. Parts of Merkel’s party favor Soeder, while others are appalled by his power play for the top job.

German media reported that Laschet, Soeder and close aides met late Sunday night, apparently without a result. Shortly before, leaders of the Union’s youth wing had come out for Soeder.

The Social Democrats, who provided three of Germany’s eight post-World War II chancellors but have long been stuck in a poll slump, nominated Finance Minister Olaf Scholz as their candidate for chancellor months ago.

0 0 0 0
Previous : Cancer researchers working through night to catch up after pandemic forced labs to close
Next : Coronavirus news live: India Covid mutation ‘likely to be variant of concern’