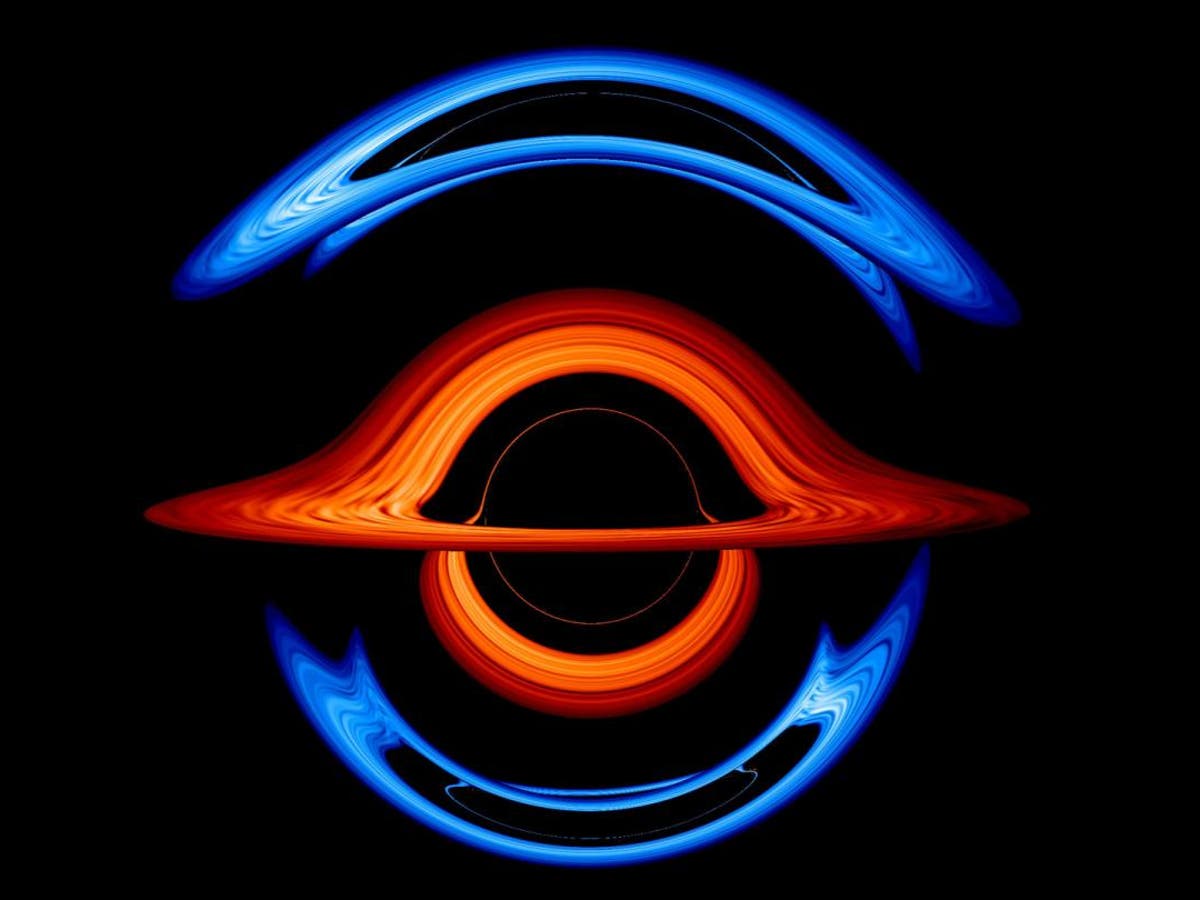 A pair of orbiting black holes with masses millions of times more than the Sun have been shown dancing around each other by Nasa.

The visualization traces how the two black holes distort and redirect light from the storm of hot gas – an accretion disk – that surround each one.

Each disk usually takes a “double-humped look”, as Nasa describes it, but as one moves in front of the other they become a rapidly changing sequence of arcs, as the light has to manage the huge spacetime forces around the black holes.

“We’re seeing two supermassive black holes, a larger one with 200 million solar masses and a smaller companion weighing half as much,” said Jeremy Schnittman, an astrophysicist at Nasa’s Goddard Space Flight Center in Greenbelt, Maryland, who created the visualization.

“These are the kinds of black hole binary systems where we think both members could maintain accretion disks lasting millions of years.”

The blue and red colours, chosen to make it easier to track the light sources, also reflect the reality of this enormous spatial event – with hot gas giving off a bluer light, and material around small black holes experiencing strong effects that producing hot temperatures.

If this visualisation was produced with real colours, they would be invisible. Most of the emissions are ultraviolet light, with the blue disk reaching a slightly hotter temperature.

One side of the disk will be brighter than the other, due to the gravitational distortion affecting the paths of light. This rapid motion modifies its luminosity through Doppler boosting – making the side visible to the viewer brighter and the side spinning away dimmer.

Another peculiar phenomenon visible in the video is “relativistic aberration”, where the black holes appear smaller as they are closer to the viewer and larger when they are further away.

While this might be counter-intuitive, the bizarre explanation is that both of the black holes create small images of each other that circle around each orbit. Light from the black holes is being redirected 90 degrees, meaning viewers can see the wholes from two perspectives – face on and edge on – simultaneously.

“A striking aspect of this new visualization is the self-similar nature of the images produced by gravitational lensing,” Schnittman explains. “Zooming into each black hole reveals multiple, increasingly distorted images of its partner.”

On a normal computer, the calculations needed to make these frames would take approximately a decade, but it only took two per cent of the Discover supercomputer at Nasa’s Centre for Climate Simulation’s processors to achieve this task. Even for that high-powered machine, though, it was a day before it was completed.

Astronomers hope that in the future they will be able to detect gravitational waves – ripples in space-time – from black holes like these as they spiral and merge.

0 0 0 0
Previous : Pregnant women to be offered Covid vaccines after research shows jabs are safe
Next : VICTIMS BILL OF RIGHTS | Finally, a way where victims are treated fairly & with dignity – Brian Rose