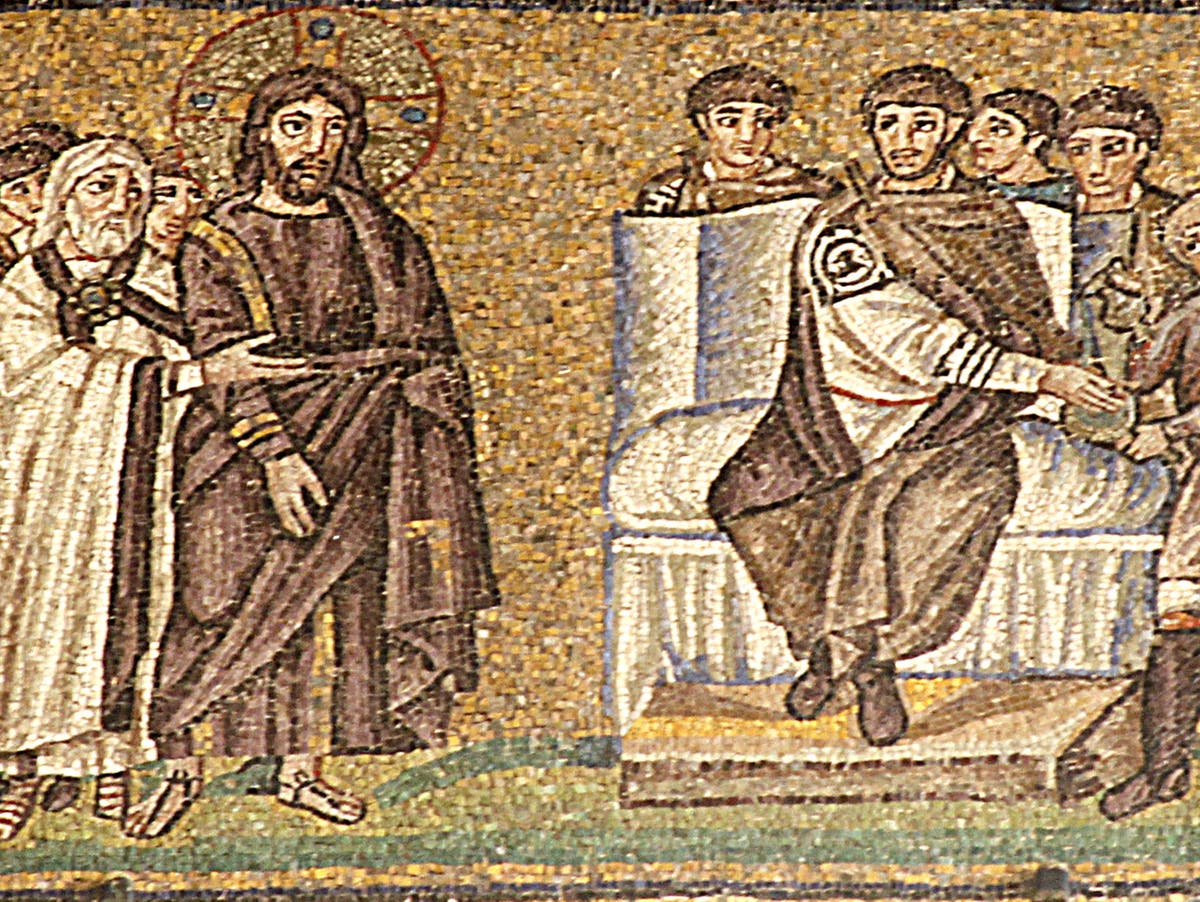 The ancient propaganda war that led to the triumph of Christianity

ew historical research is shedding fresh light on the birth of Christianity as a major religion.

Although Christianity had existed since the mid-first century AD, it didn’t become the Roman Empire‘s main religion until more than 250 years later.

An investigation by an American historian of early Christianity, David Lloyd Dusenbury of the Hebrew University of Jerusalem, is for the first time establishing the scale and nature of the propaganda battles that raged in the final decades of pagan control of the Empire.

The new research, published in a ground-breaking book this week, shows that a major issue used by both sides in the late third and the very early fourth century was the role of Pontius Pilate, the Roman Prefect of Judaea who had ordered Jesus crucifixion some 270 years earlier.

The battle seems to have centred around Pilate’s actions.

Both sides wanted Pilate, a traditional high-ranking Roman, to appear innocent of any wrongdoing – but in different ways.

The new research suggests that the pagans tried to vindicate Pontius Pilate by claiming that Jesus was a violent and dangerous rebel – and that therefore Pilate was quite right to have had him executed.

By contrast, many Christian propagandists sought to exonerate Pilate by claiming that the Jews had taken matters into their own hands – and that therefore it was the Jews, not Pilate, who were to blame for Jesus’ death.

Both sides – pagans and Christians – were keen to portray themselves as loyally pro-Roman – in order to try to win over traditional elites within the Empire.

Although the pagan/Christian ideological war was ultimately decided on the battlefield, both sides appear to have seen their respective propaganda campaigns as essential in increasing their chances of political and military victory.

At the time of the propaganda war and the final political and military contest between pro-pagan and pro-Christian forces, its estimated that only around 10% of the population of the Empire was Christian. Of the remaining 90 percent, most were pagan.

And yet, with the help of pro-Christian propaganda, Christianity succeeded in winning over sufficient high status and powerful individuals to enable it to triumph politically and militarily.

The new research highlights the key ‘spin doctors’ on both sides.

On the pagan side there were two key propagandists: one was the rabidly anti-Christian Roman ruler of Syria, Palestine and Cyprus – a Roman soldier called Maximinus Daza, who became co-Emperor between 310 and 313 AD. He was the promoter of the main pro-pagan book, entitled Memoirs of Pilate, which sought to justify Pontius Pilate’s decision to crucify Jesus. He claimed that the book was based on Pontius Pilate’s own (now long-lost) account of Jesus’ trial – an account which had apparently been sitting in an Imperial library for the preceding 270 years. Daza was an eastern European of peasant stock, who was accused by Christian propagandists of being a sex-mad, alcohol-obsessed, debauched serial adulterer. Apart from a very brief pagan comeback half a century later, he was the last pagan emperor of the Empire – and was also (as Roman ruler of Egypt) the last and roughly 210th person to have the title of pharaoh.

The other key pro-pagan propagandist was the Roman governor of Bithynia (northern Turkey), a Roman aristocrat and pagan philosopher by the name of Sossianus Hierocles who wrote an anti-Christian propaganda book called Lover of Truth, which seems to have accused Jesus of being the leader of a 900-strong gang of robbers! Although it’s extremely unlikely that Jesus was in any way involved with such outlaws, first and early-to-mid-second century Judea would have been perceived by many educated Romans as a hotbed of violent, and often messianically-inspired, rebels and politically motivated ‘robbers’. Indeed, in the century and a half following Jesus’ birth, there were at least a dozen partly religiously-motivated armed Jewish rebellions against Rome in at least five different parts of the Empire (including at least seven in Judea itself). The Empire’s Jewish population – especially the Jews of Jesus’ era – was without doubt one of its most rebellious, a reputation which anti-Christian propagandists appear to have exploited to the full.

On the Christian side there were also two key propagandists, the most aggressive of whom was a stridently anti-pagan imperial adviser named Firmianus Lactantius, who produced anti-Pagan and anti-Jewish propaganda material. In one book, The Deaths of the Persecutors, he describes in lurid detail how God inflicts particularly gruesome deaths on political leaders involved in anti-Christian campaigns. And, in another book, the Divine Institutes, he spread totally fake allegations that the Jews (not the Romans) had actually carried out Jesus’ crucifixion – and that Pontius Pilate had never sentenced Jesus to death. Lactantius was a key adviser of the first Christian emperor, Constantine – but he was also, to a large extent, a progenitor of Christian anti-Semitism.

Another key pro-Christian campaigner was a Christian theologian and historian called Eusebius who wrote a book known as the Martyrs of Palestine in order to discredit the pagan Roman rulers who controlled that region. The book was an expose of pagan brutality – and a work of praise for Christian heroes.

“Prior to carrying out this new research, we had never realised how large the figure of Pilate loomed in the huge propaganda war that preceded Christianity’s triumph over paganism,” said Dr Dusenbury, who has just published his revelatory new research in a book, entitled The Innocence of Pontius Pilate.

Although the least Christian part of the Empire was Europe, it was from there that the most powerful pro-Christian political leader, a ruthless senior Roman military officer called Constantine, emerged. Conversely, it was the empire’s Asian provinces which had the largest Christian populations – but also, perhaps as a consequence, some of the most virulent anti-Christian political leaders. It is conceivable that in the East, Christians were seen by some of their pagan fellow citizens as a threat, while in some parts of Europe, Christianity was not perceived so strongly in that way.

The judge at Jesus’ trial was the Prefect of Judaea, Pontius Pilate – but the key accusation against Jesus concerned Jesus’ alleged claim to be King of the Jews (albeit not in the conventional political sense).

Pontius Pilate had referred Jesus’ case to the ruler of Galilee, Herod Antipas – but Herod refused to convict and referred the case back to the Roman prefect. Pilate then finally tried Jesus and found him guilty.

Some historians have been puzzled over why Jesus’ alleged claim of royal status (even if only in a spiritual sense) would have been a Roman capital offence.

The answer may lie, by a bizarre coincidence, around the year of Jesus’ birth, in an event 1400 miles to the north-west.

For, around the year 1 BC, the Emperor Augustus had finally settled a Middle Eastern political dispute between different claimants to the Judean throne (i.e. to the title, ‘King of the Jews’) – by indefinitely suspending the use of that title. Indeed the title itself was, in legal terms, a Roman ‘possession’ having been specifically created some years earlier not in Jerusalem, but by the Senate in Rome.

Jesus’ alleged claim to be ‘King of the Jews’ may well therefore have been perceived as violating that Imperial legal decision to suspend that ‘Roman-originating’ title. Although Jesus himself never confirmed or denied that he claimed that title, the Romans and others perceived that he did.

The propaganda conflict which preceded the triumph of Christianity occurred between roughly 290 and 313 AD – and as that battle intensified, the struggle between pro-pagan and pro-Christian forces became a more physically violent one. First, between 303 and 313, a succession of pagan Roman emperors launched a brutal suppression of Christianity (mainly in the east of the Empire). But, in the final few years of that period, armies, led by pro and anti Christian emperors, began to clash. The two key battles were in 312 AD when the pro-Christian Roman politician, Constantine (who had been declared Emperor by the Roman legions in Britain six years earlier) defeated his pro-pagan rival near Rome – and in 313 AD when the arch-pagan ‘spin doctor’, the Emperor Maximinus Daza, was defeated by Christian-aligned forces near what is now Istanbul.