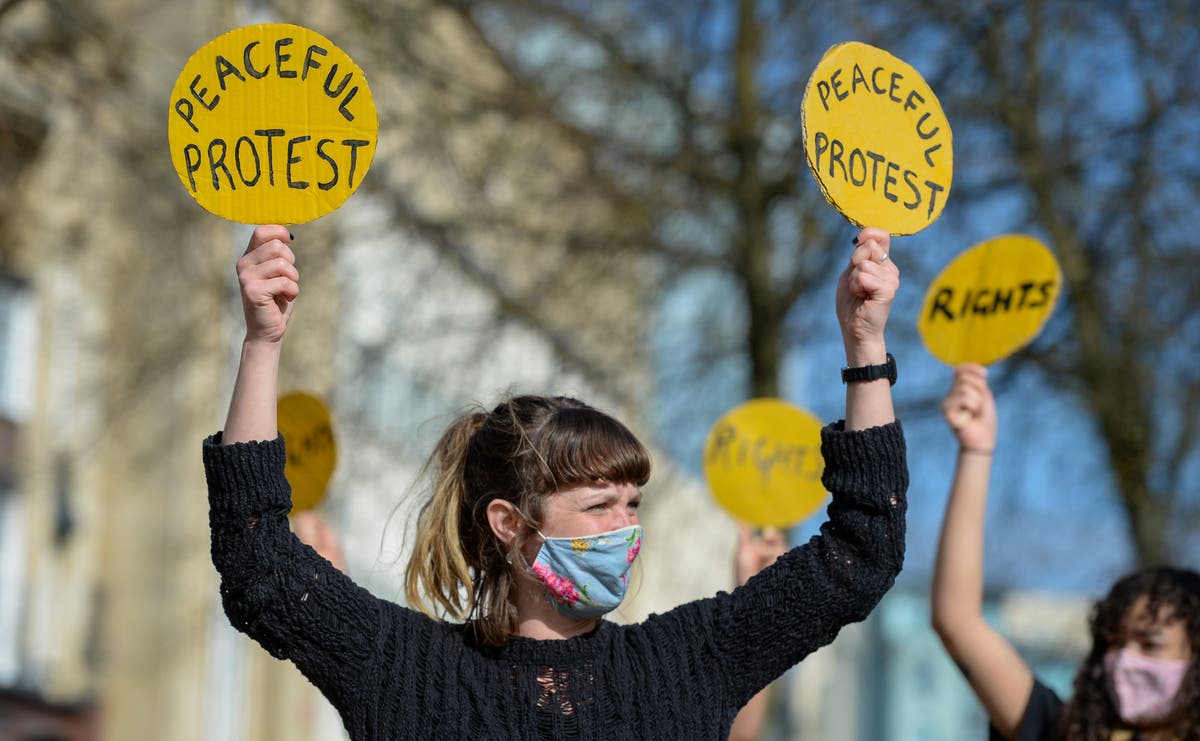 In recent weeks, thousands of demonstrators have gathered across the country in an attempt to fight a sweeping crime bill that would impose tighter restrictions on the right to protest.

Last week in Sheffield, protesters began their march at a steady pace, chanting and holding homemade signs above their heads, making their way through the city centre.

They finished their protest, gathering together on the cobblestones outside the town hall, with a sense of accomplishment. Yet when they eventually dispersed many wondered what would happen next.

A week later, Bristol Transformed organised a panel that invited organisation representatives to discuss exactly how they were going to continue fighting back.

Having managed to delay the passing of the bill in parliament, activists regrouped, making it clear that their work was far from done.

“We must be very clear in our message to people that this legislation is simply unacceptable,” says Howard Beckett, Unite Assistant General Secretary.

“We will not have a society where our rights to protest are taken away. We need to come together now to reject this legislation whether or not it is passed. At the end of the day, opposition to this bill is liberty itself.”

Some 107 people were arrested during a “Kill the Bill” protest in central London on Saturday. The arrests were made for reasons which included a breach of the peace, violent disorder, assault on police, and violations of Covid-19 legislation.

These arrests sparked immediate outrage, with many taking to social media to express their horror. Some went as far as to highlight the difference in approach adopted by the police towards people mourning for Prince Philips outside Buckingham Palace, compared to those present at the Sarah Everard Vigil.

“It makes no sense that Prince Philip’s mourners were met with so much more sympathy when they were also congregating outside the palace. Double standards at its finest,” says Claire Trent, who attended the vigil.

Ben Smoke, a journalist, was also at the vigil on Clapham Common on 13 March, which he describes as the day that “it all exploded.”

He explained:  “I saw young women screaming as they were being pinned to the ground,” adding, “that’s the reality of policing in our country.”

The Police, Crime, Sentencing and Court Bill is a 300-page piece of proposed legislation that aims to provide the police with more power, including imposing restrictions on protests.

Currently, the law states that the police must determine if a protest is likely to lead to serious public disorder or disruption before being given the power to step in.

However, if the new policing bill were to pass, police would be able to put more restrictions in place, including a start and finish time, noise limits and make it an offence to “intentionally or recklessly cause public nuisance.”

This would also apply to single-person protests, and the damaging of memorials, for which a 10-year prison sentence could be imposed.

“The might of Number 10 are out to get our rights, our minds and our bodies using force when force is not needed, and this must be reviewed,” said Cleo Lake, a Green Party councillor for Cotham, and former Lord Mayor of Bristol.

Sheffield’s Kill the Bill protest on Saturday was one of many locations where the protest remained peaceful with no arrests or disruption.

Michael Suter, chair of Sheffield Save our NHS, who attended the demonstration said it was “about fighting for democratic rights and the right to protest and showing it can be done peacefully our end.”

Chief inspector Paul Ferguson of South Yorkshire police said the local people had gathered to have their opinions heard. He said he had worked alongside police to ensure the demonstration was done in accordance with requirements for social distancing.

He explained: “Our neighbourhood officers will be present; their role will be to ensure that participants balance their rights to protest set against a continued need for us all to comply with the guidance in place to reduce the spread of Covid-19.

“We are confident that Sheffield groups will continue to make their beliefs heard, but work with us to ensure a safe protest for all.”

Moving forward, organisations and activists intend to keep the momentum going and ensure they are heard through every stage of the bill.

Housing union Acorn said they will continually mobilise members and supporters to oppose the Policing, Crime, Sentencing and Courts Bill.

In May, the community union will be taking action in 25 towns and cities across England and Wales in a bid to sway MPs, as well as launching a push for people to submit responses to the scrutiny committee.

“We’re currently laying out our plans to resist the Bill, but we will not shy away from standing up for our members and our communities if it is passed,” Acorn said.

While some people have been put off attending in-person marches after the arrests, activists are determined to keep them in the conversation by going on social media.

Ms Trent has been sharing posts about her experiences on her private social media to encourage her family and friends to keep the momentum going.

“Hopefully the protesters have invoked discomfort in everyone who was getting too comfortable watching injustices occur in the world,” she said.

“So many of the rights we enjoy today were fought for by protestors before us. If they’re going to stop us from protesting on the streets under the guise of restrictions, we will pull every other string possible to make sure we are heard.”

0 0 0 0
Previous : PS5: Sony announces ‘first major system update’ for PlayStation
Next : BIG ANNOUNCEMENT 🗣 THE RELEASE OF “OUR MANIFESTO FOR THE FUTURE” 📄 INNOVATIVE SOLUTIONS FOR LONDON