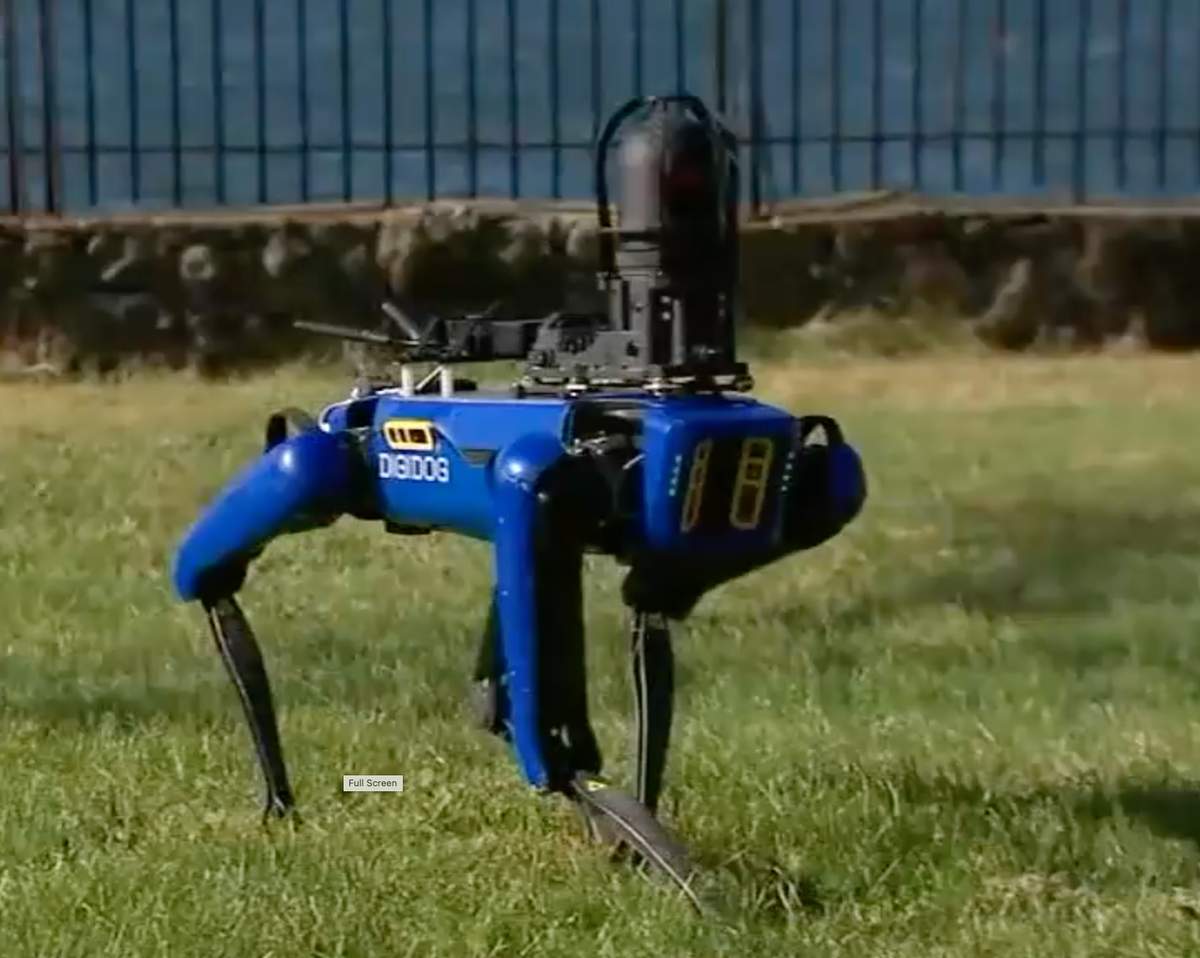 Internet freaks out over NYPD ‘black mirror’ robot dog, but should we be worried?

Straight out of an episode of Black Mirror, New York’s police department first revealed its robot dog unit “Digidog” back in December 2020, and a new video of it in action is again causing a stir.

Footage posted to Facebook on Monday shows NYPD officers leading a handcuffed suspect out of a building as a crowd of onlookers watch.

The officers are then followed by Digidog and its operators, the machine purposefully prowling past the crowd across the rain-slick paving.

“I’ve never seen nothing like this before in my life,” says the person filming the video.

Reaction online to the post ranged from confusion to “Get ready for terminators soon smfh” and “We really in our last days”.

On Twitter, some people posted diagrams showing how to disable Digidog by covering its sensors or removing its battery, others were outraged over the $75,000 cost given the poor funding of some other city services

Active duty testing of the remotely-operated robot dogs, manufactured by Boston Dynamics, appeared to catch many by surprise when footage first emerged of NYPD deploying the unit in February.

While many were familiar with video from the company demonstrating the prowess and capabilities of their product – running, jumping, dancing, climbing stairs, balancing, and being difficult to push over – the sight of a unit out in the real world rang alarm bells for some.

The chief concern is that technology may be outpacing any form of regulation, and this has combined with existing fears of an increasingly militarised police force in a climate of high tension between law enforcement and the public.

Add to that the price tag when the squeeze on civic finances has been exacerbated by the impact of the coronavirus pandemic, and the complaints and concerns begin to mount.

US representative for New York Alexandria Ocasio-Cortez, whose district includes the Bronx, where Digidog was first deployed, was not impressed by the use of city resources.

“Shout out to everyone who fought against community advocates who demanded these resources go to investments like school counseling instead,” she tweeted in February. “Now robotic surveillance ground drones are being deployed for testing on low-income communities of colour with under-resourced schools.”

She added: “Please ask yourself: when was the last time you saw next-generation, world-class technology for education, healthcare, housing, etc consistently prioritised for underserved communities like this?”

Police forces argue that the use of robots dates back decades, when bomb diffusing units were first introduced. In February, NYPD said: “The NYPD has been using robots since the 1970s to save lives in hostage situations & hazmat incidents. This model of robot is being tested to evaluate its capabilities against other models in use by our Emergency Service Unit and Bomb Squad.”

Digidog is deployed for testing by the force’s Technical Assistance Response Unit, essentially as a land-based drone for surveillance. It is argued that its reconnaissance capabilities will save lives and keep officers out of harm’s way.

There are a number of incidents in the past in which similar technology has fulfilled this promise by keeping officers and members of the public at a safe distance from each other.

Digidog’s reconnaissance remit has raised privacy concerns, and naturally the question of whether such a unit could be armed in the future in some capacity has been raised – some draw the comparison with the use of drones by the military which followed a similar trajectory in their use and development.

Boston Dynamics, which calls its product “Spot” and refers to it as a “premiere industrial quadruped robot”, notes that in its terms of service it is prohibited to weaponise the unit.

However, even if Digidog were never to be weaponised, its presence on the streets of New York City has grabbed the attention of the public.

Community leaders and local politicians are taking note concerned about what this means for the future of policing.

Few are comfortable with the advance of technology and surveillance strategies within a police force that appears at times equipped to fight a war.