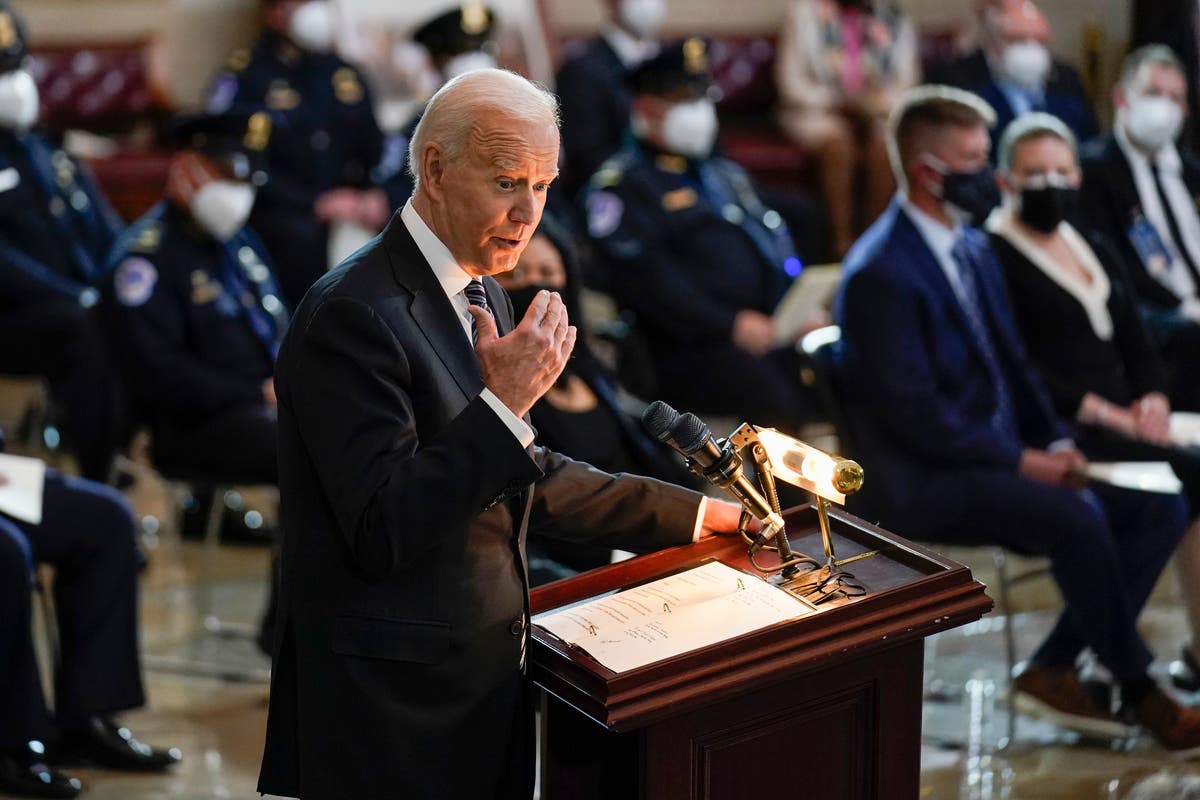 During a memorial service at the US Capitol Rotunda for Officer William Evans, President Joe Biden picked up a toy dropped by the officer’s daughter, as House Speaker Nancy Pelosi told his family that while “no words are adequate” to address their loss, “we hope it’s a comfort to you that so many now know about your dad and know he’s a hero”.

“That his name will always be on our lips, and his memory in our hearts,” she added. “And that the President of the United States is picking up one of your distractions.”

Officer Evans, an 18-year-veteran of the force, was killed outside the Capitol on 2 April after a driver struck two officers before slamming into a security barrier, then exited the car with a knife, according to police.

The other officer was injured and released from hospital.

The suspect, Noah Green, was killed at the scene.

In his remarks to the family during the memorial on Tuesday, attended by several members of Congress and Washington DC Mayor Muriel Bowser, the president invoked his lessons on grief and loss and the assurance that painful memories return to happier ones.

“My prayer for all of you is that a day will come where you have a memory where you smile before you have a tear in your eyes,” Mr Biden said. “It takes a while … But when it comes, you’ll know he’s still with you, he’s in your heart.”

The death of a loved one is “like losing a piece of your soul, but it’s buried deep, but it comes back,” he said.

Mr Biden, seated during Ms Pelosi’s remarks, at one point bent down to pick up a toy dropped by Ms Evans’s daughter and handed it back to her.

“Greater compliments does no one have than the president of the United States looking after your toys,” Ms Pelosi said, breaking from her remarks.

Mr Evans’s body lay in a casket draped in the American flag at the centre of the Rotunda, as his wife and two children look on.

“Today we are hollow with loss, but one day, Billy’s memory will feel like a blessing,” said Senate Majority Leader Chuck Schumer. “If through all of life’s tragedies, Bill could search every moment for that spark of joy, so can we.”

Mr Schumer told Mr Evans’s children that lawmakers are “indebted to your dad”.

Mr Evans, 41, is the second Capitol officer killed in the line of duty this year in 2021.

Mr Evans is the sixth person to lay in honour in the Rotunda, joining Mr Sicknick, Rosa Parks, the Rev Billy Graham and Capitol Police officers Jacob Chestnut and John Gibson, who were killed during an attack in 1998.