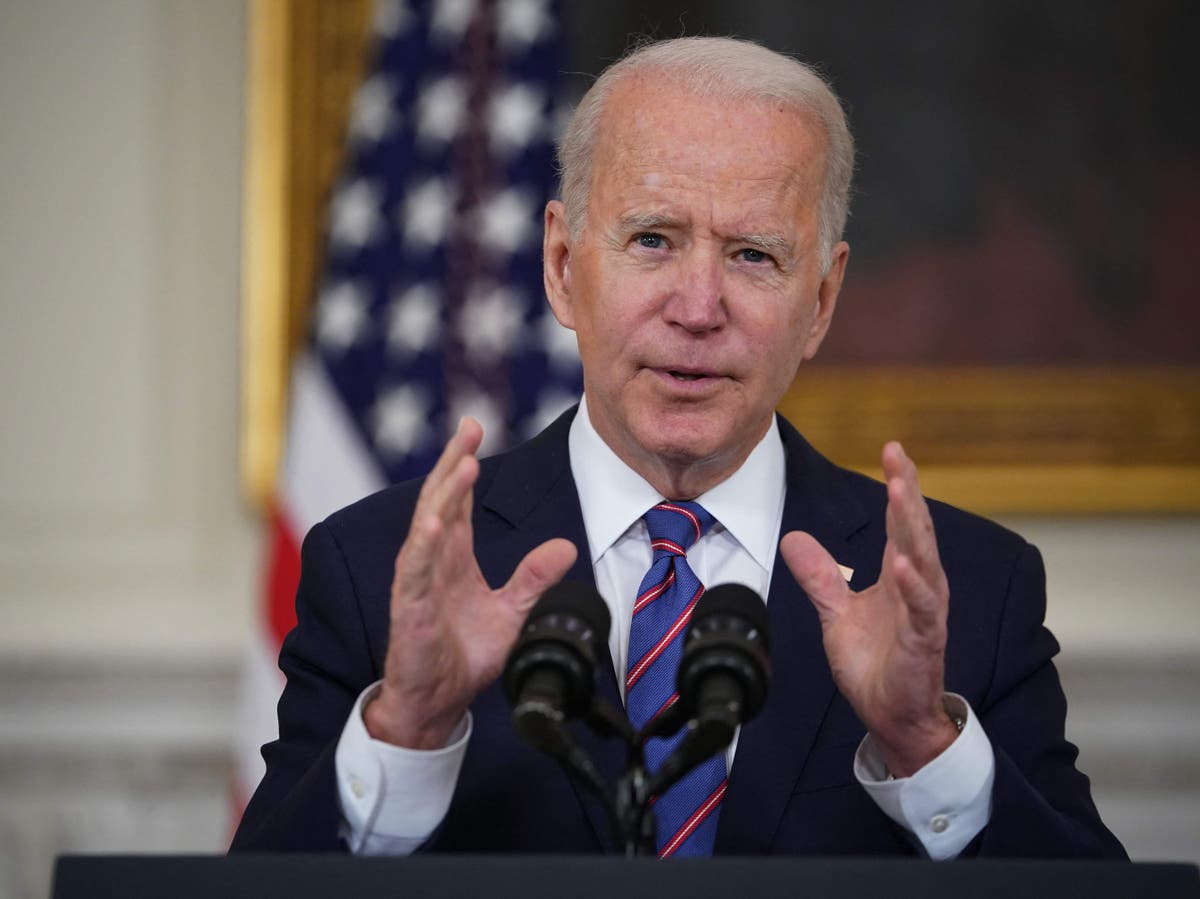 Joe Biden’s White House is amplifying its push for a $2.3trn infrastructure package with the release of state-by-state breakdowns that show the dire shape of roads, bridges, the power grid, and housing affordability.

The president is scheduled to meet with Republican and Democratic lawmakers on Monday afternoon and can use the state summaries to show that his plan would help meet the needs of their constituents.

Transportation Secretary Pete Buttigieg has defended the sweeping infrastructure plan, dismissing what he described as a “semantic debate” over components of the package which some Republican lawmakers have argued were not typically associated with infrastructure.

Mr Trump said that he was “disappointed” in his vice president and used a profanity in assessing Mr McConnell, also branding him a “stone-cold loser”, according to remarks obtained by the Associated Press.

Republican officials are trying to play down an internal feud over his role in the party, his commitment to GOP fundraising, and his plans for 2024.

Trump recycles attacks against Fauci calling him ‘full of crap’

Donald Trump has once again hit out at Dr Anthory Fauci, the country’s leading infectious disease specialist, while delivering an address in front of the Republican party’s biggest sponsors at Mar-a-Lago.

At the event on Saturday, Mr Trump recycled once of his frequent taunts against the doctor, mocking his first pitch last season at Nationals Park.

He then hit out at Dr Fauci for advising against masks at the beginning of the pandemic, before recommending “five” masks in recent months.

“Have you ever seen anybody that is so full of crap?,” Mr Trump said of the chief medical adviser, according to The Washington Post.

Mr Trump and Mr Fauci have often clashed during and following the Trump administration’s time in office, with the doctor having often diverged from the former president on issues of the pandemic.

Cindy McCain is set to be named as the US ambassador to the United Nations World Food Programme by president Joe Biden under his administration, Politico has reported.

Two sources with knowledge of the matter reportedly told the outlet that Ms McCain, the widow of late Arizona senator John McCain, is undergoing vetting to be nominated for the post.

The nomination would mark his administration’s first Republican appointee to a Senate-confirmed position in line with tradition observed by recent presidents of nominating at least one person from the opposing party.

Trump thinks the coronavirus vaccine should be called ‘Trumpcine’

Donald Trump has credited himself for the development of several coronavirus vaccines recounting how an individual told him the shots be called the “Trumpcine”.

Mr Trump told the crowd that an individual, who he called “sir”, came to him and said the vaccine should be called the “Trumpcine”, The Washington Post and CNN reported.

The former president cited Operation Warp Speed, the US government initiative to fast-track the development of Covid vaccines, as a factor.

Gaetz did not request meeting with Trump, both sides insist

Matt Gaetz and a spokesman for Donald Trump have insisted that the Florida representative was not recently denied a meeting with Mr Trump in Mar-a-Lago as was reported on Sunday by CNN.

Mr Trump’s spokesman, Jason Miller, tweeted: “This story is complete fake news. No such scheduling or meeting request was ever made, and therefore, it could never have been declined.

“Take note that this story has zero on-the-record sources. It’s literally made-up. We are demanding a full retraction.”

Mr Gaetz called the CNN report “a total lie” saying he was “on a pre-planned vacation” with his fiancée. “I was welcomed at Trump Doral days ago. No such meeting was denied nor sought,” he said.

President Joe Biden is facing a backlog of nearly 2.6 million visa applications despite his decision to reverse many of Donald Trump’s anti-immigration policies, according to CNN.

According to the broadcaster, backlogs in some immigrant-visa categories are 50 or even 100 times higher than they were four years ago when the Trump administration began.

Nearly half a million applicants who are “documentarily qualified” and ready for interviews remain in limbo, according to a recent legal filing by the State Department.

Some of the delays also come amid restrictions imposed in response to the Covid-19 pandemic, but Mr Biden is also yet to roll back measures that slow or block processing from the previous administration.

More than 100 US business leaders got together on a Zoom call to discuss their response to the controversial new voting restrictions first passed by Georgia and now set to be enacted in several states across the country.

Leaders including from companies like Delta, American, United, Starbucks, Target, LinkedIn, Levi Strauss, and Boston Consulting Group were present on the call on Saturday, according to the Washington Post, which first reported the call.

“Major, the Bidens’ younger dog, will undergo some additional training to help him adjust to life in the White House,” Jill Biden’s press secretary Michael LaRosa told the broadcaster.

“The off-site, private training will take place in the Washington, DC area, and it is expected to last a few weeks.”

The German shepherd recently made headlines following two biting incidents involving the canine. The Biden family adopted Major in 2018, and they also own Champ a 12-year-old German shepherd.

In an interview with USA Today, Mr Boehner said: “What struck me, especially after the election, was, here’s all these people loyal to Donald Trump, and he abused them.”

The former speaker added: “He stepped all over their loyalty to him by continuing to say things that just weren’t true.”

The Ohio Republican, who served as Speaker of the House between 2011 and 2015, is scheduled to release his book titled: On the House: A Washington Memoir, in the coming days.

0 0 0 0
Previous : Actor’s family awarded $29m in damages after allergic reaction to pretzel left her quadriplegic
Next : Wolves switched from eating horses to caribou and moose to survive ice age extinction