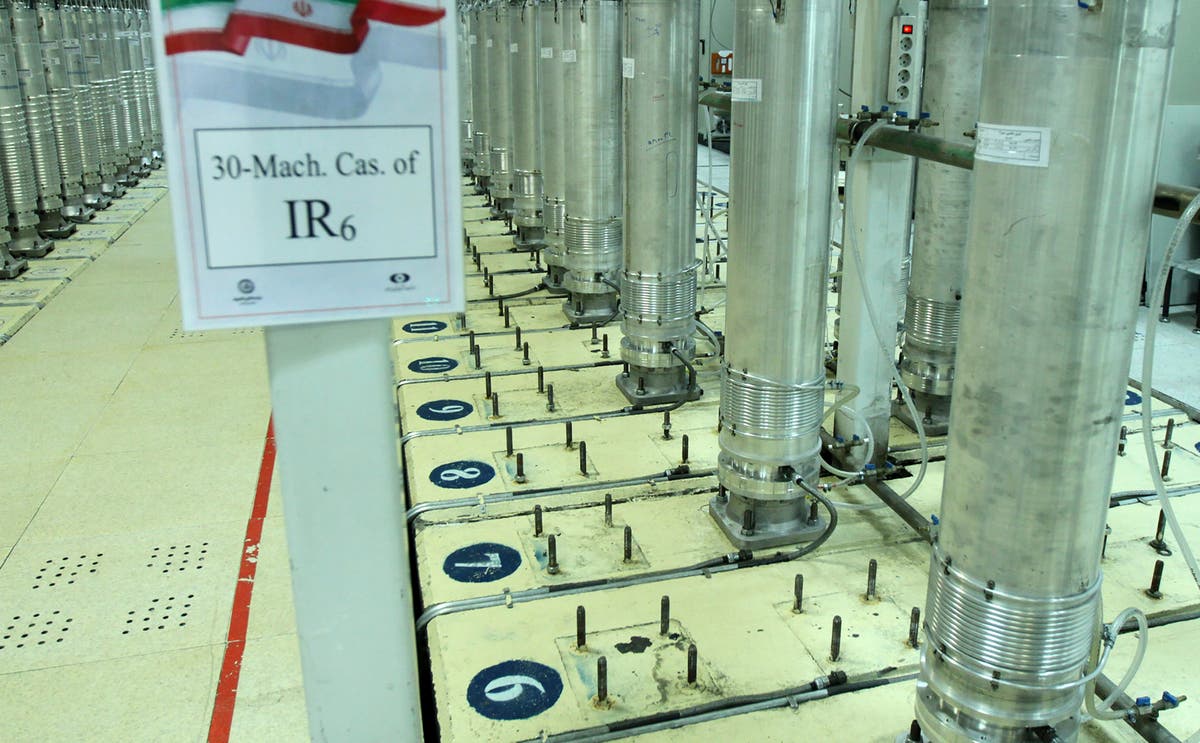 IRAN-NUCLEAR — The head of Iran’s civilian nuclear program has called a blackout that struck the country’s Natanz nuclear facility “nuclear terrorism.” Ali Akbar Salehi made the comments in a report published online by Iranian state television on Sunday night. He did not name a suspect in the sabotage. His comments escalate current Mideast tensions. Many Israeli media outlets offered the same assessment that a cyberattack darkened Natanz and damaged a facility that is home to sensitive centrifuges. By Jon Gambrell SENT: 1,040 words, photos. WITH: IRAN-NUCLEAR EXPLAINER — Iran’s nuclear program has been targeted by diplomatic efforts and sabotage attacks over the last decade, with the latest incident striking its underground Natanz facility. The attack Sunday at Natanz comes as world powers try to negotiate a return by Iran and the U.S. to Tehran’s atomic accord. The sabotage threatens to upend those negotiations and further heighten regional tensions across the Mideast. SENT:980 words, photo.

GEORGE FLOYD-OFFICER TRIAL — The trial of a former Minneapolis police officer charged in George Floyd’s death enters its third week Monday. Derek Chauvin is charged with murder and manslaughter in Floyd’s May 25 death. Prosecutors say Chauvin pinned Floyd to the pavement outside a corner market for 9 minutes, 29 seconds. The state is near the end of a case that kicked off with searing witness accounts of Floyd’s arrest, followed by police supervisors and training officers testifying that Chauvin wasn’t following proper procedure by using the neck restraint on Floyd. By Amy Forliti, Steve Karnowski and Tammy Webber. SENT: 690 words, photos.

VIRUS-OUTBREAK — April is shaping up to be Brazil’s darkest month yet in the pandemic, with hospitals struggling with a crush of patients, deaths on track for record highs and few signs of a reprieve from a troubled vaccination program in Latin America’s largest nation. By Diane Jeantet and David Biller. SENT: 1,150 words, photos.

VIRUS OUTBREAK-RAMADAN — Muslims are observing their second Ramadan in the shadow of the coronavirus pandemic. The holy month, when the devout fast from dawn to dusk, comes as much of the world is being hit by an intense new coronavirus wave. By Mariam Fam, Kathy Gannon and Bassem Mroue. SENT: 1,270 words, photos. WITH: DUBAI RAMADAN — Dubai is parting this Ramadan with a longstanding requirement that restaurants must be covered by curtains during sunlight hours. SENT: 280 words, photos.

VIRUS OUTBREAK-COLLEGE VACCINES — U.S. colleges hoping for a return to normalcy next fall are weighing how far they should go in urging students to get the COVID-19 vaccine, including whether they should — or legally can — require it. By Colin Binkley. SENT: 1,080 words, photos. This is the Tuesday Spotlight

BIDEN-INFRASTRUCTURE — The Biden White House is amplifying the push for its $2.3 trillion infrastructure package with state-by-state breakdowns that show the dire shape of roads, bridges, the power grid and housing affordability. By Josh Boak. UPCOMING: 5 a.m. EDT, 560 words, photos. The state-by-state reports will be available via White House link. Biden’s meeting with lawmakers scheduled for 1:45 p.m. EDT.

NE0 NAZI-SENTENCING — Federal prosecutors in Virginia are seeking a five-year prison sentence for a former neo-Nazi group leader who pleaded guilty to conspiring with other far-right extremists to threaten dozens of targets. SENT: 640 words, photos.

ST. VINCENT-VOLCANO — More people have fled their homes on the eastern Caribbean island of St. Vincent as La Soufrière volcano rumbles loudly for a third day and the heavy weight of its ashfall is damaging some buildings. SENT: 430 words, photos.

CALIFORNIA-DEAD CHILDREN — Court documents show the woman arrested on suspicion of killing her three young children at her Los Angeles apartment had been involved in a custody dispute with their father. SENT: 330 words, photos.

REPORT-VOTING RIGHTS — A number of top executives and corporate leaders gathered online this weekend to discuss what to do in response to changes to some state voting laws, according to multiple news reports. SENT: 370 words, photo.

VIRUS OUTBREAK-CHINA-VACCINES — In a rare admission of the weakness of Chinese coronavirus vaccines, the country’s top disease control official says their effectiveness is low and the government is considering mixing them to get a boost. SENT: 610 words, photo.

VIRUS OUTBREAK-JAPAN — Tokyo adopted tougher measures against the coronavirus as it struggles to curb the rapid spread of a more contagious variant ahead of the Olympics in a country where less than 1% of people have been vaccinated. SENT: 550 words, photos.

BIDEN REPUBLICANS — Some longtime Republican voters are validating Joe Biden’s early approach to the presidency even as elected GOP leaders oppose him. But whether there are enough “Biden Republicans” remains a question. By Will Weissert. SENT: 940 words, photos.

SUPREME COURT-FORFEITURE — A Kentucky man whose pickup truck was confiscated by federal border agents in Texas and held for two years wants the Supreme Court to require a prompt court hearing as a matter of constitutional fairness whenever federal officials take someone’s property under civil forfeiture law. By Mark Sherman. SENT: 710 words, photos.

GERMANY ELECTION — The new leader of Chancellor Angela Merkel’s party says he’s confident of securing his party’s support to become the center-right candidate for Germany’s next leader, after he and a rival declared their ambitions. SENT: 490 words, photos.

ELECTIONS-ECUADOR-PERU — Voters in Ecuador appear to have turned to a conservative businessman in their presidential runoff election, rebuffing a leftist movement that has held the presidency for over a decade while ushering in an economic boom and then a yearslong recession. SENT: 1,090 words, photos.

ARMY OFFICER-TRAFFIC STOP-LAWSUIT — A Virginia town has announced that one of two police officers accused of pepper-spraying and pointing their guns at a Black Army officer during a traffic stop has since been fired. The announcement from the town of Windsor on Sunday night came hours after the governor called for an independent investigation into the December 2020 encounter. SENT: 430 words, photos.

POLICE SHOOTING-MINNESOTA — The family of a 20-year-old Minnesota man told a crowd that he was shot by police Sunday before getting back into his car and driving away, then crashing the vehicle several blocks away. The family of Daunte Wright said he was later pronounced dead. SENT: 550 words, photos.

BRAIN TUMORS-VIRUS TREATMENT — Scientists are reporting progress against a deadly type of childhood cancer with an unusual treatment. It involves putting viruses directly into the brain to spur an immune system attack. SENT: 670 words, photos.

POWELL — The chairman of the Federal Reserve says the U.S. economy is poised for an extended period of strong growth and hiring even though the coronavirus still poses some risk. Chair Jerome Powell also tells CBS’ “60 Minutes” that he doesn’t expect this year to raise the Fed’s benchmark interest rate, currently pegged at nearly zero. SENT: 810 words, photo.

GLF–MASTERS — Hideki Matsuyama is the first Japanese player in a green jacket. The 29-year-old won the Masters despite a few nervous moments. He led by as many as six on the back nine. He was only two ahead going to the 16th hole. And then Xander Schauffele made it easy for him by hitting into the water and the gallery and making a triple bogey on the 16th hole. Matsuyama takes his place among the elite in golf. By AP Golf Writer Doug Ferguson. SENT: 1,200 words, photos. With GLF–MASTERS-RUNNER-UP, GLF–MASTERS-THE LATEST, GLF–MASTERS-NOTBOOK, GLF–MASTERS-GLANCE, MASTERS-JAPAN CELEBRATES (sent)

HOW TO REACH US

0 0 0 0
Previous : “Dear God, Please help me to hate White people.” – David Icke
Next : Pentagon scientists reveal a microchip that senses COVID-19 in your body BEFORE you show symptoms and a filter that extracts the virus from blood