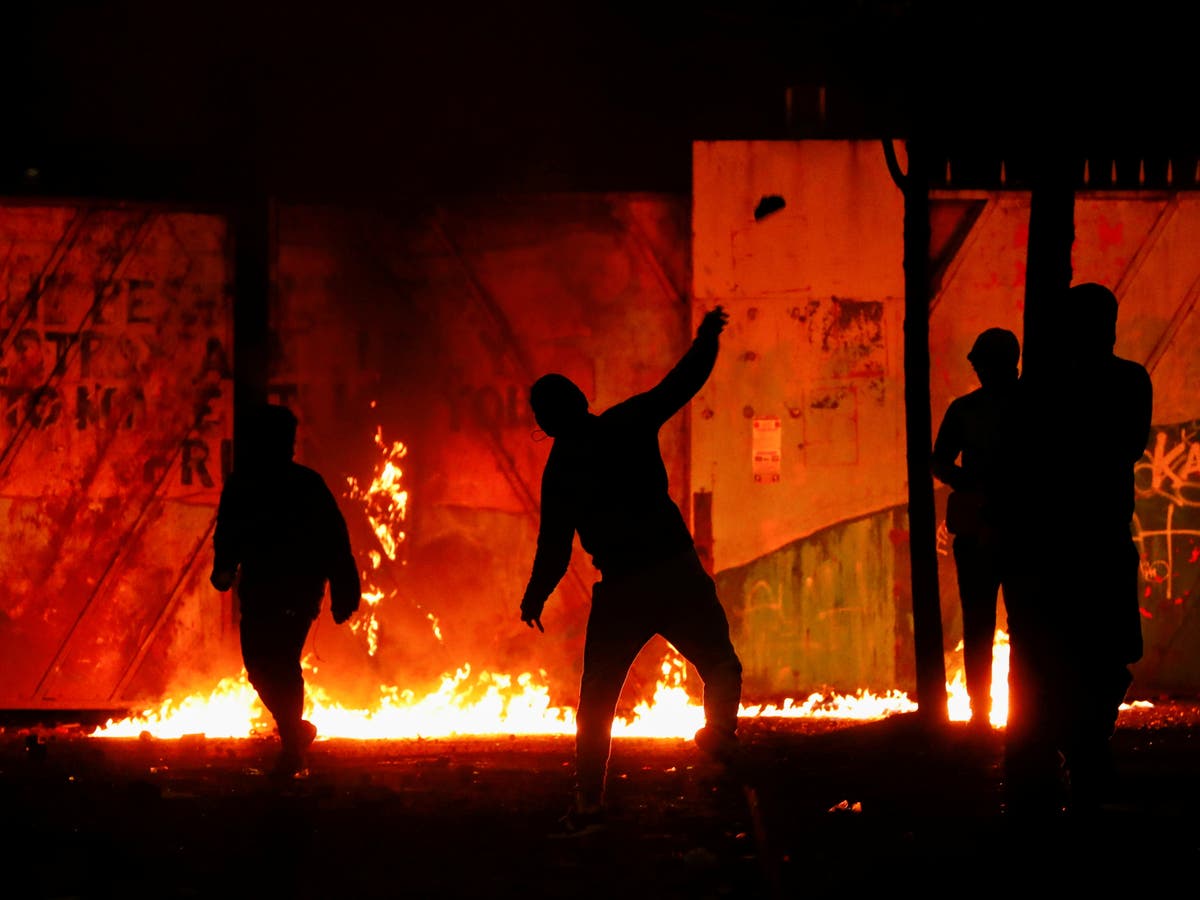 Northern Ireland timeline: How did anger build over the NI Protocol?

Northern Ireland has suffered a disturbing eruption of violence in the week following Good Friday, with heated clashes breaking out in Belfast, Londonderry, Newtownabbey, Carrickfergus and Ballymena in scenes many hoped had been left behind in the 20th century.

Brexit’s Northern Ireland Protocol appears to be at the heart of the conflict as loyalists express their anger at trading arrangements that have created economic barriers between the country and the rest of the UK across the Irish Sea.

Northern Ireland remaining in the EU’s single market post-Brexit means that customs checks are now required on freight entering the territory from elsewhere in Britain, leading to delays and frustration at the ports.

But it took an event unrelated to the trade furore to reignite simmering resentments: the announcement by prosecutors last week that no action would be taken against 24 Sinn Fein politicians, including deputy first minister Michelle O’Neill, for attending the funeral of senior IRA leader Bobby Storey on 30 June 2020 and flouting Covid restrictions as 2,000 mourners took to the streets of Belfast to pay their respects.

Here’s a timeline of the year’s events leading up to the clashes, which, for many, have triggered traumatic memories of the paramilitary terror of the Troubles.

Brexit is ratified, as Britain’s formal withdrawal from the European Union finally takes place with a trade border implemented in the Irish Sea under the deal’s Northern Ireland Protocol.

Bryson argues that a move by the DUP to frustrate the Stormont executive would be the party’s “most powerful weapon” in opposing the Northern Ireland Protocol.

Loyalist anger against the new arrangements’ teething troubles at the border leads to graffiti threatening Irish tanaiste Leo Varadkar appearing on the wall of a Spar grocery store in Belfast’s Drumart Square.

The Police Service of Northern Ireland (PSNI) says it is investigating the message as a hate crime, the wall is swiftly repainted and the gesture denounced by politicians across the political divide.

DUP leader Arlene Foster says the UK is hurting itself to appease the EU over its new customs arrangements.

Foster claims parcels are not getting through and retailers like John Lewis are not delivering despite extensions to earlier, smoother regulations remaining in place in some areas until October.

“There is damage happening to the Belfast Agreement and its successor agreement,” she says. “It has also damaged the UK internal market by putting in place a system to protect the EU single market.”

Further graffiti threatening Varadkar and giving his address is daubed on a wall at the junction of Newtownards Road and Belvoir Street in the east of the Northern Irish capital. The mural also features a loyalist sign depicting two gunmen and the words: “The prevention of the erosion of our identity is now our priority. East Belfast Battalion.”

Robinson writes in an editorial for NewsLetter that leaders must recognise “the odour of betrayal in the air” and comments ominously: “We all know where that leads.”

“There are forces using the exigencies of Brexit to advance a programme of constitutional change through stealth and propaganda,” he says.

“My advice to those who are driving this agenda forward is as short as it is restrained. Take care.”

The Public Prosecution Service announces it will not prosecute the 24 Sinn Fein politicians who attended Storey’s funeral last summer, breaching pandemic social restrictions then in place in order to take part, leading to accusations of “two-tier policing”, with one set of rules in place for loyalists and exceptions made for republicans.

Stephen Herron, the director of public prosecutions, says in a nine-page explanation for the decision that the lack of clarity and coherence within the regulations and prior engagement between organisers and police would “pose an insurmountable difficulty if any of the reported individuals were prosecuted”.

The attendance of Sinn Fein leaders at the funeral and a subsequent memorial event at Milltown Cemetery had sparked a major political row at Stormont, with the party accused of disregarding the same rules they set for the rest of society.

On 9 September, Michelle O’Neill had expressed her regret at undermining the public health message but did not apologise for attending.

PSNI chief constable Simon Byrne told the BBC on 9 December there would have been widespread violence then if his officers had attempted to break up the procession and insisted: “We are in nobody’s pocket.”

The unrest commences on Good Friday, a symbolic day for the fragile peace process.

Stones, fireworks, flares, manhole covers and petrol bombs are thrown at police in Belfast as Foster calls for calm.

Foster urges young people “not to get drawn into disorder”, adding: “I know that many of our young people are hugely frustrated by the events of this last week but causing injury to police officers will not make things better.”

Three cars are hijacked and set alight in Newtownabbey on the northern outskirts of Belfast, with the burning shells of vehicles pictured blocking the road at the Cloughfern roundabout as crowds gather.

Police are forced to close off surrounding roads before moving in on the roundabout, where footage publicised by the Police Federation for Northern Ireland shows masked men running over to throw petrol bombs and other projectiles at an armoured police van from close range before punching and kicking the vehicle.

Police again come under attack as violence flares up again on Easter Sunday.

Petrol bombs and bricks are thrown at officers in loyalist areas in Newtownabbey and Carrickfergus, with trouble again breaking out at the Cloughfern roundabout in Newtownabbey.

A car is burnt out and used to block a road in the Sperrin Park area of Derry while riot police are again attacked with projectiles in Carrickfergus.

Throughout Monday afternoon, masked loyalist bands march through the streets in towns across the country, including Portadown, Ballymena and Markethill.

The violence continues for a fifth successive night.

Violent clashes between police and loyalists continue in Northern Ireland

At least seven officers were injured in the sixth night of unrest, during which a bus is hijacked and set on fire in Belfast.

Press photographer Kevin Scott from The Belfast Telegraph is assaulted and clashes erupt between loyalists and nationalists at a peace-line street linking Shankill Road with Springfield Road in west Belfast.

50 officers in total have now been hurt in the unrest as UK prime minister Boris Johnson says he is “deeply concerned” about what is unfolding.

“This needs to stop,” says Coveney in a fresh appeal for peace.

“This is a time of real tension in Northern Ireland, unfortunately, that political leaders and community leaders need to respond to, like they have done in the past, to defuse tensions and come together rather than have a go at each other,” he tells RTE Morning Ireland.

“This needs to stop before someone is killed or very seriously injured. A lot of people have responsibilities to try to work to defuse tensions and that needs to start at the top, at a political level.

The Northern Ireland Executive meets for a briefing on the situation, before the Stormont Assembly is recalled to discuss the violence.