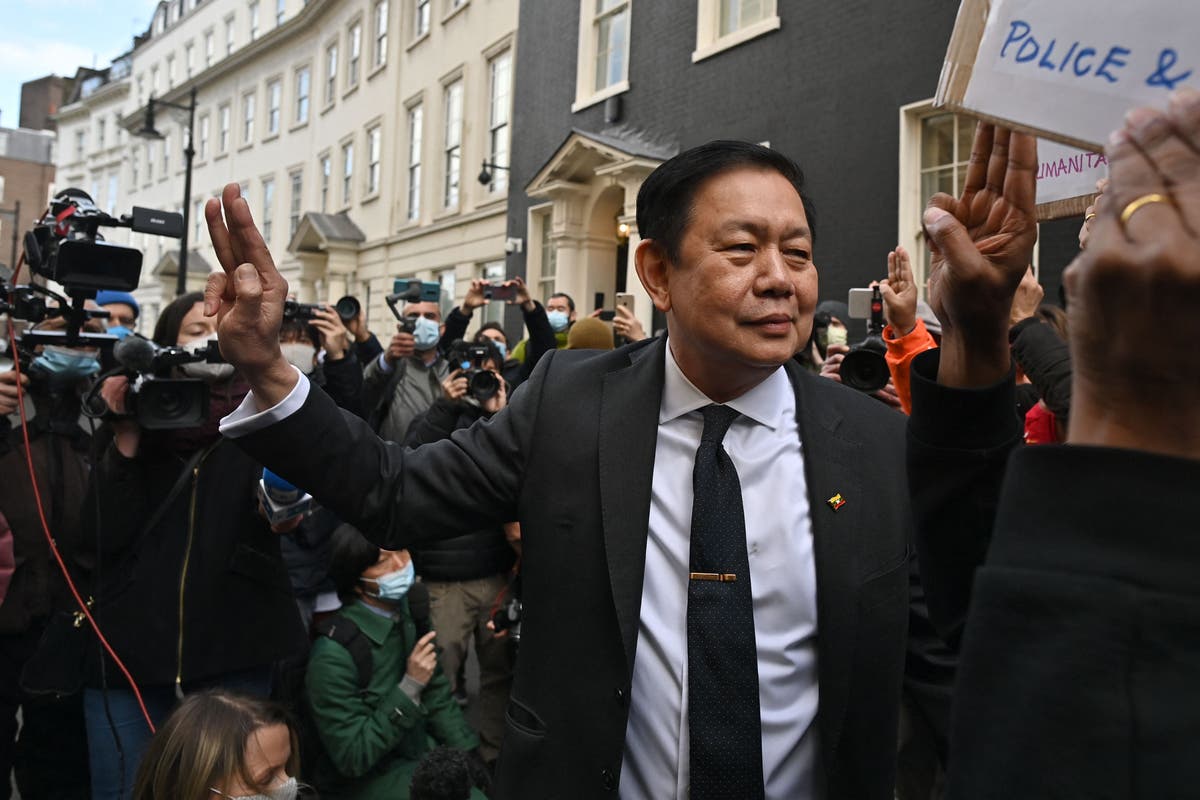 Following a night spent in his car after being locked out of his embassy in London, Myanmar’s ambassador has urged the British government to live up to its declarations on upholding universal democratic values and stand by him.

Ambassador Kyaw Zwar Minn requested the Foreign Office to act against the “coup in central London” just as it had condemned the one in Myanmar.

He asked that his deputy, who has taken over the building, should not be recognised as his replacement and expelled instead along with other supporters of the military junta which seized power.

The request from the ambassador poses an awkward problem for Britain.

Foreign Secretary Dominic Raab, on a visit to countries in the Far East, tweeted: “We condemn the bullying actions of the Myanmar military regime in London yesterday, and I pay tribute to Kyaw Zwar Minn for his courage.

“The UK continues to call for an end to the coup and the appalling violence, and a swift restoration of democracy.”

This was followed by widespread praise in social media by opponents of the military regime who interpreted the message as the UK rebuffing the attempt to remove the ambassador.

One, typical tweet said: “Thank you for your support and we expect you to support till the end of this matter. Thanks again.”

Another stated: “Democracy in Myanmar will be forever grateful to its friends ”

But the British government, under diplomatic protocol, cannot, in theory pick and choose who other states appoint as their envoy.

The Foreign Office has received a letter from the embassy saying that ambassador Kyaw Zwar Minn was removed from his post on 9 March and deputy ambassador Chit Win has taken over as charge d’affaires.

The junta fired the country’s ambassador to the UN, Kyaw Moe Tun, following the coup in February after he urged the General Assembly to use “any means necessary” to ensure that  Aung San Suu Kyi remains the rightful leader in the eyes of the international community.

On that occasion, Kyaw Moe Tun  remained as ambassador after his deputy, Tin Maung Naing, who the regime wanted to replace him, resigned instead and the UN special envoy on Myanmar, Christine Schraner Burgener, called on countries not to  recognise or legitimise the junta.

In London a spokesman for ambassador Kyaw Zwar Minn said: “The ambassador has been recalled by the Myanmar military regime – since then he has stopped following instructions from the Myanmar foreign ministry.

“There has been a coup in Myanmar in February and now the same situation in central London. This is unacceptable and disrespectful not only to the people of Myanmar but it is also clearly disrespectful to all of democratic society in the UK.”

0 0 0 0
Previous : Man, 26, admits attempted murder of police officer in ‘sickening’ meat cleaver assault
Next : Britain will achieve ‘herd immunity’ from Covid on Monday, according to UCL