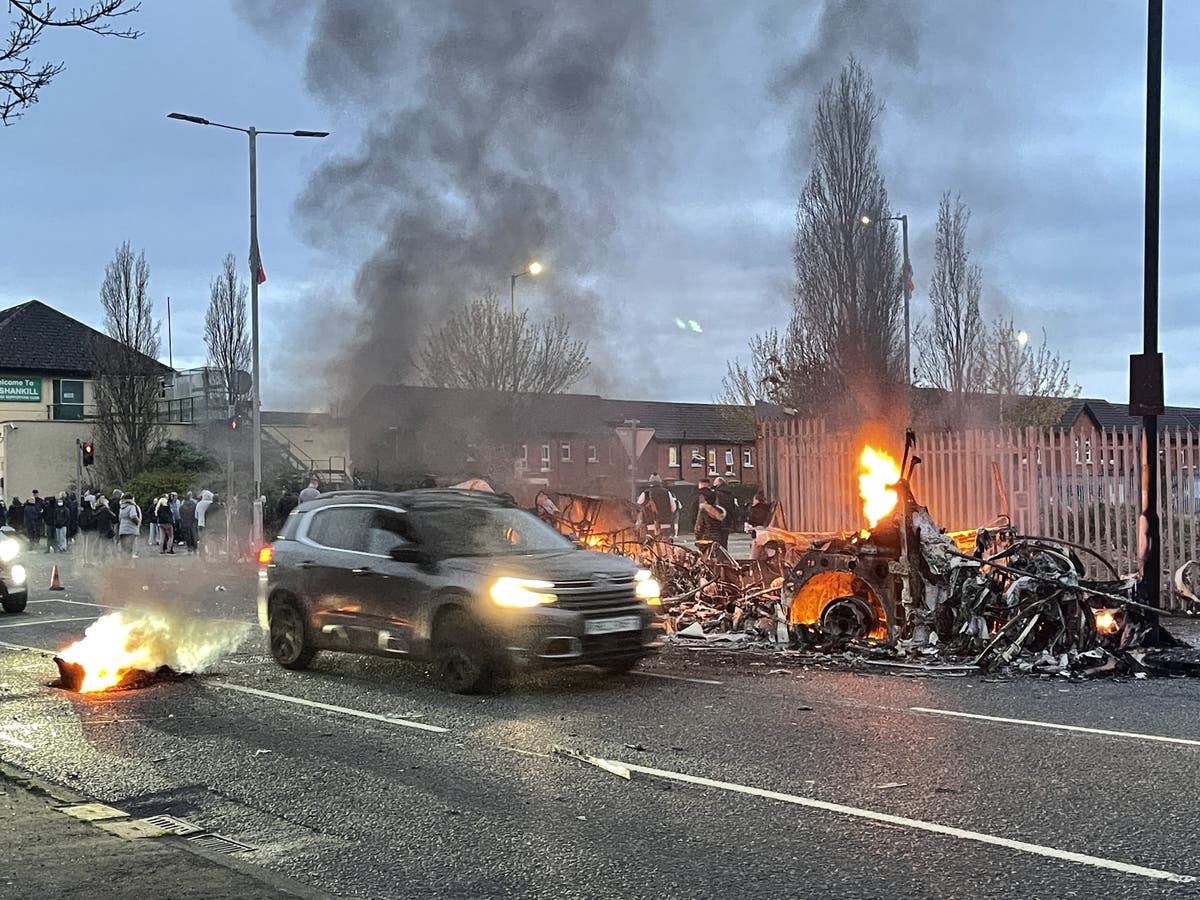 A bus has been hijacked and set on fire in Belfast, police have said.

Stones were thrown at officers and a press photographer was assaulted while working on Wednesday evening, as crowds gathered and violence flared in the Northern Ireland capital for the sixth consecutive night.

Attackers torched the bus at the junction of Lanark Way and Shankhill Road in west Belfast, said the Police Service of Northern Ireland (PSNI).

First minister Arlene Foster condemned the attack on Twitter, saying: “There is no justification for violence. It is wrong and should stop.”

SDLP MP Claire Hanna also criticised the scenes, saying: “We’re told by the apologists that these protests & riots are borne of frustration about not being listened to, but an excellent photo journalist is attacked while trying to capture the story.”

The photographer assaulted was Kevin Scott from the Belfast Telegraph, whose camera is badly damaged as a result. He said on Twitter that he was “jumped from behind” by two men, but has since gone back out to capture the scenes unfolding.

Police are advising members of the public to avoid the area. “We would appeal to those with influence in the area to use it to help restore calm,” a PSNI statement said.

The force added it had closed the interface gates after they were set ablaze, along with tyres and bins at Lanark Way.

PSNI told local newspaper Belfast Live that officers are in place and will “monitor the situation”.

One woman who lives in the area, Stacey Graham, tweeted that she was “on the ground tonight”, and encouraged parents to take their children away from Lanark Way.

“I can’t emphasise enough please do not fall into the trap. We need peaceful demonstrations,” she wrote, before adding: “Parents please know where your kids are. My heart is sore for my community. THIS IS NOT THE WAY.”

Videos circulating on social media show a bus being pelted with petrol bombs and having its windows smashed where a crowd of people had gathered.

Translink Metro subsequently said it had withdrawn all services into the area until further notice due to road closures, as well as services in east Belfast.

The Stormont Assembly is scheduled to be recalled on Thursday morning for an emergency debate following several consecutive nights of riots and attacks on police, thought to be the result of growing unrest caused by frustrations over a decision not to prosecute members of Sinn Fein over alleged coronavirus regulation breaches at the funeral of republican Bobby Storey.

Opposition to the post-Brexit Northern Ireland protocol, and drugs seizures against a dissident faction of the UDA, in southeast Antrim, have also been blamed.

The violence has mostly cropped up in loyalist areas, with some of the worst scenes on Monday being seen in Ballymena when nine riot police officers were injured after they intervened in an unlawful march of loyalists through the town.

During the unrest, debris, including a wheelie bin, was thrown onto the M2 motorway, forcing its closure.

Disorder also broke out in parts of Carrickfergus, Newtownabbey and Londonderry on Monday, with petrol bombs and other missiles thrown at officers.

Children as young as 12 have been involved in some of the violence that has been witnessed in recent days.

Earlier on Wednesday, DUP MP Gregory Campbell urged loyalist protesters to “use their heads”’ and step away from situations which may descend into disorder.

“If people use their heads and they think ahead and say ‘we’re not going to give people the opportunity to say a chief constable can’t stand down because of the threat of violence’,” Mr Campbell told the BBC. “That is something that would have a resonance across the community. Don’t give them that excuse.”

He added: “They should think long and hard before taking part in any protests that could eventually result in violence and serious hurt being done to individuals as well as to the wider community they live in.”

The riots have so far seen 41 police officers injured and 10 protestors arrested as a result. The DUP is calling for the resignation of police chief Simon Byrne over the lack of prosecutions.

0 0 0 0
Previous : Deliveroo should focus on improving conditions for its riders rather than snarling at its critics
Next : “Former Banker & London Real Party Candidate Brian Rose Surpasses Conservative Candidate For Mayor”