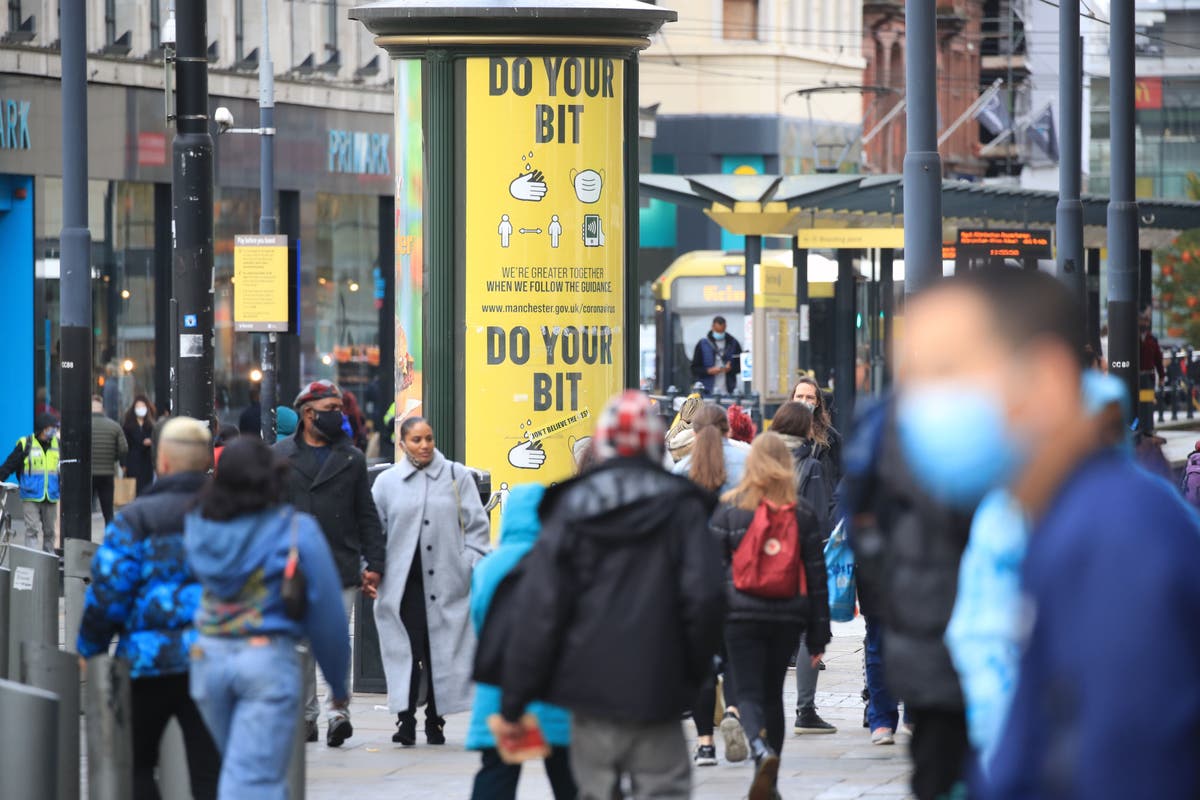 A north–south divide in coronavirus cases is emerging in England as the country begins to exit lockdown, with experts warning the north is at risk of “being left behind” and could face a tougher lockdown if cases get out of hand.

Data for the rolling seven-day rate of coronavirus cases across England shows increasing infections in many northern cities and regions compared with a downward trend in the south. There are fears the areas could become the “epicentres” for new surges or variants of the virus.

Among the top 25 local areas identified by Public Health England as showing a concerning upward trend in case rates per 100,000 people, 16 areas are in the north of England with eight in the Midlands and only one area from the south.

The latest seven-day rolling data to 27 March shows 19 local authorities with a rolling case rate above 100 per 100,000 people, and all of them are in the north of England except Leicester, in the East Midlands. The worst affected areas are Rotherham, with a rate of 170 Covid infections, followed by Barnsley, Doncaster, North Lincolnshire, Wakefield, Bradford and Hull.

Christina Pagel, professor of operational research at University College London, told The Independent: “We are seeing the same things we saw last year and in the autumn, none of the fundamentals have changed. These areas will be left behind, that is the risk of the course we are on.”

Ministers have said the country will not reimpose to regional or local levels of restrictions, with England treated as one under the government’s roadmap out of lockdown.

But Prof Pagel warned if cases got out of hand ministers may have no choice but to return to a tier system and impose measures at a local level.

“I can imagine a lockdown happening again. If case rates do rise again to what we had before that is what we will have to do,” she said. “The alternative to locking down is these areas may have to live with high case rates and the risk of that is new variants spreading across the country.”

She added the government had not done enough to understand the issues facing northern cities, adding: “Vaccination is the only thing in their toolbox and that’s all they are trying to do.”

Last year, Manchester, Leicester and other parts of northern England were some of the first areas to be placed into local tiers as case rates started to rise. Some parts of the north have been under restrictions of some form since July last year.

As the vaccination programme across the UK continues, with more than 31 million people now vaccinated, the link between rising infections and hospital admissions and deaths may be broken. But with significant numbers of people, including at-risk ethnic minorities, not vaccinated, there is a risk of surges in some areas if infections spread as lockdown is eased.

Martin Mckee, professor of European public health at the London School of Hygiene and Tropical Medicine, told The Independent: “This is something we have been worried about for quite some time. At the end of the first wave, we didn’t really get the numbers down enough in the northwest and we opened up too early which allowed the numbers to rise.”

He said rising case rates were likely in areas of high deprivation, low uptake of vaccines and where there was already a high burden of disease and ill health.

“These areas could be the epicentres for future surges,” he warned, adding more needed to be done to “take the vaccine to the people.”

He said “everything possible” must be done to avoid the north going into lockdown and the south avoiding restrictions as he said this would exacerbate the existing inequalities in the country.

Two areas hardest hit by the virus last year were Liverpool and Manchester, where thousands of operations were cancelled and hospitals experienced several waves of the virus.

NHS Providers chief executive Chris Hopson told The Independent the easing of restrictions was welcome but added: “It is vital that no one lets their guard down.”

He said: “NHS trusts in the north of England feel they have borne the brunt of the impact of premature easing and then tightening restrictions over the last year and for them, the reported ‘second’ wave of cases in January was very much a third wave.

“People in parts of the north have also been under tougher lockdown restrictions for longer than the rest of the country.”

He said the country was not out of the woods yet and urged people to stick to the rules to minimise the risk of rising infections. People are now allowed to meet up in groups of six outside, or as two families, regardless of the total.

The prime minister, Boris Johnson, told a Downing Street press conference on Monday that there was nothing in the data that would derail the roadmap out of lockdown. The next stage will see pubs, bars and restaurants open for outdoor serving on 12 April.

Non-essential shops will also reopen for the first time since December.

Dr Layla McCay, director of policy at the NHS Confederation, said the case rate data “show an unsurprising diversity in how the pandemic continues to affect different parts of the country as we all seek to recover from the most recent surges of Covid-19.

“It is vital that the government learns lessons from the last wave and acts quickly to curb any renewed spread of the virus. That must include putting on the brakes in terms of any further easing of lockdown rules if cases start to rise and staying true to their commitment to be guided by the data not the dates.

“The vaccination rollout will help to protect us, which, thanks to the herculean efforts of our NHS teams, means that more than 30 million people have now been vaccinated, but these figures show there is no room for complacency, especially with the threat of new variants on the horizon.”

0 0 0 0
Previous : Neilia Hunter Biden: How did Joe Biden’s first wife and their daughter Naomi die?
Next : Asian woman, 64, stabbed to death in California, but race ‘not a factor’