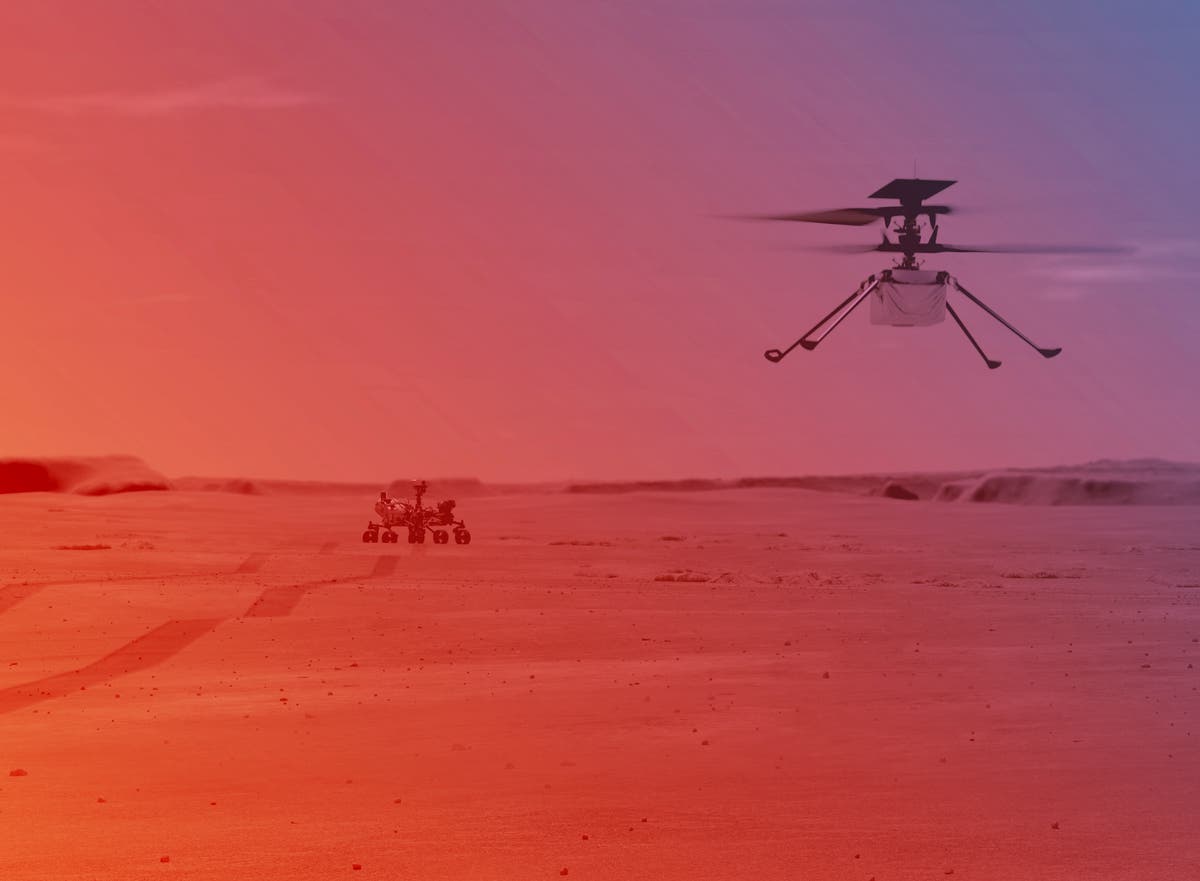 Nasa’s Perseverance rover has dropped Ingenuity, the helicopter that will conduct the first controlled flight on another planet, onto the surface of Mars.

The helicopter fell four inches from the belly of Perseverance onto Mars.

It means that the helicopter is now looking after itself: heating and powering itself, which includes gathering solar energy from panels attached to its body. Temperatures through the night can drop as low as -54 degrees celsius, and an on-board heater aims to ensure that its battery and other components are protected from any damage.

At some point after 11 April, and when preparations are over, Ingenuity will take off for the first ever powered flight on any other planet. It could do so as many as five times over the following month, Nasa said – before its test period is over and it will shut down to lie on the surface forever.

While the four inches from the bottom of the rover to the surface of Mars might seem small, they were among the most critical parts of the mission. They were the end of a process that began with Ingenuity turning around so that it was lying flat to drop onto the surface, and it was key that Ingenuity made it through safely to ensure it could take off.

Nasa also noted that those four inches came at the end of a 293 million mile journey that took the helicopter and its rover from Earth to Mars.

The space agency has not said exactly when the helicopter will take off, only that it will happen “no earlier than” 11 April. Before that happens, Nasa will hae to ensure that its battery is recharging properly, its motors and sensors are working as expected, and unlocking the rotor blades that will carry it.

The first flight will see the helicopter take off, hover a few feet above the ground for half a minute, and then land back down again.

That will be a major test of the technology that has been developed to ensure that Ingenuity can fly safely despite the very thin atmosphere on Mars. It will also represent the first time any object has conducted a power flight on another planet.

If that test is successful, the team will continue to fly further and higher over the 30-day mission period.

Nasa says that Ingenuity’s testing is intended primarily as a technology demonstration, and a proof of the work done to ensure it can fly. It will not conduct any research as it does so.

Perseverance will be at a safe distance throughout that testing, continuing its scientific work.

0 0 0 0
Previous : Robot guide dog could help people who are blind navigate
Next : Bronte fans furious over plan to build council estate on moors that inspired Wuthering Heights: ‘The view will be completely destroyed’