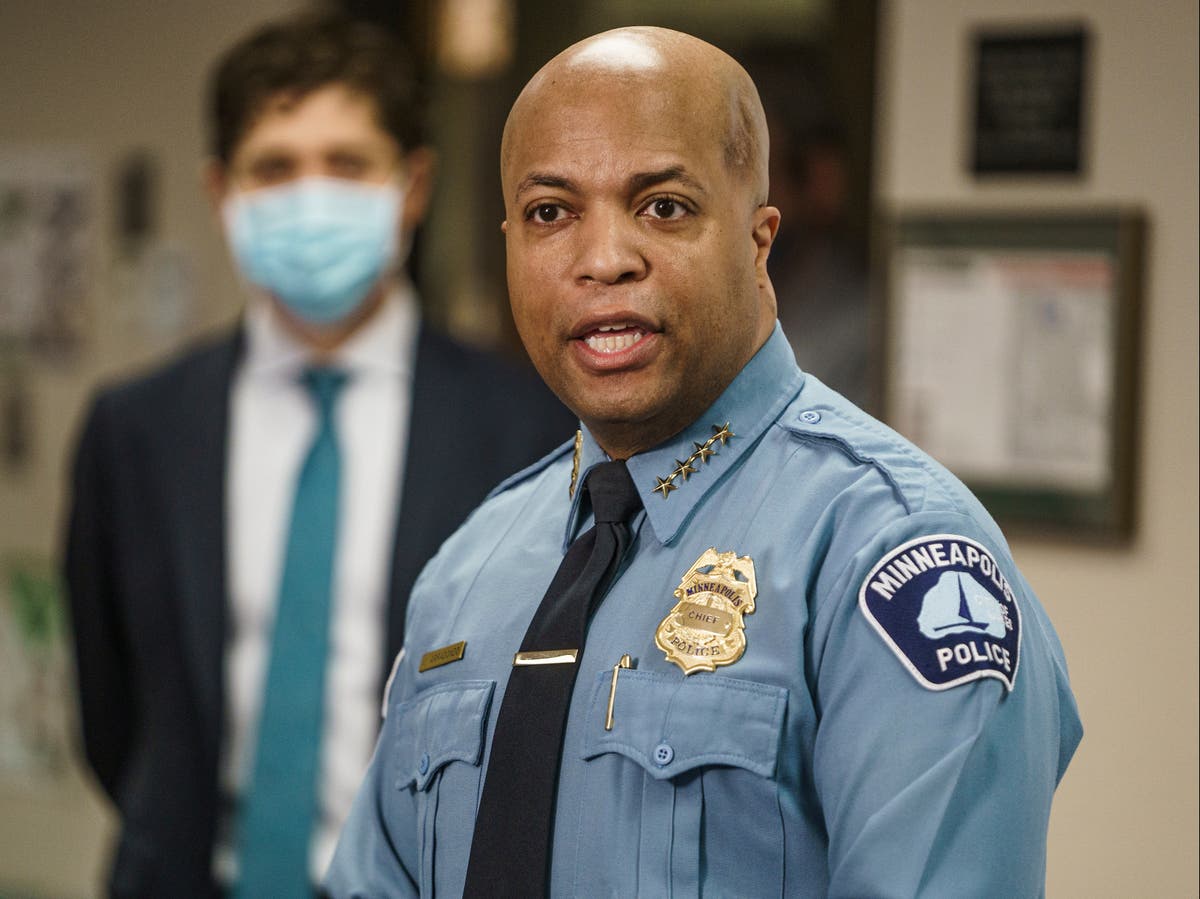 The murder trial of former Minneapolis police officer Derek Chauvin over the death of George Floyd continues on Monday as it enters its second week.

After five days dominated by emotional testimony from eyewitnesses, the evidence is expected to turn towards the officer’s training.

Chauvin’s defence team argues that the officer did what he was trained to do and that Floyd’s use of drugs and underlying health conditions caused his death. However his own colleagues and law enforcement officials have condemned the use of the knee restraint for nine minutes and 29 seconds, with veteran officer Derek Zimmerman describing it as “totally unnecessary”.

Police Chief Medaria Arradondo, who fired Chauvin and three other officers the day after Floyd’s death and later described it as a “murder”, is expected to testify this week, possibly as early as Monday. “Mr. George Floyd’s tragic death was not due to a lack of training — the training was there,” Arradondo said in June. “Chauvin knew what he was doing.”

Experts have described the prosecution’s decision to call the chief to give evidence against one of his own officers as very rare and “pretty remarkable”.

Check out The Independent’s live updates and analysis below.

Who are the leading prosecution and defence attorneys?

Here’s a quick explainer about the trial, focusing on the prosecution and defence teams.

Deciding the case is a jury of nine women and six men, with nine identified as white, four Black, and two of mixed race, ranging in age from 20s to 60s.

Only one member from the family is allowed to attend the trial in Minneapolis because of Covid-19 pandemic restrictions.

Mr Crump said family members were prepared for the defense strategy of blaming Floyd’s drug use for his death, but added: “It’s going to antagonize them over and over when (defense attorneys) try to tell them that his cause of death was not what they saw in this video, but some trace amounts of drugs that was found in his system.”

He also said he believed Chauvin would be convicted, before admitting: “My heart has been broken before, dealing with the American legal system.”

Away from the courtroom, Cher has apologised for a social media post in which she suggested she could have prevented the death of George Floyd.

When will Minneapolis police chief give evidence?

Judge Peter Cahill told the court pool reporter that Minneapolis Police chief Medaria Arradondo will probably testify today – but that could change depending on the progress of the case.

A spokesperson for the Minneapolis Police Department said that the chief is on standby given the “fluctuating cadence of the trial.”

It’s rare for the prosecution to call a police chief to give evidence against their own officer. Dr Cedric Alexander, the former police chief and public safety director of DeKalb county, Georgia, described it as a “pretty remarkable move”.

“It’s very rare that you’re going to see a chief either appear for the defense or the prosecution,” he told the Guardian. “But each one of these kinds of events brings its own set of circumstances. And in this particular case, where you have a knee to the neck and it’s being questioned ‘was that trained technique?’ To be able to have the chief of police… to under oath testify is clearly going to be of importance.”

Experts said it was unusual even taking into account that officers rarely face criminal prosecution. “They need to have someone from the agency say how bad that is,” Geoffrey Alpert, a criminology expert at the University of South Carolina, told Reuters.

Philip Stinson, a criminal justice professor at Bowling Green State University, said: “It may well be the city and the police department are trying to send a message to the community,” he said, “that we’re not tolerating police misconduct.”

Arradondo also testified in the trial of former officer Mohamed Noor, who shot 911 caller Justine Ruszczyk dead in South Minneapolis in July 2017. At that time he was assistant chief.

Police chief set to give evidence against Chauvin

One of the key prosecution witnesses in the case – who could give evidence as early as today – is Minneapolis Police chief Medaria Arradondo.

In June the chief described the actions of his former officer as “murder” and added: “Mr. George Floyd’s tragic death was not due to a lack of training — the training was there…. Chauvin knew what he was doing.”

Outlining his case at the start of the trial, prosecutor Jerry Blackwell told jurors that the chief would not “mince any words”.

“He is going to tell you that Mr Chauvin’s conduct was not consistent with Minneapolis police department training,” Mr Blackwell said. “He’s very clear. He will be very decisive, that this was excessive force.”

The first week of Derek Chauvin’s murder trial heard emotional witness testimony about the death of George Floyd, which was captured on bystander video as Chauvin pressed his knee into Floyd’s neck for nearly nine minutes. The video sparked international outcry and protests against racism and police brutality.

Today, as the second week gets underway, the prosecution case is expected to move on to evidence about the training Chauvin received before the incident.

Hello and welcome to The Independent’s rolling coverage of day six of the Derek Chauvin trial.

0 0 0 0
Previous : Scientists produce biodegradable plastic made from fish waste
Next : 8,000 foreign tourists believed to be coming into UK every day