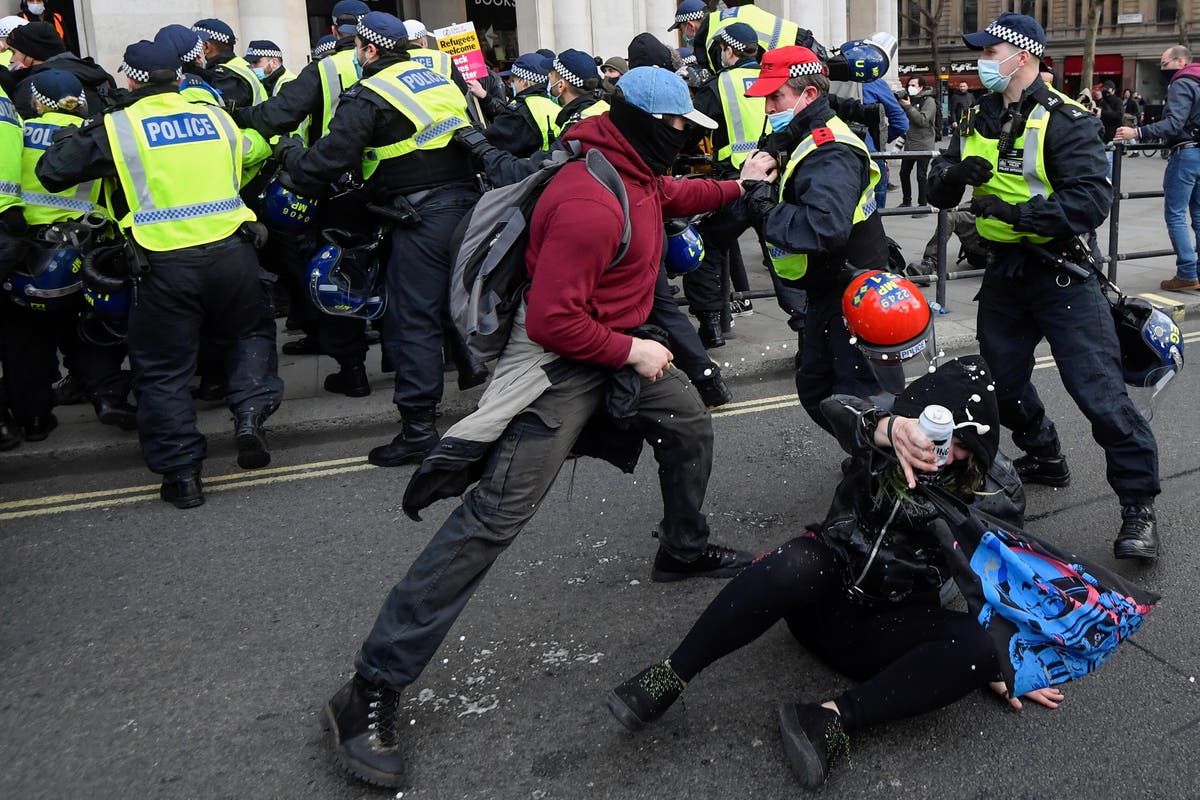 Kill the Bill protests: Police and demonstrators clash in London as thousands march across UK

Police have arrested 26 people following clashes in London as thousands of demonstrators attended marches against a controversial government crackdown on protests.

Scotland Yard said 10 officers were injured, none of them seriously, as violence flared during stand-ofsf between police in riot gear and Kill the Bill protesters in Westminister.

The demonstrations were the latest in a continued outcry over the government’s policing bill, which opponents say threatens to contravene the right to protest.

Despite the Covid-19 lockdown, people marched in towns and cities including London, Newcastle, Birmingham, Liverpool and Bristol against the legislation, which would give police in England and Wales more power to impose conditions on non-violent protests, including those deemed too noisy or a nuisance, and threaten those convicted with fines or jail terms.

Throughout the day, thousands of people took part in what various police forces described as peaceful Kill the Bill protests, with more demonstrations in Manchester, Leeds, Sheffield,  Cardiff, Oxford, Cambridge and Dorset.

Protests are lawful under coronavirus regulations and can go ahead as long as organisers submit risk assessments and have taken all steps to limit the transmission of the virus.

By Saturday evening, the Metropolitan Police said that “a small minority” of protestors, who were not social distancing, were still in London’s Parliament Square.

Arrests were being made after they refused to leave, police said.

A woman was arrested on suspicion of possession of an offensive weapon after a knife was recovered.

Commander Ade Adelekan, who described it as “challenging day for officers”, said: “The vast majority of people who turned out in central London today did so while adhering to social distancing.

“They engaged with my officers when required and left when asked – I would like to thank them for doing so.”

He added: “We remain in the middle of a global pandemic and we have made great progress in controlling the spread of the virus; we will not allow the selfish actions of a small number of people to put Londoners’ progress in jeopardy.”

Dozens of police with riot helmets had arrived in Westminster as protesters continued the stand-off with officers.

The majority of protesters from the Kill the Bill demonstration, who gathered at Parliament Square earlier in the day, had dispersed several hours earlier.

Those still present shouted “shame on you” repeatedly at officers.

The remaining protesters marched down Whitehall to Trafalgar Square, where violent scuffles broke out with police.

Projectiles were thrown by demonstrators and several people were led away in handcuffs.

Earlier at the demonstration in Parliament Square former Labour leader Jeremy Corbyn told crowds that the policing was Bill a “very dangerous, slippery slope,” as he defended the right to protest.

To cheers and applause, he said: “If we don’t protest, things don’t change.”

More than 1,000 people attended Bristol’s Kill the Bill protest, according to Avon and Somerset Police.

The force said that officers had sought to “engage with protesters” and to ensure the demonstration took place peacefully.

Later in the evening, about 100 people began marching again – and Avon and Somerset Police had to shut off part of the M32 motorway to traffic after protesters sat on the road.

The motorway was closed to inbound traffic at junction 3 “in the interests of safety”, a spokesman said.

There was a low-key response from Northumbria Police as hundreds of people gathered beneath Grey’s Monument in Newcastle.

Protesters, including one who held up a placard saying “we will not be silenced”, cheered as a singer with a guitar performed in opposition to the proposed bill.

Demonstrators who marched from the monument through Newcastle city centre chanted: “Whose streets, our streets.”

Many took the knee at the Civic Centre and held a minute’s silence for victims of oppression, after which a round of applause broke out.

Dorset Police thanked those who took part in “peaceful protests” in Bournemouth and Weymouth, and stuck to the Covid-19 restrictions.

Superintendent Richard Bell said: “We have always sought to find the right balance between the rights of protesters and those of residents and businesses, while also considering the very real risks from the spread of the virus.”

In Manchester, protesters gathered in St Peter’s square with placards and banners.

The Kill the Bill protest took place in spite of a 48-hour police dispersal order, which gives officers the power to tell people engaged in anti-social behaviour to leave an area.

Videos on Twitter also showed crowds marching past Leeds town hall, with most protesters wearing masks and chanting “kill the bill” to the rhythm of drums.

A peaceful protest also took place in Bristol, where marches against the legislation in recent weeks been followed by violent confrontations between police and demonstrators.

Protesters organised a flash mob on the city’s College Green, including an unflattering portrayal of home secretary Priti Patel.

The protests are expected to continue, while the feminist group Sisters Uncut has called for a National Day of Action on Easter Sunday, involving a series of small events and actions that can take place from home.

In addition to the proposed restrictions on protests, the bill includes a wide range of measures to increase sentencing for serious criminals, double maximum sentences for low-level assaults on emergency workers, create powers to more closely monitor terrorist offenders released from prison, bring in community sentences for less serious crime and change sexual offence laws to tackle abusive adults in positions of trust.