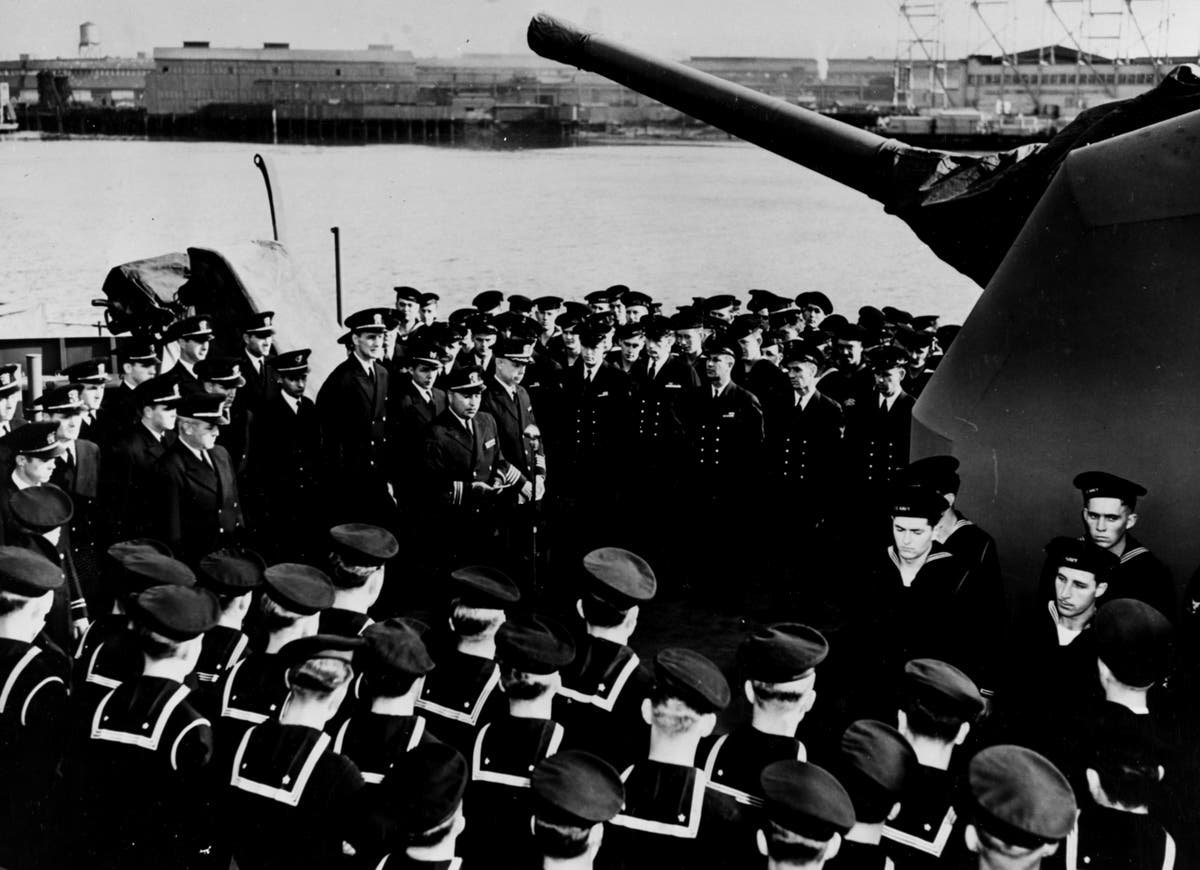 Near the end, the battered American destroyer USS Johnston was surrounded by Japanese warships closing in to finish her off. The Johnston was ablaze. Scores of sailors lay dead. And after three hours of heroic battle, only one of its guns could return fire.

At 9.45am on 25 October 1944, the wounded skipper, Commander Ernest Evans, gave the order to abandon ship, and 25 minutes later the Johnston sank off the Philippine island of Samar.

Evans and 185 members of the crew were lost, and he would become the first Native American in the Navy to receive the Medal of Honour.

But late last month, a manned-submersible operated by Caladan Oceanic, a Dallas undersea exploration company, located the front two-thirds of the ship, sitting upright, along with the bridge, midsection and the identifying hull number, 557.

“No human remains or clothing were seen at any point during the dives and nothing was taken from the wreck,” Caladan said in its announcement.

“The wreck of Johnston is a hallowed site,” said retired Rear Adm. Sam Cox, head of the Naval History and Heritage Command in Washington.

“It … serves as a sobering reminder for today’s Sailors: after all that’s asked of them in day-to-day service, they … may one day be asked for far more,” he said in the Navy’s announcement.

The Johnston was sunk during a huge naval battle in the Philippine Sea as the United States was liberating the island nation from the Japanese and advancing the bloody drive across the Pacific Theater that would end the war 10 months later.

In late October 1944, a powerful force of Japanese battleships and cruisers managed to catch the Navy off-guard and jump a U.S. fleet of small aircraft carriers off Samar.

The Johnston and other small destroyers assailed the Japanese force as the carriers fled, according to historian Ian W. Toll.

“She was nearer to the enemy than any other American warship and therefore came in for special attention from enemy gunners,” he wrote in his recent book, Twilight of the Gods.

Despite the barrage, the destroyer charged away.

“I intend to go in harm’s way,” Evans had said when the Johnston was commissioned in 1943. “Anyone who doesn’t want to go along had better get off right now.”

Evans was from Pawnee, Oklahoma. His mother was Cherokee and his father was half White and half Creek Indian. Despite the racism of the era, he was admitted to the Naval Academy and graduated in 1931. He was 36 at the time of the attack, and he had been the Johnston’s only skipper.

As the splashes from an enemy shell hit nearby, he steered toward the enemy.

“I can see him now,” Bob Hagen, the ship’s gunnery officer recalled, according to Toll. “Short, barrel-chested, standing on the bridge with his hands on his hips, giving out with a running fire of orders in a bull voice.”

The nimble Johnston zigged and zagged, firing off torpedoes and shells, and ducking into smokescreens. But at 7:25 am the monster Japanese battleship Yamato spotted the destroyer and landed three huge shells.

“It was like a puppy being smacked by a truck,” Hagen remembered.

Evans was knocked down. His shirt had been torn off. His hair was singed, and two of his fingers had been ripped off, Toll wrote. Evans got up, wrapped a handkerchief around his hand and resumed shouting orders.

An hour later, another Japanese battleship, the Kongo, loomed, and the Johnston let loose with its small guns, firing 40 shells. They did little damage. The destroyer escaped, but came upon a crippled American aircraft carrier being pummelled by a Japanese cruiser.

“Commander Evans then gave me the most courageous order I’ve ever heard,” Hagen recalled. “‘Commence firing on that cruiser … draw her fire on us and away from’” the carrier.

It was then that the enemy ships closed in and finished the Johnston off.

“Men were floating on the water’s surface or sinking beneath it,” a Japanese sailor reported. “Half-naked crew members jammed themselves into lifeboats and rowed away … We were close enough to see their unkempt beards and the tattoos on their arms.”

A Japanese gunner opened fire, but was ordered to stop. And as the Johnston went down, a Japanese officer was seen saluting from his ship, Toll wrote.

Of the Johnston’s crew of 327, only 141 survived, the Naval history command says on its website. About 50 “were killed by enemy action, 45 died on rafts from battle injuries and 92, including Evans, were alive in the water after Johnston sank, but were never heard from again.”

The suspected wreck site, the deepest shipwreck ever located, was first discovered in 2019 by the late Paul Allen’s vessel R/V Petrel, Caladan said in its statement. But most of the ship was deeper than the Petrel’s submersible could go.

The Caladan submersible has no depth limitation, the company said.

As the expedition ended, the project’s research vessel came to a stop, sounded its whistle, and a memorial wreath was placed on the ocean, the company said.

0 0 0 0
Previous : ‘We owe an apology’: Amazon admits drivers urinate in bottles after dismissing lawmaker’s criticism
Next : Tributes to great-grandmother killed in ‘sustained’ attack as dogs escape through hole in fence