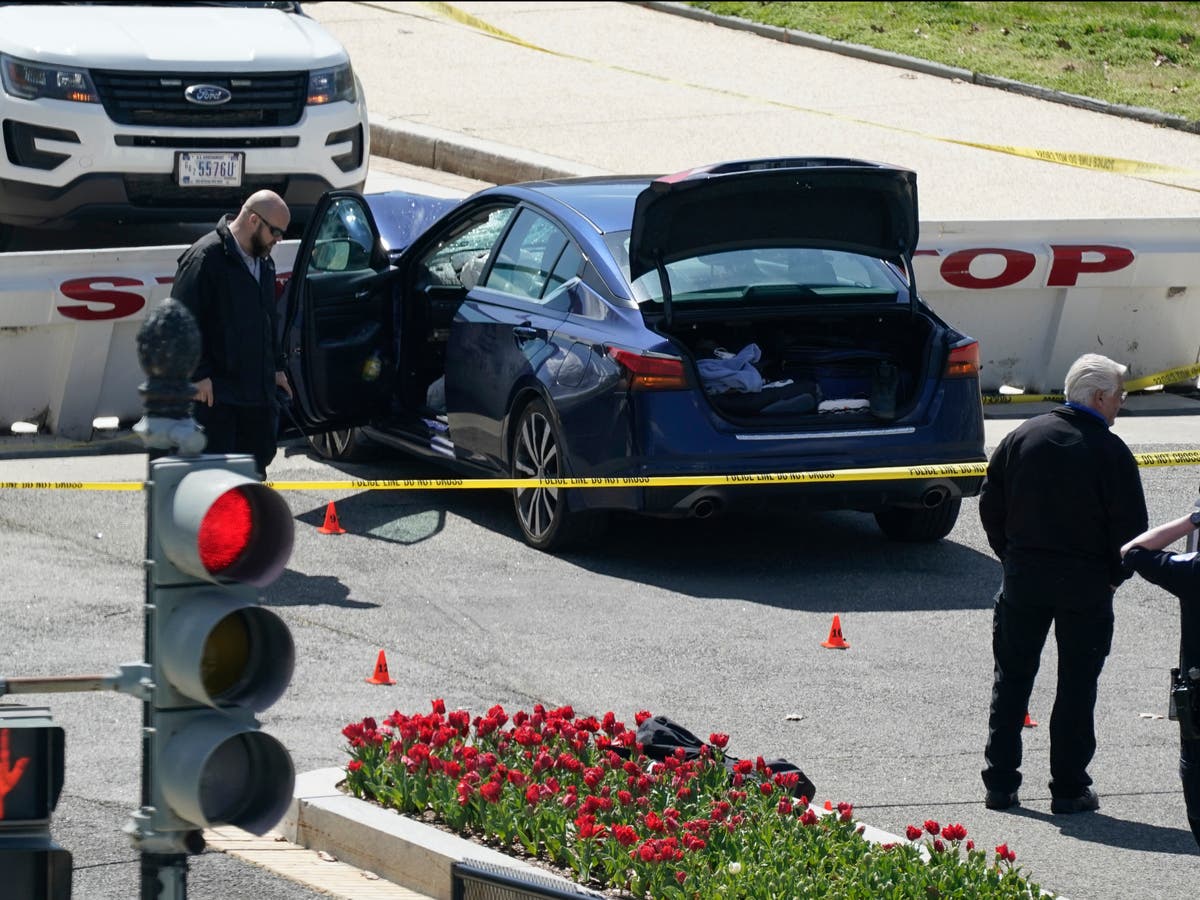 The second attack on the US Capitol building in under three months was preceded by pressure from mostly Republican lawmakers to remove extra security measures put in place after the first.

One Capitol police officer was killed and another injured when a man rammed his vehicle into a checkpoint outside the building on Friday. The suspect was fatally shot soon after by police after he exited the vehicle with a knife.

While little is known about the motives of the attacker, the deadly incident is likely to refocus debate on the security around the house of US democracy.

High fencing and barbed wire was erected around the perimeter of the building in the aftermath of the deadly attack on 6 January, during which supporters of Donald Trump stormed the building and attacked police. Five people died, including a police officer. Extra security measures were subsequently introduced in and around the building.

Since then, those security measures have become something of a partisan political issue, with some Republicans bypassing metal detectors put in place at the entrance to the House floor in protest at what they deemed an attack on their Constitutional right to carry weapons.

Last month, 42 Republican House members sent a letter to Democratic House speaker Nancy Pelosi calling on her “to remove the barbed wire fencing surrounding the Capitol and send the National Guard troops home to their families.”

“Let us be clear. The events that happened on January 6 were horrific. Understandably, certain increased security measures following that date were implemented. But it is time for Congress and its representatives to stop hiding,” they lawmakers wrote.

As recently as March 10, Senate minority leader Mitch McConnell said the enhanced security measures at the Capitol were an overreaction.

“We’ve overdone it. I’m extremely uncomfortable with the fact that my constituents can’t come to the Capitol. There’s all this razor wire around the complex. It reminds me of my last visit to Kabul,” Mr McConnell told reporters.

Republican congresswoman Lauren Boebert posted a video last month featuring the barriers, referring to the complex as “Fort Pelosi” and urging their removal. “It’s time to cut the crap and remember this is the people’s House,” Ms Boebert said. “Madam Speaker, tear down this wall.”

Following a review of the measures, the outer fencing was removed just over a week ago. US Capitol Police said on Twitter that “all of the fencing that surrounded the outer perimeter of the US Capitol Complex has been removed. Affected roads have reopened. The USCP is ready to quickly ramp up security at a moment’s notice, if needed.”

It added: that the inner perimeter fence, around the Capitol Building, is still in place “while the Department works with our congressional stakeholders and law enforcement partners to strengthen our security posture.”

It is unclear what led to the removal of the outer fencing, but originally Capitol police had requested that it stay for an additional 180 days beyond the deadline that expired in March, according to CNN.

In early March, the Pentagon approved a request to extend the presence of National Guard troops at the Capitol until May 23 but reduced the number by around half to 2,300 troops.

Around the same time, USCP chief Yogananda Pittman, who on Friday announced the death of a fellow officer in this latest attack, had proposed permanent fencing around the Capitol.

She said that “vast improvements to the physical security infrastructure must be made to include permanent fencing, and the availability of ready, back-up forces in close proximity to the Capitol”.

At a Senate hearing into the 6 January Capitol attack last month, officer Pittman warned of a “very real and present danger” to the Capitol which “necessitates a significant increase in personnel” to protect it. He told a House committee that threats to members of Congress had risen dramatically by 93 per cent in the first two months of the year, compared with last year.

But the proposal to make fencing permanent was opposed by Democrats as well as Republicans. Many were worried that a permanent, heavy security presence would restrict access to the public.

DC Mayor Muriel Bowser said in late January that “there are some potentially volatile events upcoming that will require extra security. Fencing and the presence of troops will be a part of that. But we will not accept extra troops or permanent fencing as a long-term fixture in DC.”

“When the time is right, the fencing around the White House and US Capitol, just like the plywood we’ve seen on our businesses for too long, will be taken down,” she added.

0 0 0 0
Previous : Care home rules will be relaxed but visitors must be tested and wear PPE
Next : Leicester long lockdown begins to ease a year and six days on