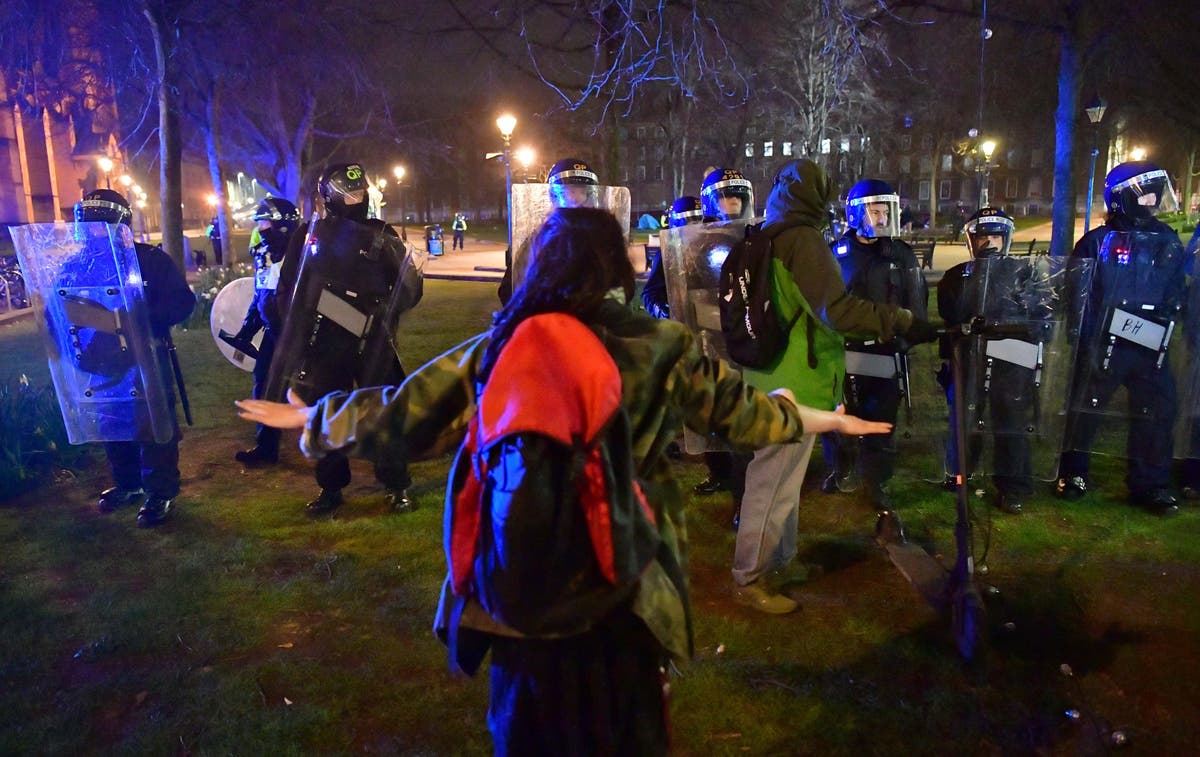 Large numbers of riot police moved in to break up a fresh protest in Bristol that converged at College Green on Tuesday night, two days after a “Kill the Bill” demonstration descended into mayhem.

Around 14 demonstrators were arrested from the gathering of about 130 people to protest against the government’s new Police and Crime Bill that critics say will stifle protest.

“Specially trained public order officers are beginning to disperse a protest from College Green in Bristol,” police said in a tweet.

The protesters pitched tents and installed a sound system as they chanted “our streets” and “shame on you” at the rally.

The crowd was dispersed from College Green after forces from neighbouring Gloucestershire and Wiltshire assisted the police in their efforts. But a significant number of people gathered on Deanery Road have refused to move, the police said in an update early on Wednesday.

“Officers had engaged with protesters and asked them to disperse, but tents and a sound system were set up so it was abundantly clear they were intent on remaining at the location, in spite of legislation in place to protect public health,” Chief Superintendent Claire Armes said.

One of those arrested on Tuesday was taken into custody for offences connected with the violent disorder in the city on Sunday, the police said.

The National Police Air Service, dog units, horses and a police drone unit were deployed for the operation on Tuesday.

“It’s disappointing we needed to take this action on a day we remember those who’ve lost their lives,” the force added, referring to memorials on the anniversary of the first national lockdown.

“The communities of Bristol have made too many sacrifices and worked so hard to defeat this virus, it’s unacceptable for people to insult their efforts in this way.”

Meanwhile, police investigating the weekend’s protest have released pictures of 10 people in connection to the violence. Around 3,000 joined the peaceful demonstration on College Green but the situation turned violent when around 500 people later descended on the New Bridewell police station.

Priti Patel condemned the violence, addressing the House of Commons on Monday, describing it as “anarchic and violent” action.