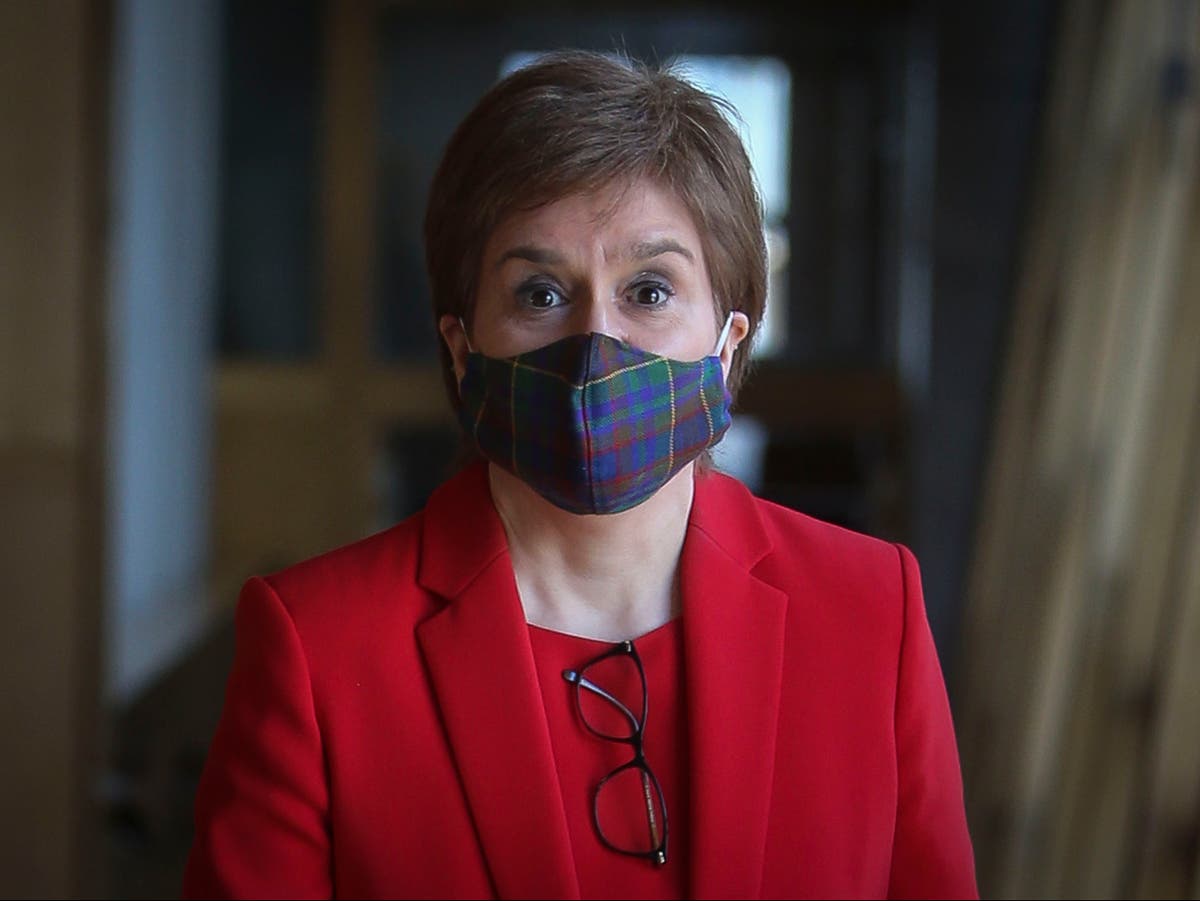 Nicola Sturgeon misled MSPs on a Holyrood committee, which was investigating her role into the government’s unlawful handling of harassment allegations against Alex Salmond, a new report has concluded.

Members probing the Scottish government’s botched inspection of Mr Salmond said they “find it hard to believe” that Ms Sturgeon had “no knowledge of any concerns about inappropriate behaviour on the part of Mr Salmond prior to November 2017”, as she has said.

The four SNP members of the committee disagreed with this statement, saying it “does not distinguish between bullying behaviour and sexual harassment”. They also had differing views to the report’s finding that Ms Sturgeon lied about a meeting in April 2018.

It comes after separate findings on Monday, by James Hamilton QC, which judged Ms Sturgeon had not breached the ministerial code over her role in one of the biggest scandals to ever hit Scottish parliament.

Ms Sturgeon is set to face a vote of no confidence at Holyrood later today, with Scottish Tory leader Douglas Ross insisting it was “up to the Scottish parliament to decide if the first minister has been misleading”. But the SNP leader is expected to survive the vote because the Scottish Greens have already said they will not support such a motion.

Leaks from the Scottish parliament committee investigating the handling of harassment complaints against Alex Salmond were a “great shame”, its convener said.

Linda Fabiani said whoever leaked the information should have the “honour” to come forward.

Speaking to the BBC’s Good Morning Scotland radio programme, she said: “I think that’s a great shame because there’s so much in this report that was taken seriously and that we reached unanimity on. And that should absolutely be the part from our report that the Scottish government considers.”

Ms Fabiani said she hoped whoever was responsible would have the “dignity and the honour to come forward”, saying the virtual nature of the committee meetings had made it hard to tell exactly what was “going on” during the sessions.

Some of the committee’s unanimous findings were “very critical” of the government at ministerial and Civil Service level, she stressed.

Ms Fabiani also criticised both Nicola Sturgeon and Mr Salmond for making it “difficult” for the committee to gain access to vital evidence.

“There certainly was frustration about the difficulty of getting evidence from both major sides in this investigation in fact,” she said on Tuesday morning.

The Holyrood report on Nicola Sturgeon was published less than 24 hours after a separate report by James Hamilton, the independent adviser on the Scottish Ministerial Code, which concluded that the FM had not breached its provisions.

The probing committee said Mr Hamilton’s work had been “completely separate from the work of our inquiry” and argued his findings should not discount their own.

“It remains the case that the Ministerial Code is also in our remit. We have conducted our own evidence taking on this subject,” Tuesday’s report states.

“We consider it important that we report to the parliament on the Ministerial Code in order to fulfil our remit.”

Follow our political correspondent Ashley Cowburn as he gathers all the latest updates in this breaking story:

The four SNP members who sit on the Committee on the Scottish Government’s Handling of Harassment Complaints said in the report it was not fair to accuse Nicola Sturgeon of having misled MSPs because the evidence could not resolutely find she knew Alex Salmond had committed sexual harassment or less serious bullying behaviour.

They claimed that “some evidence to the inquiry indicated that the former first minister could display bullying behaviour” but “there has been no suggestion [Ms Sturgeon] was aware of sexual harassment”.

The report also highlights a “fundamental contradiction” in the evidence the committee heard about a meeting between Ms Sturgeon and her predecessor in her Glasgow home on April 2 2018.

Ms Sturgeon has previously stated it was at this meeting she first learned of the allegations against the former first minister but the committee said there was a difference in accounts from the current first minister and her predecessor on whether she would intervene in matters.

The report said: “Taking account of the competing versions of events, the committee believes that she did in fact leave Mr Salmond with the impression that she would, if necessary, intervene.”

MSPs said this was confirmed by Duncan Hamilton, who had accompanied Mr Salmond to the meeting.

“Her written evidence is therefore an inaccurate account of what happened and she has misled the committee on this matter,” the report said of the FM’s version of events. “This is a potential breach of the Ministerial Code under the terms of section 1.”

Again, the four SNP MSPs on the committee made it clear they disagreed with this section of the report.

Nicola Sturgeon may have misled MSPs on a Holyrood committee, a new report by the Committee on the Scottish Government’s Handling of Harassment Complaints has concluded.

Members probing the Scottish Government’s botched handling of harassment allegations against former first minister Alex Salmond have said they “find it hard to believe” that Ms Sturgeon had “no knowledge of any concerns about inappropriate behaviour on the part of Mr Salmond prior to November 2017”, as she has said.

Just yesterday, the FM was cleared of breaching Scotland’s ministerial code in an independent inquiry run by James Hamilton QC.

Deputy Scottish Labour leader Jackie Baillie has said she would “absolutely” support an investigation into leaks from the Holyrood inquiry into the Scottish government’s unlawful investigation of Alex Salmond.

The Holyrood inquiry into the Scottish Government’s unlawful investigation of Alex Salmond will publish its findings on Tuesday morning.

Speaking on BBC Radio Scotland on Tuesday, Ms Baillie said: “The leaks against the women were particularly bad, because they had the bravery to come forward to speak to the committee.

“It was entirely inappropriate that that information was leaked to the public domain.”

When asked if she leaked the evidence to the press, Ms Baillie responded “absolutely not”, adding: “I would never do that. These two women were very brave in coming forward. I regret the fact that information was leaked. It shouldn’t have been.”

Ms Baillie added: “When a committee meets in private, then that is exactly what they should be – particularly when you’re dealing with such sensitive issues.

“For the two women to come along and give their evidence, for it then to be shared in the public domain, is simply not acceptable.”

Division within the SNP is likely to be impacting support for Scottish independence, a new report has claimed.

The think tank Onward commissioned two polls on support for Scottish independence – with these taking place just before and after Nicola Sturgeon’s appearance before the Committee on the Scottish Government Handling of Harassment Complaints.

In the first of these, 56 per cent said they would vote Yes in a second referendum, with 44 per cent favouring staying in the UK. But the second poll, carried out a week later put support for independence at 53 per cent, with 47 per cent opposed.

The think tank said that while support for independence was “at historical highs” it was also “extremely volatile”.

Its new State of the Union report said: “In our second wave poll, conducted a week later, the Yes lead fell by five percentage points driven in large part by a nine-point swing among women and a 25-point swing among 18 to 24-year-olds towards No.

“This was the week that Nicola Sturgeon gave evidence to the Scottish Parliament inquiry into the Salmond trial, suggesting that division within the independence movement is affecting vote intention.”

With the SNP using May’s Holyrood elections to push for a second referendum, Onward said its poll had found almost half (49 per cent) of all Scots wanted coronavirus to be “completely eliminated in Scotland” before such a vote is held.

It comes after Ms Sturgeon faced backlash on Monday for publishing draft legislation for the second Scottish independence referendum, with Scottish Tory leader Douglas Ross saying the country should focus on recovering from the pandemic first.

Incase you missed it yesterday, Nicola Sturgeon was cleared of breaching the ministerial code over the Alex Salmond controversy, by an independent investigation.

The crucial report, by QC James Hamilton, has ruled: “I am of the opinion that the first minister did not breach the provisions of the ministerial code in respect of any of these matters.”

On the issue of whether the Scottish parliament was misled, his report says that is up to Holyrood “to decide”.

The Hamilton report has been seen as crucial in deciding Ms Sturgeon’s future, more than a separate inquiry by what she called a “partisan” committee of MSPs.

Sturgeon ‘expected to survive vote of no confidence’

Nicola Sturgeon could still be facing a vote of no confidence at Holyrood despite an independent report clearing her of breaching the ministerial code.

The Scottish first minister welcomed the results of the investigation led by James Hamilton, a former director of public prosecutions in the Republic of Ireland. His report, published on Monday, considered whether she had broken the rules of behaviour for ministers in her actions following harassment allegations made against her predecessor Alex Salmond.

But Scottish Tory leader Douglas Ross insisted it was “up to the Scottish parliament to decide if the first minister has been misleading”.

Mr Ross said on Monday: “The first minister has been given a pass because it has been judged her ‘failure of recollection’ was ‘not deliberate’.

“I respect Mr Hamilton and his judgment but we cannot agree with that assessment.”

It is thought Ms Sturgeon will survive if the Tories push ahead and bring a vote of no confidence in her to Holyrood, because the Scottish Greens have already said they will not support such a motion, claiming the Conservatives have shown “no interest in establishing the truth” by lodging the motion before the report was published.

Holyrood’s inquiry into handling of Salmond investigation to be published

The Committee on the Scottish Government Handling of Harassment Complaints will formally publish its report into the Scottish government’s unlawful investigation of Alex Salmond at around 8am, more than two years after it was first established.

The findings are separate from those of James Hamilton QC, who reported on Monday that there had been no breach of the ministerial code by Nicola Sturgeon over her role in the saga.

Committee members have held 14 public evidence sessions, questioning a range of witnesses about the development of the complaints policy that was used unlawfully, the handling of the allegations, Mr Salmond’s successful judicial review and the ministerial code.

Ms Sturgeon was questioned for almost seven hours about her role in the botched investigation, as well as her predecessor Mr Salmond who used his appearance to accuse the FM of multiple breaches of the ministerial code and argue there was a “malicious” plot to remove him from public life.

A leak of the report’s findings last week suggested the inquiry concluded that Ms Sturgeon gave an “inaccurate” account of her meetings and phone calls with Mr Salmond about the investigation.

According to Sky News, the leaked report by the Holyrood committee also finds it “hard to believe” Ms Sturgeon’s evidence of when she first heard about concerns relating to the former first minister’s alleged behaviour.

It also indicated a majority of members are “concerned” it took Ms Sturgeon two months to tell the head of Scotland’s civil service she knew about the investigation.