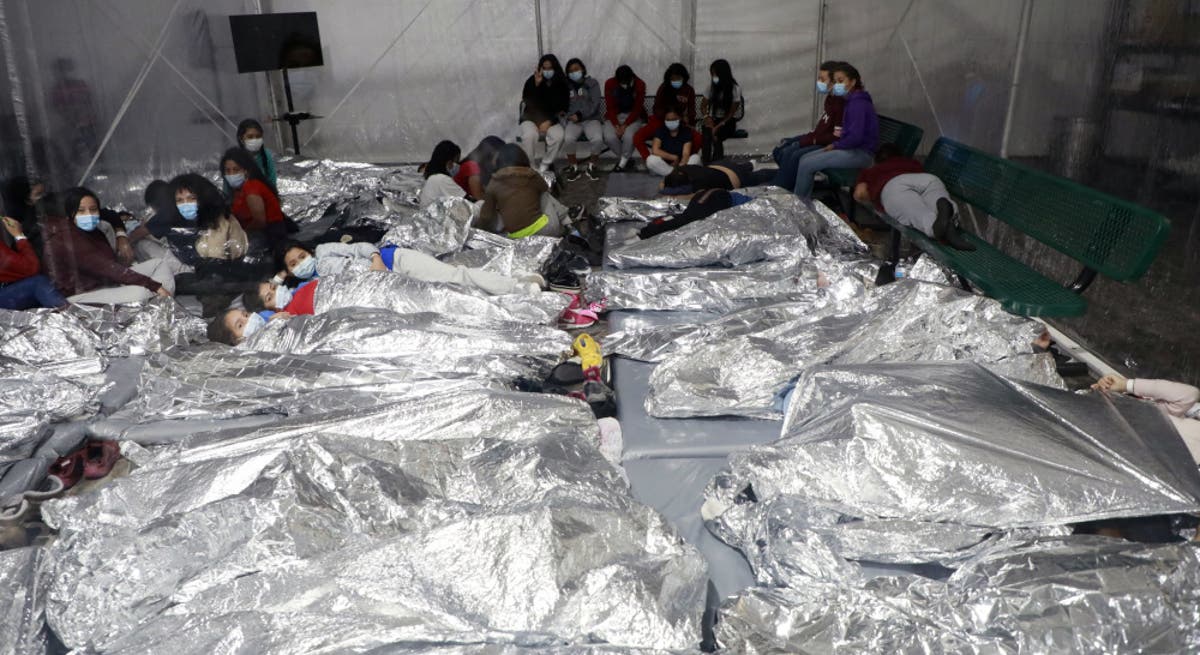 Lawyers who visited unaccompanied migrant children packed into an overcrowded facility in Texas, have said Donald Trump’s decision to turn away thousands of youngsters helped turn the latest migrants into “political pawns”.

Last year, the Trump administration seized on the Covid pandemic to announce on 21 March 2020 it was expelling as many as 13,000 migrants who had been held in US Customs and Border Protection (CBP) facilities. They were sent back to Mexico, under a piece of public health legislation, Article 42, despite critics pointing out they had a legal right to make asylum claims.

In December, a federal court blocked the Trump administration from continuing to deport unaccompanied migrant children. When he assumed office, Joe Biden continued to keep in place large parts of Article 42, but he said his administration would process the claims of unaccompanied youngsters in the US.

In recent weeks, there has been a sharp leap in the number of youngsters being dealt with at the border, leading Republicans to accuse Mr Biden of “opening the borders”. There are approximately 5,000 children in CBP facilities in the Rio Grande Valley, with perhaps as many as 1,000 at the camp south of Donna, just a few miles from the border with Mexico.

Only a handful of people have been able to access the facility. Among those were two lawyers from the National Centre for Youth Law. The group has the right to so, as a result of it being party to a historic ruling from the Supreme Court, known as the Flores Settlement, that in 1997 set regulations regarding the detention and treatment of minors in immigration custody.

One of the lawyers who visited, Neha Desai, told CBS News, that some of the youngsters had been there for as long as seven days, during which they had only showered once. Under the law, the children are only supposed to be held for 72 hours before being passed to the Office of Refugee Resettlement. That agency is responsible for housing them until a sponsor, usually a family member in the US, steps in.

“Some of the boys said that conditions were so overcrowded that they had to take turns sleeping on the floor,” aded Ms Desai.

Yet the lawyers have said while much of the media’s attention has been on the conditions in the facility, and of the political crisis now conferring Mr Biden, they said a proper understanding of what has happened must include the decisions made by the Trump administration 12 months ago.

“What we are witnessing right now is the direct result of what happens when children’s lives are used as political pawns,” one of the lawyers, Melissa Adamson, told The Independent.

“The prior administration seized on Covid-19 as an excuse to turn away thousands of children seeking safety, while President Biden is following the law and allowing these children to seek protection in the United States.”

She added: “Addressing the backlog created by the Trump administration’s border closure and deterrence-based policies is a humanitarian challenge that the Biden administration inherited on day one.”

The Biden administration is scrambling to confront both the political fall-out from crisis, his first since taking office, as well as trying to expand its ability to handle the spike in the number of young people.

The McCallen Monitor reported that Border Patrol agents were told to use “prosecutorial discretion”, which would allow them to release migrants without criminal histories. Rather than being given a court date, they would be expected to report to the office of the border authorities.

It also said that over the weekend, a $89m contract to expand facilities in the region was authorised. It has also opened a facility for up to 700 children at Carrizo Springs, 250 miles northwest of Donna.

Democratic congressman Joaquin Castro, who represents the city of San Antonio, tweeted he planned to visit the facility on Friday and invited other members of the House to join him. Meanwhile, Texas senator Ted Cruz has said he and other Republicans plan to visit the border the same day.

Meanwhile, also on Tuesday, the Pentagon said it had it had received an internal government request to house unaccompanied migrant children at two military facilities in Texas – Joint Base San Antonio, and Ford Hood, located 70 miles north of Austin.