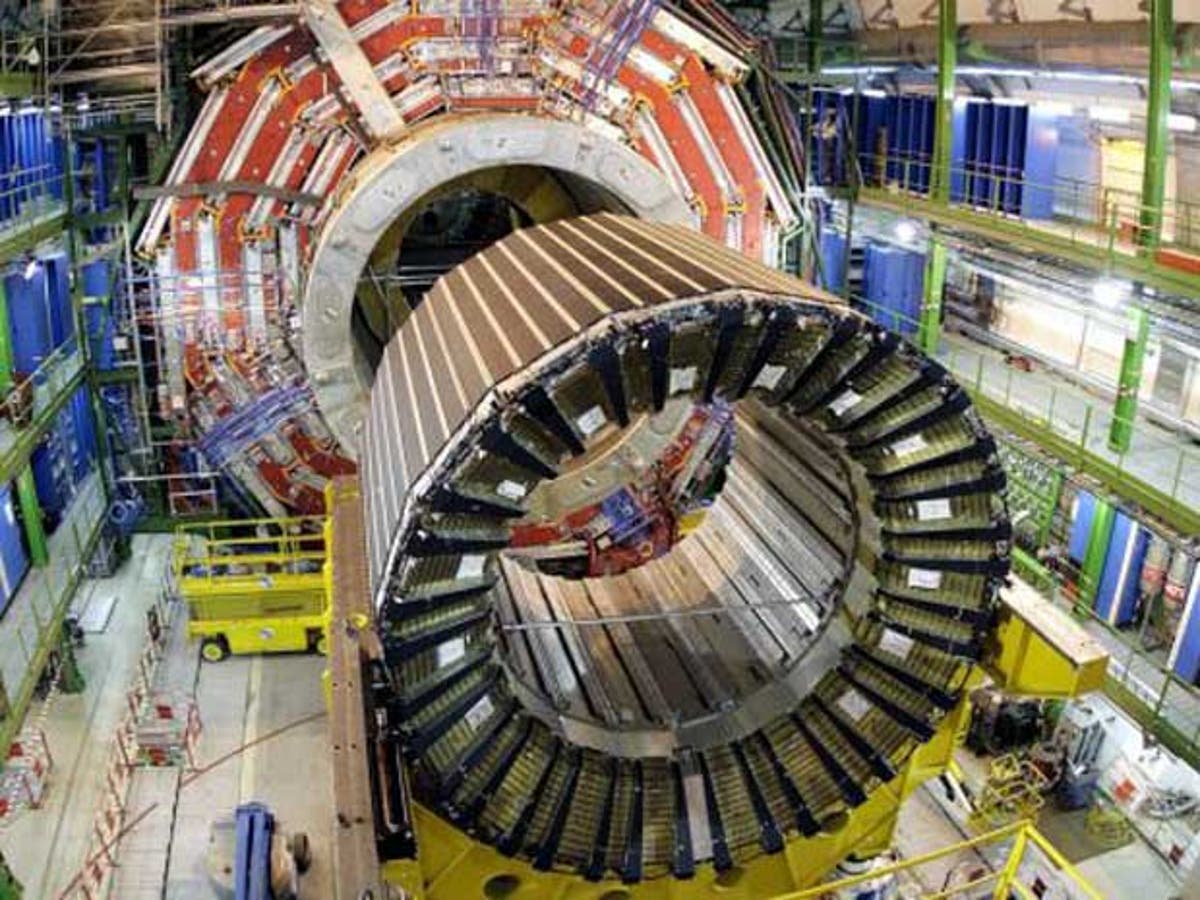 Large Hadron Collider: Scientists say experiment could mark new era in our understanding of the universe

Scientists studying the fundamental forces which govern the universe and everything in it are “cautiously excited” recent experiments could lead to a “new era” in our understanding of physics.

While much scientific experimentation confirms existing hypothesis, it seems what gets scientists really bursting with enthusiasm is the discovery of something which confounds their existing theories.

This is what has happened following recent work by an international team conducting a study on subatomic particles at the Large Hadron Collider (LHC) at Cern, the European Organisation for Nuclear Research, near Geneva in Switzerland

The LHC is the world’s largest and most powerful particle accelerator. It is a 27-kilometre long ring of superconducting magnets buried 100 metres deep below the Alps, where physicists fire streams of particles through the tube at close to the speed of light, before crashing them headlong into one another and examining the results of these impacts.

This finding goes against the existing theory for how we understand the universe.

“We can’t explain these results with the fundamental forces that we know exist,” Dr Mitesh Patel of Imperial College London, who worked on the research, told The Independent.

“If it’s true – and we don’t know that for sure yet – then there’s potentially a new force of nature.”

The existing theory, known as the standard model, was built by scientists during the 1960s and 1970s and is a highly reliable and well-tested means of understanding particle physics, which relates to all the forces present in nature that allow the formation of atoms’ constituent parts.

But ever since the inception of the standard model, physicists have been aware of major gaps in what it can provide answers to, and it is considered a vital stepping stone towards a more complete understanding of reality.

The difficulty is in creating the conditions to observe these gaps, and then explain them.

“The standard model is an incredible theory. Since the 1960s it’s basically been indestructible,” Dr Patel said.

“But it can’t explain what 95 per cent of all the stuff in the universe is – that’s a pretty big flaw for a fundamental theory.”

The standard model is unable to provide a theoretical framework for the relationship between matter and antimatter, as well as some of the observable properties and patterns of subatomic particle creation.

But Dr Patel said that if the results of the experiment are repeated and found to be accurate, it could open the door to a whole new realm of understanding the forces which govern the fabric of the universe.

“It’s a crack in the incredible edifice of the standard model. It gives us somewhere we might push a wedge in and we might see that crack expand,” he said.

The scientists have cautioned that there remains some way to go before the results are fully confirmed.

“The difference we’re seeing has about a one in a thousands chance of being just a statistical fluke,” Dr Patel said.

“That’s enough to get us normally very sceptical physicists at least cautiously excited and certainly wanting to know more, but it’s not at the one in several million chance of a fluke that physicists would demand as a gold standard to make sure that something new is really happening.”

Professor Chris Parkes, who has worked in this field for 25 years and is the lead scientist of the project, told The Independent: “We wanted to put this out because it’s potentially extremely important, but it’s not conclusive at this point.”

“This new result which we’ve just put out today is in one of our key areas. The key areas our detector focuses on are the differences between matter and antimatter and rare decay processes. This result today is in the latter category.

“It’s the decay of the beauty quark – about one in a million times, it decays into a particular final state. And that final state can contain electrons, or it can contain muons – which are like the heavy version of electrons.”

Professor Parkes said this decay of the beauty quark into the two different states is predicted by the standard model to happen at exactly the same rate.

“There isn’t any theoretical uncertainty about this,” he said.

“But what we have seen is a hint, a potential sign, of a deviation from the particles decaying at the same rate as each other. We’re seeing more of the beauty quarks decaying into electrons than into muons.”

“If confirmed it would be extremely exciting because our fundamental theory – the standard model – really has a firm prediction that this shouldn’t occur in this way, so [we would] have to fundamentally modify that theory.”

The hope is that the research might light the path towards a much more complete understanding of the theoretical riddles scientists have uncovered, but as yet, are unsure how to solve.

“It really is the fundamental question humankind has about how the universe works,” Professor Parkes said.

“To be more philosophical or speculative, we know that the standard model, despite its huge successes, there are just huge questions in physics that it doesn’t answer. We know that there are central puzzles, such as the existence of dark matter, or that the universe was created with equal amounts of matter and antimatter, but today it consists entirely of matter.

“There are these big fundamental questions in physics we cannot answer with this theory, and if it turns out we have to revise the theory in some significant way, it could be that we are taking the first tentative steps which could give us insights into these very big questions of physics.”

0 0 0 0
Previous : Lockdown roadmap: ‘I don’t see any real reason not to speed up’
Next : 💬 "WHAT IS BEING DONE ABOUT THE CONGESTION CHARGE?" – THIS IS KILLING BUSINESS IN LONDON