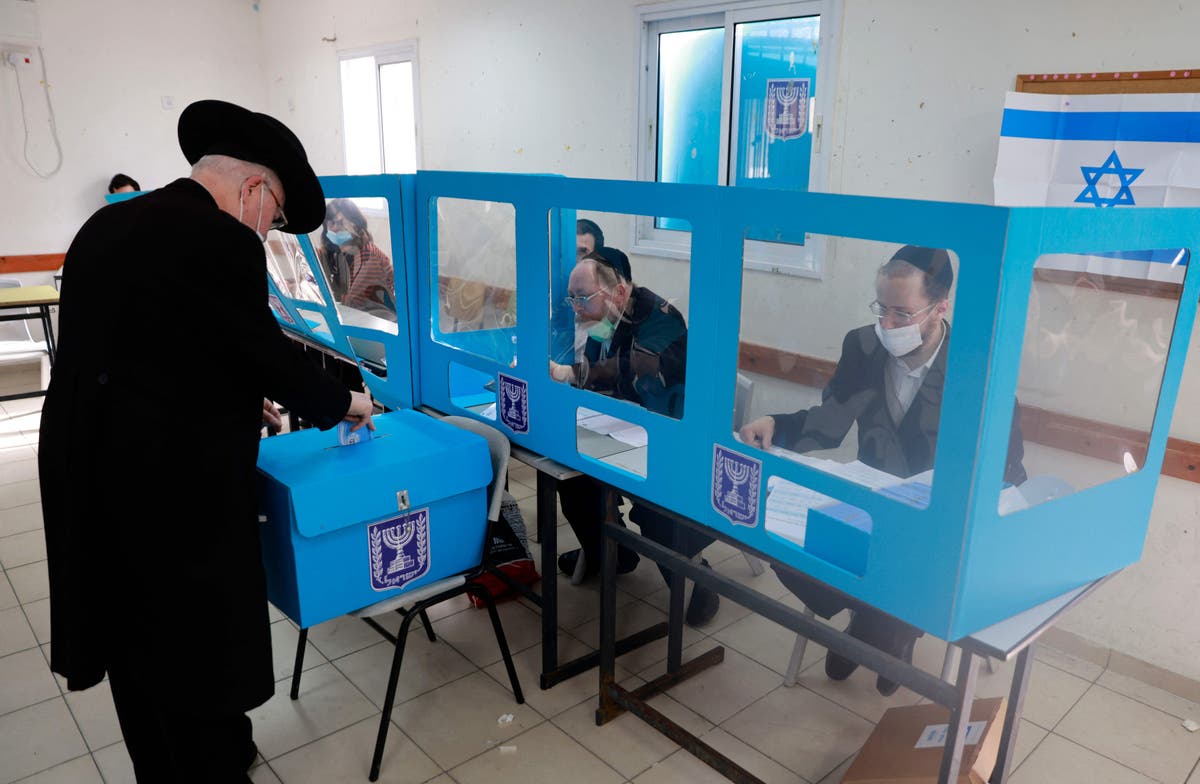 Israelis have begun voting in an unprecedented fourth election in two years that many see as a referendum on divisive longterm leader Benjamin Netanyahu, who hopes the country’s vaccine record will sweep him to victory.

But even as voters headed to the polling booths across the country they were bracing themselves for the spectre of a fifth extraordinary vote, as the last polls predicted yet another inconclusive result.

The final surveys released just a few days ago all indicated a tight and inconclusive race between the bloc that supports Mr Netanyahu, Israel’s longest-serving premier, and those who are against him. They suggest neither will reach the 61-seat majority needed to form a government.

Polling stations opened at 7am (5am GMT) and will close at 10pm (8pm GMT), when exit polls will likely point to voting trends rather than a clear winner because of the tight race.

“I think this is just another reshuffling of the cards, again and again sitting at the same table not happy with the cards,” said Oded, 40, a frustrated voter in Tel Aviv who feared once again the results would be inconclusive but declined to say who he was voting for.

He said he thought the outcome and allocation of seats would be roughly the same as last time. “I think people are now getting desperate in Israel,” he added.

Similar frustrations were voiced by other voters like Chen Zilka, 20, who was handing out flyers for Gideon Saar, who defected from Mr Netanyahu’s Likud party to set up his own New Hope party. MrSaar has presented himself as the only credible right-wing alternative to Mr Netanyahu, and Zilka hopes he could rally enough support to prevent a fifth election.

“I believe [Saar] will lead us into a new start. I voted for Netanyahu for the last three elections and this time I want a new start and a fresh government.  He’s been in power too long and we need a change. I believe Gideon Saar is the only politician with real ministerial experience and I trust him.”

Israel’s five-term prime minister Mr Netanyahu has struggled to bat off competition from rival nationalist and right-wing parties as he has campaigned under the shadow of a corruption trial and the pandemic. His critics have blamed him for failing to enforce lockdown restrictions on his ultra-Orthodox political allies, allowing the virus to spread, saying it has a disastrous impact on the economy and the now double-digit unemployment rate. His opponents also say he is unfit to rule because he is on trial for multiple corruption charges, that he has repeatedly dismissed as a left wing witch hunt.

Among his most vocal opponents are Mr Saar, and his main challenger is Yair Lapid, a former finance minister who heads the centrist Yesh Atid party.

Mr Netanyahu has focused his campaigning on his role in securing millions of vaccine doses from Pfizer Inc and turning Israel into what he dubbed a “vaccination nation”.

The country is leading the world in its inoculation programme with about half of Israelis already having received the jab, drawing international praise for Mr Netanyahu as well as calls for Israel to do more to ensure Palestinians in the occupied West Bank and Gaza receive vaccines. The vaccination programme has allowed the countryto reopen much of its economy before the election.

Posting a video on Twitter of his visit to a Jerusalem hospital on Monday, Mr Netanyahu wrote: “Today we are the first in the world to return to life and smile again.”

Voter turnout may be low because of fatigue and the coronavirus. Tuesday is Israel’s fourth election in just two years, as political parties have failed to singlehandedly sweep a majority of the 120 seats in the Knesset or build lasting coalitions that can push over the 60 seat majority threshold.

The results could be even more conclusive after polling stations close this evening as up to 15 per cent of the electorate is expected to vote outside their home districts in absentee ballots. These results will be tallied separately in Jerusalem and may not be known for days.

The government is dispatching special polling stations, including vehicles, to provide places for them to vote safely.

Adding to the uncertainty of the outcome is the fact that at least four small parties – including Blue and White, once the largest party in parliament – may struggle to cross the 3.25 per cent threshold for entry into parliament.

Mr Netanyahu’s Likud party hopes to form a ruling coalition with his traditional religious and hard-line nationalist allies, including a pair of ultra-Orthodox parties and a small religious party that includes openly racist and homophobic candidates.

But the polls indicate that even with that he may not be able to cobble together enough seats to rule, and so the process of coalition building is expected to take weeks.

He will likely have to woo smaller right wing parties including Yamina, which is headed up by ex-defence minister Naftali Bennett, who according to the polls is expected to sweep around 11 seats but has so far declined to confirm whether he would join Mr Netanyahu or not.

Tuesday’s election was triggered by the disintegration of an emergency unity government formed last May between Mr Netanyahu and his chief rival Benny Gantz (of the Blue and White party).

The two rivals together had struggled amid the coronavirus pandemic, as their unhappy alliance was plagued by infighting. The elections were finally triggered by the government’s failure in December to agree on a budget.