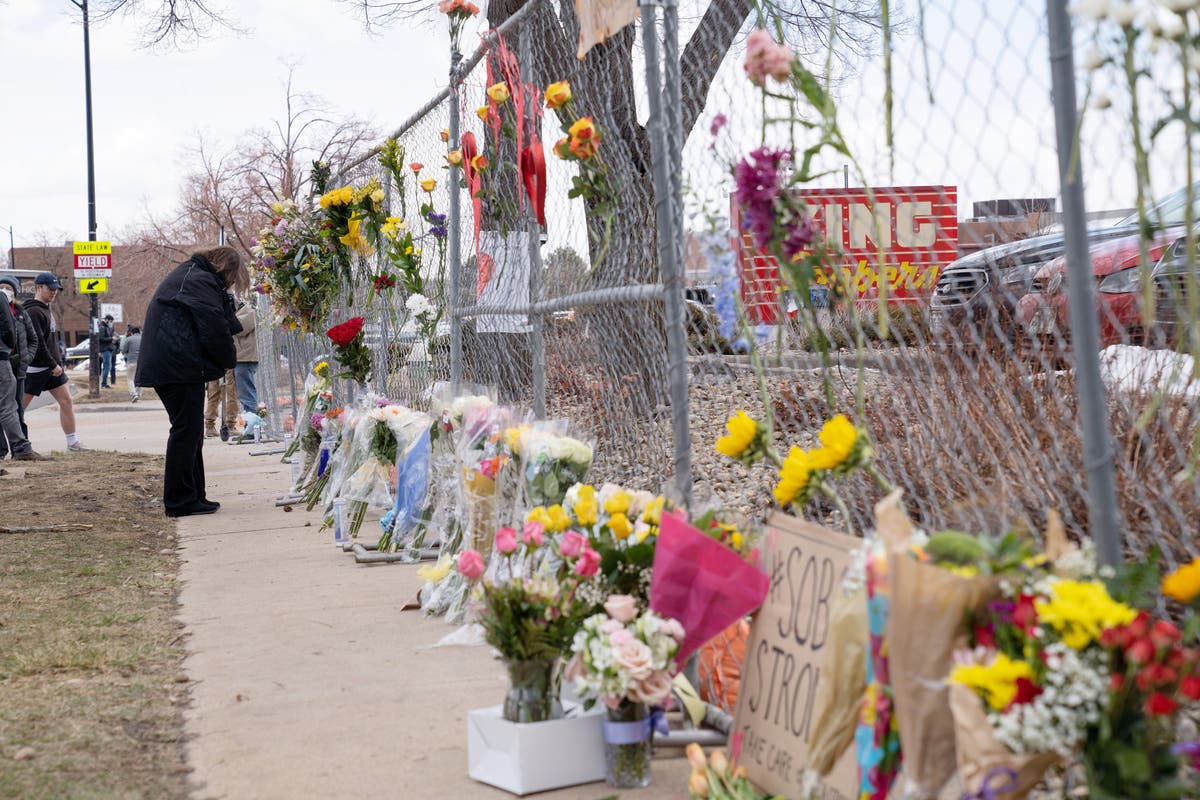 Less than two weeks before a citywide assault weapons ban was blocked in court, a gunman carrying an AR-15-type rifle killed 10 people at a supermarket in Boulder, Colorado.

It marked the nation’s seventh mass shooting within as many days, less than a week after eight people were killed during a shooting spree at three Atlanta-area spas, which prompted officials across the US to once again reckon with the nation’s overwhelming rates of gun violence and the politically volatile subject of gun control.

Colorado, like much of the US, has seen a lethal and persistent plague of gun violence for decades, met by a strong defense of the constitutionally protected right to bear arms, Republican opposition to alleged government overreach, once-powerful lobbying groups that have poured enormous resources into protecting a sprawling industry, and a smattering of gun control measures tied up in litigation.

Following the killing of 13 people at Columbine High School in 1999, northern Colorado has seen at least nine school shootings and four other mass shootings within 20 miles of the school.

James Eagan Holmes launched tear gas canisters into a Century 16 movie theater in Aurora before fatally shooting 12 people and injuring at least 70 others in 2012. In 2015, a shooting at a Planned Parenthood clinic in Colorado Springs left three people dead and injured nine others.

Within the decade between 2009 and 2018, at least 1,214 people were killed and 834 were wounded in 194 mass shootings in the US, an average of 19 shootings each year, according to gun control advocacy group Everytown for Gun Safety.

In 2020, at least 513 people were killed and more than 2,500 people were injured in 611 mass shootings in the US, according to the Gun Violence Archive.

That year, Colorado reported 11 mass shootings that killed six people and injured 52 others, including a mass shooting in Denver on 16 August that saw two people killed and four others injured. At least nine people were injured in a separate shooting earlier that month.

A judge blocked a local ban on assault weapons

In 2018, in the wake of the killing of 17 people at Marjory Stoneman Douglas High School in Parkland, Florida, the Boulder City Council unanimously passed two ordinances that banned the possession of assault-style weapons and high-capacity magazines, defined as “any ammunition-feeding device with the capacity to accept more than 10 rounds”.

The ban on assault weapons included certain pistols and semi-automatic rifles with pistol grips, folding or telescoping stocks, or grips that allow a weapon to be held with a non-trigger hand.

Boulder’s City Council also created a permit system for people who had previously owned any of those weapons.

The measures faced stiff opposition from gun rights groups across the state, and they were the subject of a lawsuit from two Boulder residents, gun shop owners and the Colorado State Shooting Association.

“A judge in the Centennial state gave law-abiding gun owners something to celebrate,” the organisation said in a statement on 15 March.

Colorado Ceasefire has urged the state legislature to “act, now, to repeal the state preemption law, which prohibits communities from making their own residents safer by enacting their own gun restrictions.”

“Further, local law enforcement must do more to ensure the Colorado ban on high-capacity magazines is being enforced,” the organisation said in a statement.

The US House of Representatives has passed a measure to close the so-called “Charleston loophole” by increasing a federal background check review period for gun sales to 10 days.

White supremacist Dylann Roof, who killed nine Black members of a church in Charleston, South Carolina in 2015, was able to purchase a firearm despite a criminal conviction due to a lapse in the FBI’s background check process.

Only two Republicans supported its passage.

In Colorado, Democratic lawmakers have maintained a majority in Colorado’s legislature, where at least three gun control-related measures are up for debate in 2021 – including the creation of a mandatory waiting period between buying a gun and getting one’s hands on it.

According to the Giffords Law Centre, 10 states and Washington DC have the District of Columbia have mandatory waiting periods in place. Hawaii requires prospective gun buyers to wait 14 days between their purchase and pick up. In California, that waiting period is 10 days.

But for most Americans, prospective gun buyers in most circumstances can purchase a gun after filling out paperwork and facing a background check that can take just minutes. Most people in Colorado – roughly 99.4 per cent of the population – live within 10 miles of a gun dealer, according to Everytown. The rest of the US lives in similar proximity.

Colorado Rep Tom Sullivan, who ran for office following the death of his son Alex in the Aurora shootings, has sponsored state legislation to introduce mandatory waiting periods in the state.

In 2019, state lawmakers passed a so-called “red flag” law that allows a judge to order the temporary seizure of a weapon from a person deemed a risk to themselves or others.

The state is considered a “shall issue” state for concealed carrying, with five-year permits determined by sheriffs. No permit is required for concealed carry in vehicles – pistols can legally be carried with a loaded chamber and magazine.

But the Giffords Law Centre gave the state a  “C+” overall on its gun law scorecard. The centre has recommended Colorado lawmakers pass “requirements for waiting periods for all firearm sales”.

The centre also recommends the state “enact a child access prevention law, require the reporting of lost and stolen guns, raise the minimum age to purchase a gun to 21, and prohibit violent hate crime offenders from accessing guns”.

Colorado’s passing “grade” places the state 16th nationally, with 12 others states with stricter gun laws ahead of it. Only two states – California and New Jersey – have “A” ratings, while 20 others have “F” ratings.