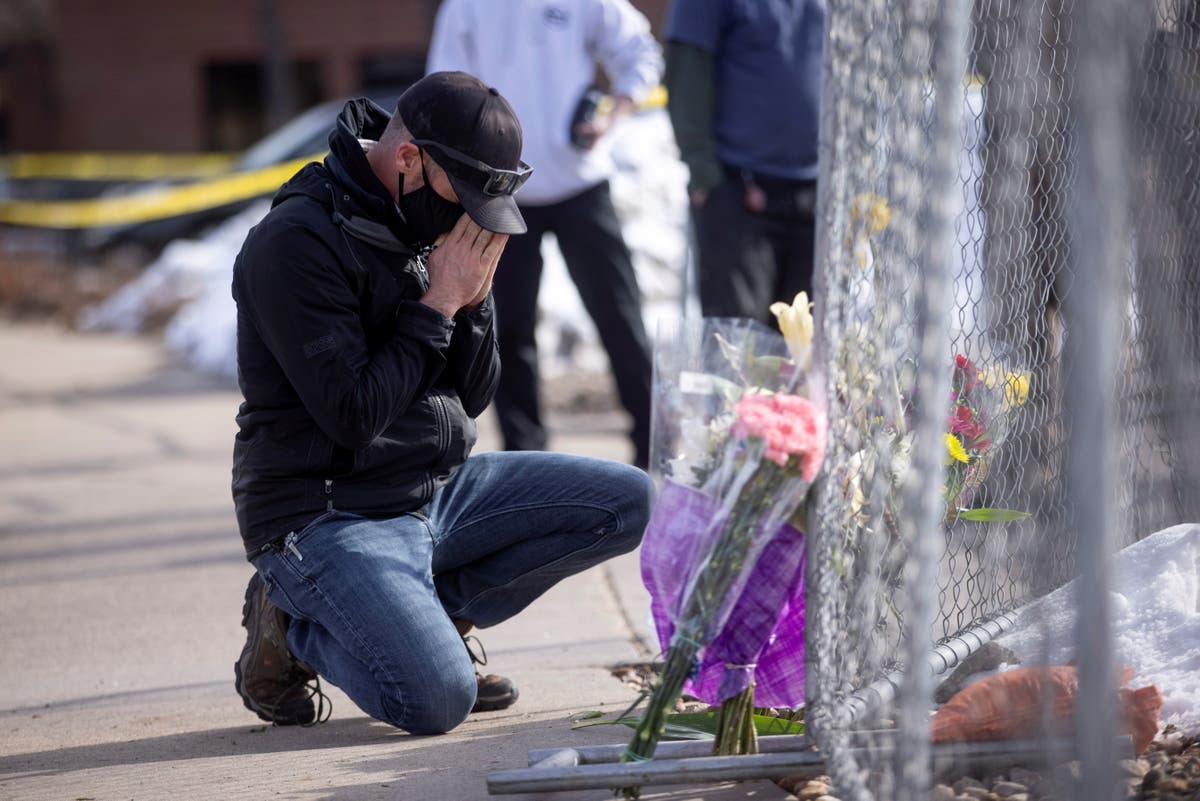 Colorado shooting: Everything we know about 10 victims killed in attack

Police have identified the 10 victims of the mass shooting at a King Soopers grocery store in Colorado.

Among them was an 11-year veteran of the Boulder Police Department, Eric Talley, 51, and multiple staff of the grocery store, including the youngest victim, Denny Stong, 20.

Kevin Mahoney, 61, walked his daughter down the aisle at her wedding last summer and was expecting the birth of a new granddaughter.

As details continue to emerge of the 10 lives lost and the loved ones they left behind, this is what we know so far.

Denny Stong, the youngest of the 10 victims, worked at King Soopers since 2018 and was a supporter of Second Amendment gun rights, according to his Facebook profile.

His last post on 8 March said all he wanted for his birthday this year were donations to National Foundation for Gun Rights, which works to expand pro-gun precedents and defend gun owners.

“I’ve chosen this nonprofit because their mission means a lot to me, and I hope you’ll consider contributing as a way to celebrate with me,” he wrote.

He was an enthusiast of motorcycles and planes, and proud of his role as an essential worker during the coronavirus pandemic.

“I can’t stay home, I am a Grocery Store Worker,” he wrote on his profile picture.

Mr Strong was also training to be a pilot,according to his best friend’s mother, Laura Cole Spicer.

“My heart breaks. My son’s best friend, Denny Stong was killed at the Boulder King Soopers yesterday. He was 21 and was training to become a pilot. Ben is crushed,” she wrote on Facebook.

She worked as a front-end manager at King Soopers, her aunt Lori Olds told The Denver Post.

“Thank you everyone for all your prayers but the Lord got a beautiful young angel yesterday at the hands of a deranged monster,” Lori Olds wrote in a public post on her Facebook page Tuesday morning.

Her uncle, Bob Olds, told CNN that she was a “strong independent young woman” raised by her grandparents.

“She was so energetic and charismatic and she was a shining light in this dark world,” he told the outlet.

“Rikki baby, you were taken too soon,” he wrote.

Recently engaged to be married, Ms Bartkowiak was the oldest of four children who moved from California to open the store selling yoga and festival clothing in Boulder, her Michael Bartkowiak, told The New York Times.

He remembered her as “just a beam of light” who lived with her Chihahua, Opal, and had gone to the shopping centre for a prescription when gunned down.

“She had just gotten engaged. She was, you know, organic — stir fries, salads — she was always trying to be healthier,” he told the Times.

Ms Bartowiak’s clothing and accessories store named after the Balinese word for “sisters” was home to her passion for music and sense of life and happiness, friend Christopher told The Denver Post.

Christopher, who befriended Ms Bartkowiak after opening a coffee shop next door to her South Boulder store, told the outlet that she had been happier in recent months thanks to a new relationship.

“She was an amazing human being, I just saw her a couple of days ago, showing nothing but kindness and love to me, like always,” Christopher told the Post. “She was very tied into the music and festival scene here… Everyone knew her.”

Suzanne Fountain worked for many years as the front house manager of the live music venue, etown Hall, in downtown Boulder, according to friend Helen Forster.

Ms Forster, owner of the music venue, told The Washington Post that she has been friends with Ms Fountain since they met in a community play during the late 1980s.

“She was one of the kindest people I’ve ever known,” Ms Forster told the outlet. “Just in the way she dealt with people and in the way that she was always fair and calm and reassuring. She just was a joy to be around.”

“A lot of people love her. So many people, I couldn’t even begin to fathom. She’s touched a lot of people in her short life,” she added.

Teri Leiker worked at the King Soopers grocery store for 30 years and was dating a colleague who was also working at the time of the shooting, friend Lexi Knutson told Reuters.

“Her boyfriend and her had been good friends and began dating in the fall of 2019. He was working yesterday too. He is alive,” Ms Knutson told the outlet.

Ms Knutson has been friends with Ms Leiker since the pair met in 2017 at a University of Colorado program to foster relationships between students and “members of the community with intellectual and developmental disabilities”.

Eric Talley was an 11-year veteran of the Boulder Police Department and was the first to respond to the mass shooting, according to police chief Maris Herold.

“He’s a very kind man. He didn’t have to go into policing. He had a profession before this, but he felt a higher calling. And he loved this community,” Ms Herold said, according to CNN.

Mr Talley enrolled in the police at the age of 40 in 2010 after a successful career in IT, giving up pay and time with his family to join the academy without a guaranteed job, Jeremy Herko, a lieutenant with the Arapahoe County Sheriff’s Office, told The Washington Post.

He is survived by his wife and seven children aged between seven and 20-years-old, father Homer Talley, said in a statement.

“He had a great sense of humour, he was a prankster… He loved his kids and his family more than anything,” Mr Talley said.

Sister Kristin Stillwell said on Twitter her big brother always wanted to be a pilot if not for his colour blindness.

“My heart is broken. I cannot explain how beautiful he was and what a devastating loss this is to so many. Fly high my sweet brother,” she said.

Mr Talley was one of three officers known for wading calf-deep into the water to rescue a family of ducklings from a drainage ditch in 2013, according to the Boulder Daily Camera.

Kevin Mahoney last summer walked his daughter, Erika, down the aisle at her wedding and was expecting the birth of a new granddaughter.

“I know he wants me to be strong for his granddaughter,” Ms Mahoney posted to Twitter.

She added: “My dad represents all things Love. I’m so thankful he could walk me down the aisle last summer.”

This is a developing story and will be updated.