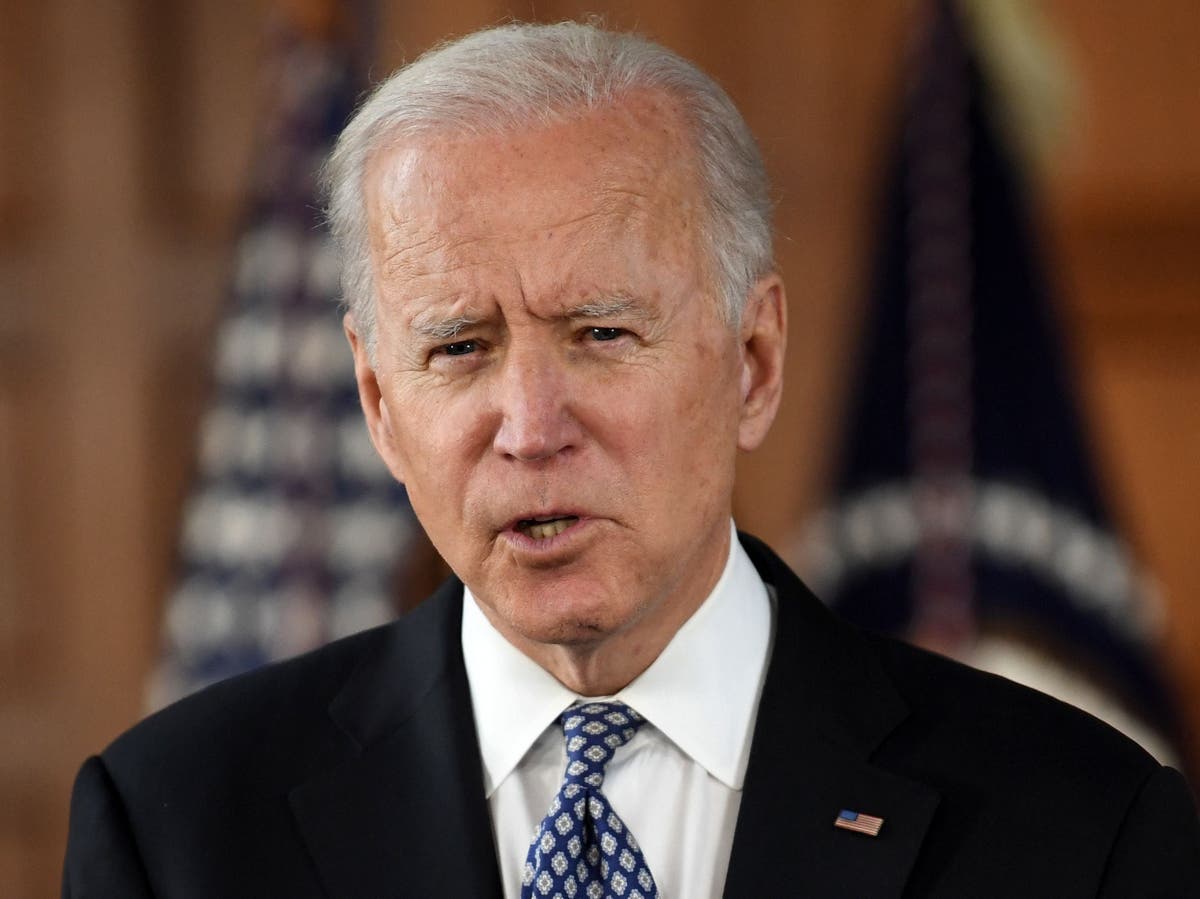 Joe Biden is working up a sweeping $3 trillion (£2.18 trillion) package of investments on infrastructure and domestic needs dubbed the “build back better” plan.

The president is speaking with congressional Democrats about the scheme, which forms part of his plan for the US’ recovery from coronavirus.

Also today, Mr Biden will head to Ohio as part of a promotional blitz for Obamacare, which has been bolstered by his $1.9 trillion (£1.37 trillion) Covid-19 relief legislation.

He will speak in Columbus while his new health secretary, Xavier Becerra, travels to Carson City in Nevada and Doug Emhoff, the first gentleman, visits Omaha, Nebraska.

The Affordable Care Act’s premium subsidies have been increased under the Covid-19 relief plan, meaning consumers who buy insurance policies through HealthCare.gov will pay hundreds of dollars less out of their own pockets.

It comes as questions are raised over whether Jill Biden will have any role in helping reunify families separated at the US-Mexico border under Donald Trump. Previously, Dr Biden’s team said her top aide would monitor the federal effort to get children back to their parents, but Politico now reports that the first lady will have “no formal role”.

Jill Biden will have “no formal role” in the effort to reunify families separated at the US-Mexico border under the Trump administration, according to a report.

However, Politico now reports that she will not play an official part in the federal effort to get children back to their parents.

The Independent has contacted the White House for more information.

A Chicago suburb in Illinois has become first place in the US to approve reparations for Black residents to compensate them for historical racism in the form of slavery, segregation and housing discrimination.

The Evanston city council voted to approve the first phase of reparations to provide $400,000 to 16 qualifying households, giving $25,000 each on home repairs or down payments on property.

“Right now the whole world is looking at Evanston, Illinois. This is a moment like none other that we’ve ever seen, and it’s a good moment,” said Ron Daniels, president of the National African American Reparations Commission.

Meghan McCain, the co-host of ABC’s ‘The View’, tweeted out an apology on Monday after being criticised for anti-Asian comments by John Oliver during his show.

“I condemn the reprehensible violence and vitriol that has been targeted towards the Asian American community. There is no doubt Donald Trump’s racist rhetoric fuelled many of these attacks and I apologise for any past comments that aided that agenda,” tweeted Ms McCain.

Her apology came after Mr Oliver, on his show “Last Week Tonight” on HBO, spoke about racism against Asian Americans and pointed out that last year Ms McCain had supported former president Donald Trump calling Covid-19 the “China virus.”

Russia and China have said they both want a summit of permanent members of the UN Security Council amid what they called heightened political turbulence, with Moscow saying the countries believed the United States was acting in a destructive way.

The allies, whose relations with the West are under increasing strain, made the call for a summit in a joint statement on Tuesdya, following talks between their foreign ministers in the city of Guilin.

“At a time of increasing global political turbulence, a summit of the permanent members of the UN Security Council is particularly necessary to establish direct dialogue about ways to resolve humankind’s common problems in the interests of maintaining global stability,” they said.

The statement did not mention the United States by name. But Russia’s foreign minister, Sergei Lavrov, told reporters that Moscow and Beijing were both unhappy with American behaviour.

“We noted the destructive nature of US intentions, relying on the military-political alliances of the Cold War era and creating new closed alliances in the same spirit, to undermine the UN-centered international legal architecture,” Mr Lavrov said.

“We emphasised that against the background of active attempts by the West to promote its concept of a ‘rules-based world order’, the joint efforts of Russia and China … to preserve the modern system of international law are becoming more and more relevant.”

Fresh off passage of the COVID-19 relief bill, Joe Biden is assembling the next big White House priority, a sweeping $3 trillion (£2.18 trillion) package of investments on infrastructure and domestic needs.

Mr Biden huddled privately late on Monday with Senate Democrats as Congress has already begun laying the groundwork with legislation for developing roads, hospitals and green energy systems as part of his “build back better” campaign promise.

Much like the $1.9 trillion (£1.37 trillion) coronavirus rescue plan signed into law earlier this month, the new package would also include family-friendly policies, this time focusing on education and paid family leave.

The White House plans are still preliminary, with a combined $3 trillion in spending proposed to boost the economy and improve quality of life, according to a person familiar with the options who insisted on anonymity to discuss private conversations.

Donald Trump’s former lawyer Sidney Powell has submitted in court that her assertion about voter fraud after the 2020 US presidential election was opinion, and not a statement of fact.

Ms Powell is seeking dismissal of the $1.3bn lawsuit against her by Dominion Voting Systems, which has alleged that the conservative legal firebrand defamed the election voting technology company with conspiracy theories in the weeks following the polls.

Ms Powell, who is notable for saying her lawsuits challenging the election were akin to “releasing the Kraken”, made Dominion Voting Systems the centre of her baseless legal challenges to the 2020 election results.

Antony Blinken has said his first visit to Nato today is designed to rebuild and revitalise the transatlantic military alliance and to share American plans on any possible withdrawal from Afghanistan.

Nato’s European members have welcomed the change in tone from Donald Trump’s administration to Joe Biden’s.

Joe Biden’s administration has continued to lobby Germany against completing the Nord Stream 2 gas pipeline from Russia, which it says is a security risk.

Antony Blinken, the secretary of state, said the plan ran counter to the European Union’s own interests and could undermine Ukraine.

Speaking on his first visit to Nato, Mr Blinken said he was due to meet his German counterpart, Heiko Maas, to discuss the pipeline. The US has opposed it for more than a decade.

“President Biden has been very clear, he believes the pipeline is a bad idea, bad for Europe, bad for the United States, ultimately it is in contradiction to the EU’s own security goals,” Mr Blinken said as he met Nato secretary-general Jens Stoltenberg.

“It has the potential to undermine the interests of Ukraine, Poland and a number of close partners and allies,” Mr Blinken said, adding that a US law required Washington to impose sanctions on companies participating in the Nord Stream 2 project.

The pipeline is about 95-per-cent finished, and could be completed by September.

Joe Biden is facing continued pressure from journalists to allow them access to document the mounting crisis at the US-Mexico border.

The administration was criticised after reporters and photographers were banned from accompanying the homeland security secretary to the area last week.

On Monday, the White House said plans to allow journalists access were still being finalised. Mr Biden had promised his administration would be transparent with the media, following four years of abuse and demonistation of journalists by Donald Trump.

John Moore, a Getty Images photojournalist who has documented the border under four presidents, penned an op-ed for The Washington Post today in which he said he was forced to cross into Mexico to photograph migrants crossing the frontier, and the activities of border guards.

He wrote: “Most asylum seekers cross the Rio Grande into South Texas on land controlled by federal agents. For decades, the US government has let journalists accompany Border Patrol agents and other officials as they surveil the land. But since the change in administration, those agents have been physically blocking journalists from the riverbank.

“For example, after being turned down for official access on a trip in February, I followed a Border Patrol transport bus in my own vehicle to where agents were detaining migrants. They stopped me before I got close enough to take pictures. They called a supervisor, and ordered me to leave immediately.

Yesterday, Republican and Democrat politicians said they thought the Customs and Border Protection facilities should be more open to journalists.

And images from inside those installation were eventually leaked by a Democratic congressman.

Trump leaves Pence off list of ‘very good’ Republicans for 2024

0 0 0 0
Previous : Matt Hancock says he ‘regrets all the deaths’ on first lockdown anniversary
Next : Bristol protests: ‘This Tory government has crushed civil liberties for a year’