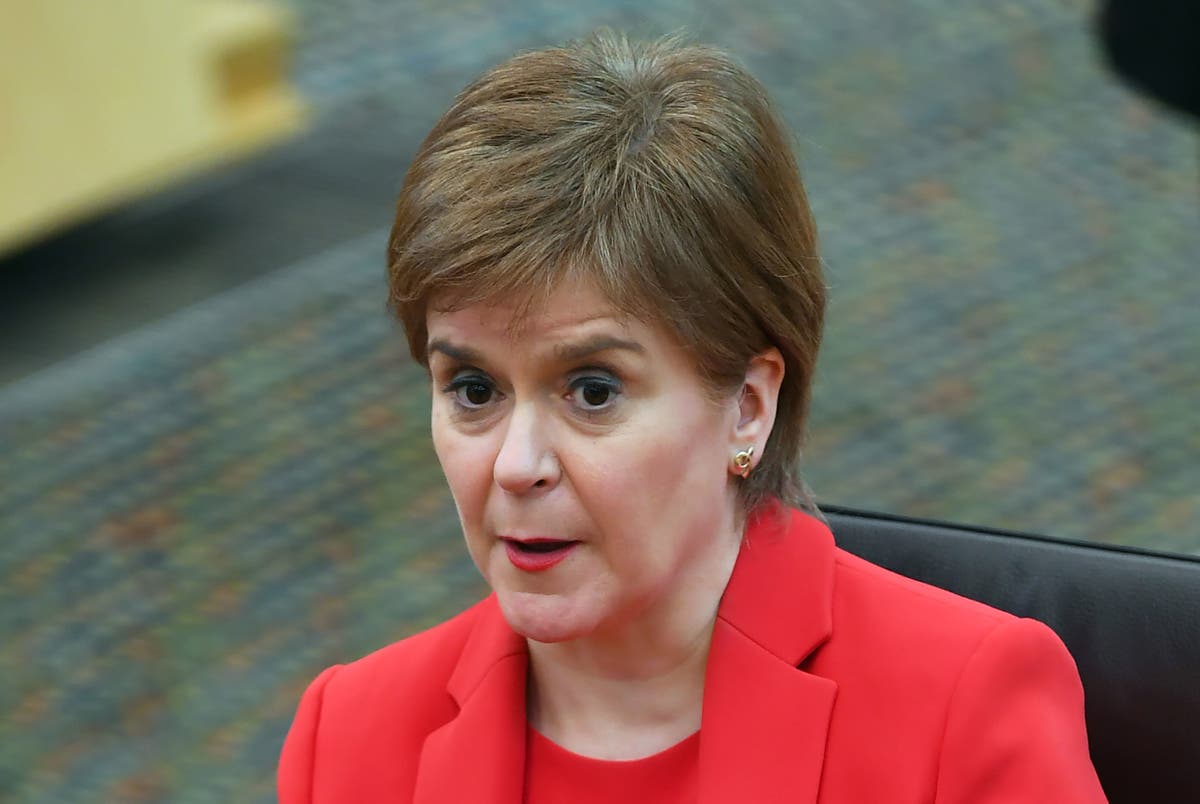 An independent inquiry into whether Nicola Sturgeon breached the ministerial code is to be released on Monday, reports suggest, four days after a leaked government committee report found she had lied.

The investigation by James Hamilton QC has been examining whether Scotland’s first minister misled parliament, as well as whether she should have recorded meetings with Alex Salmond.

Meanwhile, Boris Johnson has condemned scenes from a Bristol as “absolutely unacceptable” after violence broke out in the city during a protest against the government’s proposed policing bill. Twenty officers were injured in the demonstration, which saw a police station attacked and marked police cars set on fire.

A former Conservative Party leaded warned MPs they should “send a signal” to China, and “give hope” to victims of human rights abuses, by supporting a House of Lords amendment to the Trade Bill on Monday which would limit ministers’ ability to strike trade deals with countries committing acts such as genocide.

Sir Iain Duncan Smith joined the voices of senior Tories who have called for relations with China to be cooled, despite Mr Johnson’s integrated review of security, defence, development and post-Brexit foreign policy published last week calling for a “positive trade and investment relationship” with Beijing in the run-up to 2030.

Sturgeon to ‘face vote of no confidence on Tuesday’

Nicola Sturgeon is expected to face a vote of no confidence on Tuesday amid accusations she misled parliament about her involvement in the Alex Salmond investigation, the Scottish parliament has confirmed.

A debate on the motion of no confidence is now scheduled for Tuesday, rather than Wednesday as had been expected, although it is subject to final approval by the parliament’s business bureau on Tuesday morning.

The motion has been tabled by the Scottish Conservatives after the party’s leader at Holyrood, Ruth Davidson, claimed there was “no question” the first minister had lied to parliament.

The Tories had threatened the motion of no confidence prior to Ms Sturgeon’s appearance before the Committee on the Scottish Government Handling of Harassment Complaints, set up after a successful judicial review by Mr Salmond resulted in the Scottish Government’s investigation being ruled unlawful and “tainted by apparent bias” in 2019.

But following a leak that the inquiry has reportedly concluded that Ms Sturgeon gave an “inaccurate” account of meetings with Mr Salmond, the party repeated their calls for her resignation.

Another inquiry, carried out by the independent adviser to the government on the ministerial code, James Hamilton, has concluded and will be published on Monday.

Hartlepool candidate demands action on violence against women and girls

A Women’s Equality Party (WEP) candidate will run in the upcoming Hartlepool by-election “to demand action” from other parties to tackle violence against women and girls.

Gemma Evans, a campaigner and abuse survivor, will run for MP in the potentially vulnerable “red wall” seat, but will step down if Labour agrees to campaign for the same policy demands.

“We have seen the huge outpouring of grief and anger over the last few weeks, after the tragic murder of Sarah Everard,” she said. “We all know that her murder was not the first, and unless we take action it won’t be the last.”

Patel: ‘Tackling street harassment is vital to defeat violence against women and girls’

During questions given to home secretary Priti Patel, Labour’s Sarah Jones asked whether a law could be introduced in order to make street harassment a specific criminal offence.

She told MPs: “Thousands of women across the land, including (Ms Patel) have spoken of the danger they feel on the streets and the harassment they have suffered. Now is the time for action.

“The number of stalking and harassment offences recorded by police has more than doubled in four years, half a million offences last year and we know that this is literally the tip of the iceberg as most women do not report street harassment.

“Will (Ms Patel) work cross-party to introduce a law, similar to one introduced in France in 2018, to make street harassment a specific criminal offence?”

“So I am absolutely committed to working with everybody on this. This will be part of our strategy going forward on violence against women and girls. (Ms Jones) will absolutely know of the work that’s taking place.”

Nicola Sturgeon placed her future in James Hamilton’s hands when she appointed him to investigate her actions involving Alex Salmond, placing far more importance on it than a separate inquiry held by a committee of MSPs.

The document is set to be published “within hours,” according to reports.

Our deputy political editor Rob Merrick has the full report:

Pro-UK parties have hit out at Nicola Sturgeon for publishing draft legislation for a Scottish independence referendum during the ongoing pandemic.

Scottish Conservative leader, Douglas Ross, said: “It is beyond the comprehension of most Scots that Nicola Sturgeon considers this to be a priority.

“Scotland continues to be gripped by the global pandemic and even once normality slowly returns, the shockwaves will be felt for years to come.”

He insisted the motivation for publishing the draft bill was “as much to do with distracting people from the Sturgeon-Salmond scandal”.

Similarly, Scottish Liberal Democrat leader Willie Rennie said: “We are still in a pandemic. Thousands have lost their lives, thousands more have lost their job. Reasonable people will think that this is the wrong moment to be pushing a referendum.”

He added: “Dozens of civil servants could have been planning to get cancer services running full speed but they’ve been ordered to do this instead. Or they could have been working on getting funds to business, better mental health services or support for schools.”

Elsewhere, pro-independence Scottish Green Party welcomed the draft bill, with co-leader Lorna Slater saying in a statement: “Scotland’s future must be in the hands of those who live and work in Scotland, and the Scottish Greens are asking people to vote like our future depends on it this May.

“Our manifesto will support a referendum on our shared future, and polls show we may be crucial in ensuring this bill passes.”

Asked what the BBC’s unique selling point was, compared to its more technologically advanced competitors, the BBC’s Tim Davie answered simply: “High quality British content that you can trust”.

Mr Davie said the BBC has a “different purpose” to streaming services.

“We are absolutely coming from a different point of view,” he told the Public Affairs Committee. “We are not trying to make a paid subscription business work.”

He added: “We have a different purpose. I’m not running a business for profit, I’m running… an organisation for purpose.”

Tim Davie told a government committee on Monday he has a “healthy paranoia about [the] sustainability” of the BBC’s TV licence model.

Speaking to the Public Accounts Committee on Monday, the BBC’s director-general answered questions about how the publicly funded platform can stay relevant.

Concerns were raised about how the BBC could compete with ever-growing streaming platforms such as Netflix but Mr Davie seemed to suggest this was not something anyone should focus on.

“Our role here is not to beat Netflix, we’re not going to beat them. The goal is to do something different,” he said.

“What the BBC needs to do is be distinctive.”

Mr Davie added distinct features, such as locally made dramas and its bitesize education output, made the BBC “highly distinctive” to its streaming competitors.

Duke of Cambridge given new General Assembly role, No 10 says

The Duke of Cambridge has been appointed Lord High Commissioner to the General Assembly of the Church of Scotland for 2021, Downing Street has announced.

William was given the role in 2020 but the General Assembly was cancelled last May due to the coronavirus crisis.

The appointment – the sovereign’s personal representative to the Annual General Assembly – was approved by the Queen.

The government has acquired a second, brand new plane painted in the colours of the union flag to be used by Boris Johnson and other dignitaries for short-haul trips.

The government faced criticism last year when it emerged Boris Johnson’s primary plane, the RAF Voyager, had been repainted with the union flag at a cost to the UK taxpayer of £900,000.

A government spokesperson insisted the second aircraft, which it said had been repainted with a “Global Britain livery”, represents “value for money”. They declined to comment on the cost of the lease or new paintwork.

My colleague Tom Batchelor has this exclusive story: