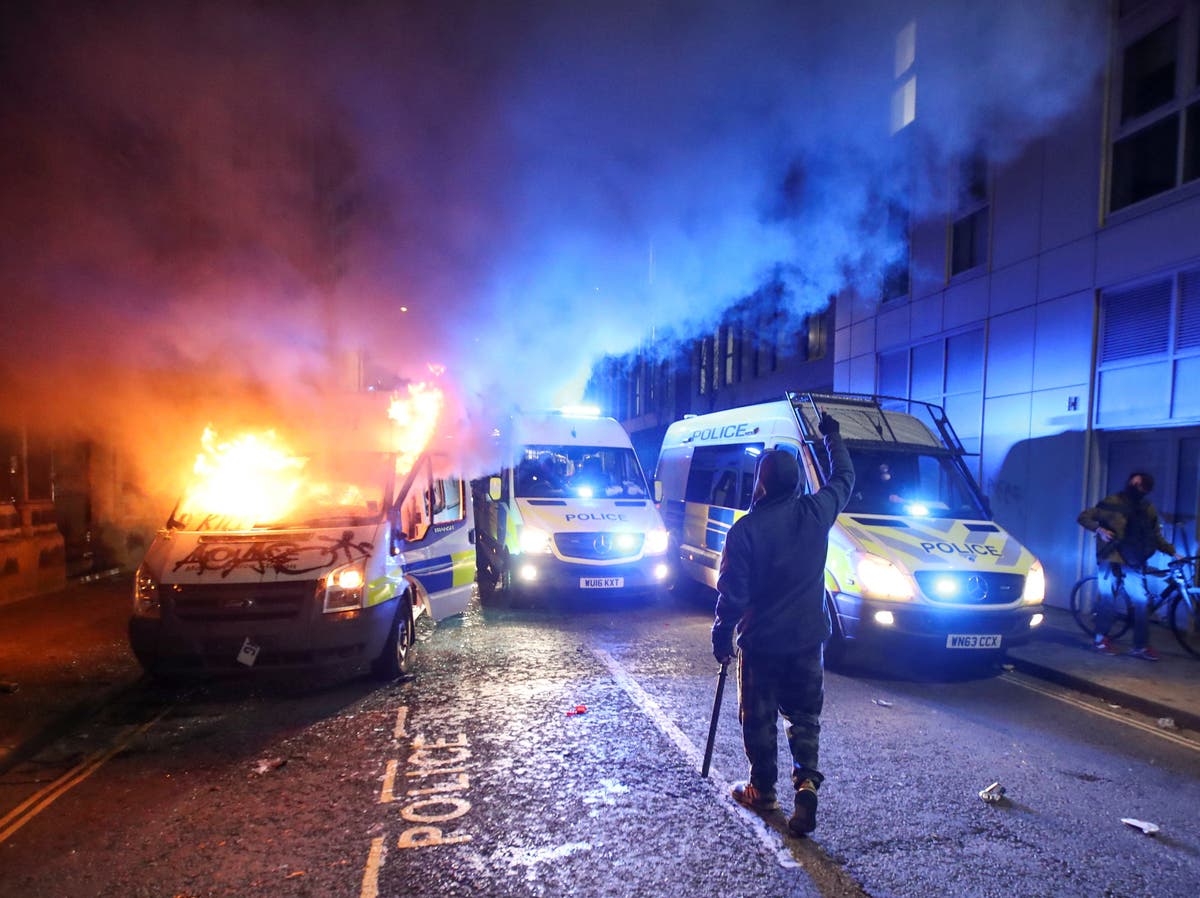 Seven people have been arrested after 20 officers were injured at a Bristol protest against the government’s proposed policing bill, which police claimed was “hijacked by extremists”.

“Many more” will be detained in the coming hours and days as officers examine a large amount of CCTV footage from Sunday night, said Avon and Somerset’s police and crime commissioner.

Thousands gathered across England over the weekend to oppose the legislation, labelled “draconian” by hundreds of legal scholars who fear the Police, Crime, Sentencing and Courts Bill amounts to “an alarming extension of state control over legal assembly”.

But a “small minority” of demonstrators in Bristol were roundly condemned after footage showed them attacking a police station, setting two police vehicles alight and damaging 10 more, and clashing with officers – two of whom were hospitalised, with broken bones and a punctured lung.

Avon and Somerset Police toldThe Independent on Monday that 18 other officers were left with injuries as a result, in scenes labelled by mayor Marvin Rees – a critic of the bill – as counterproductive and “selfish self-indulgence”.

While protesters were eventually met with riot gear, horses, dogs and batons, the force’s chief constable insisted that officers had been “incredibly patient” in policing the demonstration, which he claimed involved a “hardcore of serious criminals”.

“I believe the events of yesterday were hijacked by extremists, people who were determined to commit criminal damage, to generate very negative sentiment about policing and to assault our brave officers,” Andy Marsh said.

“Officers were very patient. From the initial gathering of around 2,000 to 3,000, which was more than we anticipated, there were about 50 officers engaging with those present and encouraging them to disperse. Many were complying in fairness.

“There was a hardcore of serious criminals hidden within those 3,000 people – perhaps 400 or 500 people – and we certainly didn’t trigger this.

“The officers were incredibly patient, incredibly professional and I pay tribute to them.”

While home secretary Priti Patel – to whom the proposed legislation will hand power to decide whether any given protest should be deemed “serious disruption”, and thus punishable by law – labelled the scenes “thuggery and disorder”, her sentiments were echoed by the city’s Labour mayor.

In a statement, Mayor Rees said: “I have major concerns about the bill myself, which is poorly thought out and could impose disproportionate controls on free expression and the right to peaceful protest.

“Smashing buildings in our city centre, vandalising vehicles, attacking our police will do nothing to lessen the likelihood of the bill going through.

“On the contrary, the lawlessness on show will be used as evidence and promote the need for the bill.”

He added that “those who decided to turn the protest into a physical confrontation and smash our city have robbed” Bristol of its peaceful record in a year rocked by protests.

The following morning, Mr Rees told BBC Radio 4’s Today programme: “I am from communities who are disproportionately likely to be on the receiving end of the criminal justice system and receive unfair treatment.

“What they have done has done nothing to make me and people like me, safer. This was selfish self-indulgence, self-centred, you know, violence.”

And Labour’s shadow home secretary Nick Thomas-Symonds added: “That violence which we saw last night, which was completely unacceptable, does absolutely nothing for the cause of those of us who are making perfectly legitimate arguments about concerns around the policing bill in the way that it seeks to limit protests.”

Police estimated that between 2,000 and 3,000 people gathered on Bristol’s College Green to oppose the bill, with many pictured wearing face masks and socially distancing, and Bristol Live reporting a “festival atmosphere”.

The demonstration outside the Bridewell Street police station initially began as a sit-down protest, with Chief Contable Marsh claiming that seated demonstrators were, “by the assessment of my team, looking for a trigger to provoke a violent response”.

He added: “By about 5.30pm it became clear that whatever we did, we wouldn’t be able to avoid a very violent confrontation.”

The force said of the arrests that six were for violent disorder and one for possession of an offensive weapon.

“A tactical decision was made to deal with these criminals retrospectively and not make a significant number of arrests last night, which would have impacted significantly on our resources at the scene and created a greater risk of damage to property and injuries to the reduced number of officers left to deal with the disorder,” Chief Constable Marsh said.

He said the force would now launch “one of the biggest appeals for wanted suspects that we’ve ever done”, adding that the cost of the investigation, of policing the march, and repairing the damage caused “will run into the millions”.

The bill – which critics warn would hand the government the power to clamp down on peaceful protests as it sees fit, including those deemed too noisy or a nuisance – passed its second reading in parliament last week.

0 0 0 0
Previous : Elon Musk says he is ‘accumulating resources to extend the light of consciousness to the stars’
Next : ‘I would go beyond calling anti-vaxxers conspiracy theorists to say they are an extremist group that pose a national security risk’ – Imran Ahmed the censorship extremist posing a security risk to national and global freedom – David Icke