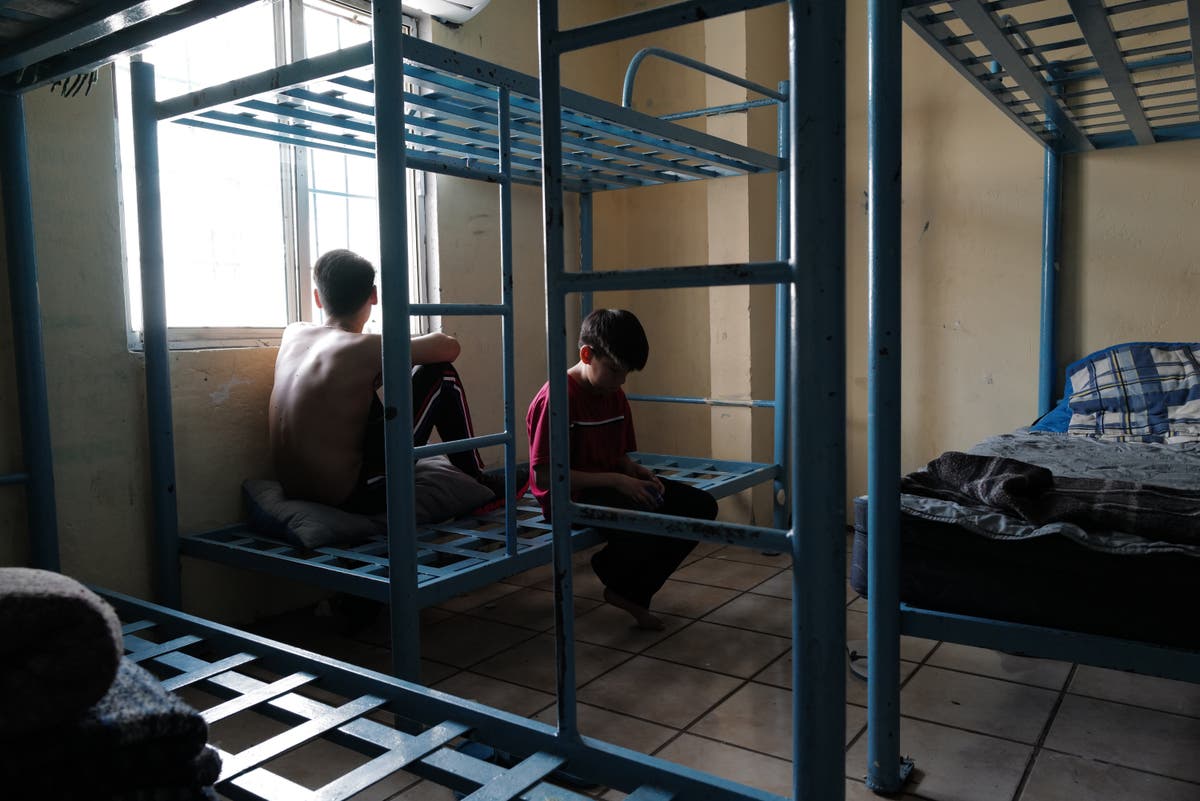 ‘You just feel stuck. Like, when is this going to end?’

icole, 15, and Joshua, 13, grew up with a photo of their mum in the living room and a promise that one day they would see her again.

Their mother left El Salvador for Maryland when they were toddlers, unsure how long she would stay, certain only that she had to leave if she were ever to pry her family out of poverty. Twelve years later, she had saved enough money – the smuggler charged more than £10,000 – for her kids to travel north.

On 14 December, a few yards south of the US border on an international bridge where the smuggler had left them, Mexican police stopped the pair.

“I begged them, ‘Please, please let us pass,’” Nicole said through tears. “But instead they brought us here.”

Until then, Nicole and Joshua – who gave only their first names for fear they could be identified if returned to El Salvador – had thought of their own journey as a two-person exodus, not part of a flow, a surge or a crisis. They are now among more than 700 children who have wound up at the Centre for Attention to Border Minors in Reynosa, just south of McAllen, Texas, since December. Nearly all of those unaccompanied children were detained by Mexican soldiers or police before they could present themselves to US immigration agents.

While president Joe Biden has promised to respond humanely to the growing number of children arriving at the US border, both with and without adults, Mexican authorities have continued to act as an arm of US immigration enforcement, as they did under president Donald Trump. To what degree that partnership should continue is one of many questions Biden will have to answer as more children arrive here.

The Biden administration has told would-be migrants to wait in their countries of origin, saying it is not yet ready to receive them at the border. But it has not specified how long that wait will be or what will become of those whose journeys – like Nicole and Joshua’s – began before Biden took office.

Some children have been at this tiny complex in the centre of a restive border city for more than a year. Others arrived just days ago. Several bear scars from beatings or torture at the hands of gangs and cartels. They sleep together in a dormitory with barred windows, the door staffed by an unarmed guard who tries to chase down would-be escapees.

“They get desperate waiting here so long, trapped inside,” says Gabriela Zunega Soberon, the director of the government-run shelter. “In many cases, we see the same kids over and over. They are caught and deported and then caught again.”

When they got here, Nicole and Joshua met children fleeing a range of crises in central America: gang violence, displacement in the wake of two major hurricanes, poverty deepened by the coronavirus pandemic. They’ve watched as more arrive every day or two.

Leslie, 13, was stopped by Mexican police at the border a few weeks after fleeing El Salvador, where she said gang members had threatened to sexually abuse her. Luis, 16, from Honduras, was caught at a checkpoint last week on the highway south of the city.

Mauricio, 17, and his brother Carlos, 15, were among the few who made it across the border. But they were promptly expelled by US Border Patrol agents, as US law permits because they are Mexican.

Now, the children here debate whether it’s better to return home and begin the journey to the US anew, apply for asylum in Mexico or try to find a lawyer who can help get them escorted across the border to Texas. Their stories paint a broad picture of why thousands like them have arrived at the US border so far this year.

But Mexican police boarded the commercial bus he was on as it entered Reynosa. They asked for documentation that Luis didn’t have. He is now at the child welfare centre, waiting to be deported, so he can try again to migrate. When his family paid a smuggler to take him to the border, they bought three chances. He has two left.

If Luis had made it to the US border, he would probably have been released to his uncle in New York and been able to apply for asylum or another form of protection. Nicole and Joshua knew that path was open to them, too. They left El Salvador in December, unaware that a new president was about to take office in Washington but hopeful they would be allowed to reunite with their mother.

Cases like theirs – children travelling to the US to join a parent – are the most common at the shelter, Soberon says. The children are allowed to call their parents in the US on Mondays and Fridays. They attend Spanish and math classes in a room with inspirational buzzwords printed on the wall: peace, responsibility, loyalty.

As for those who do make it across the US border, advocates have pressured the government to release them to relatives as quickly as possible. Because of the surge in arrivals, children now spend 108 hours on average in Border Patrol custody before being transferred to shelters run by the Department of Health and Human Services, where they usually spend a few more days before being released to family members.

Central American children at the centre in Reynosa spend a month on average waiting for paperwork and the intervention of their consulates. Those who decide to seek protection in Mexico often find themselves caught up in a seemingly endless bureaucratic procedure.

Nicole and Joshua have been waiting nearly four months, Leslie for 13. She has left the complex only once to fill out paperwork in a government office.

“You just feel stuck,” she says. “Like, when is this going to end?”

Mexico ramped up its apprehension of US-bound migrants in response to Trump’s threats of tariffs in 2019, but that vigilance continues. The country has defended those operations, saying it is also enforcing its own immigration laws, even as it detains child asylum seekers inches from the US border.

This month, the Biden administration said it would reinstate the Central American Minors programme, which aims to reunite children in El Salvador, Guatemala and Honduras with parents who legally reside in the US, eliminating the need for the dangerous journey north. But many of the children now en route to the US plan to reunite with parents and relatives who are undocumented immigrants.

A few miles from the child welfare centre, on the Mexican side of the international bridge that connects McAllen and Reynosa, dozens of children from Honduras, Guatemala and El Salvador were sleeping on the ground.

US authorities had sent them back to Reynosa after they crossed the border, but because they were with their parents, Mexican officials didn’t take them to the shelter. Instead, the families were deposited by the bridge, in an area patrolled by organised crime groups.

“We’ve been sleeping outside for three nights,” says Edwin, from Alta Verapaz, Guatemala, who sat with his eight-year-old son.

They had been expelled from the US under a Trump administration policy – extended under Biden – that closed the border to most asylum seekers during the pandemic. They had heard that some unaccompanied children and families with babies have been admitted into the US.

But for them, like the children detained at the centre, not much seems to have changed under a new US president.