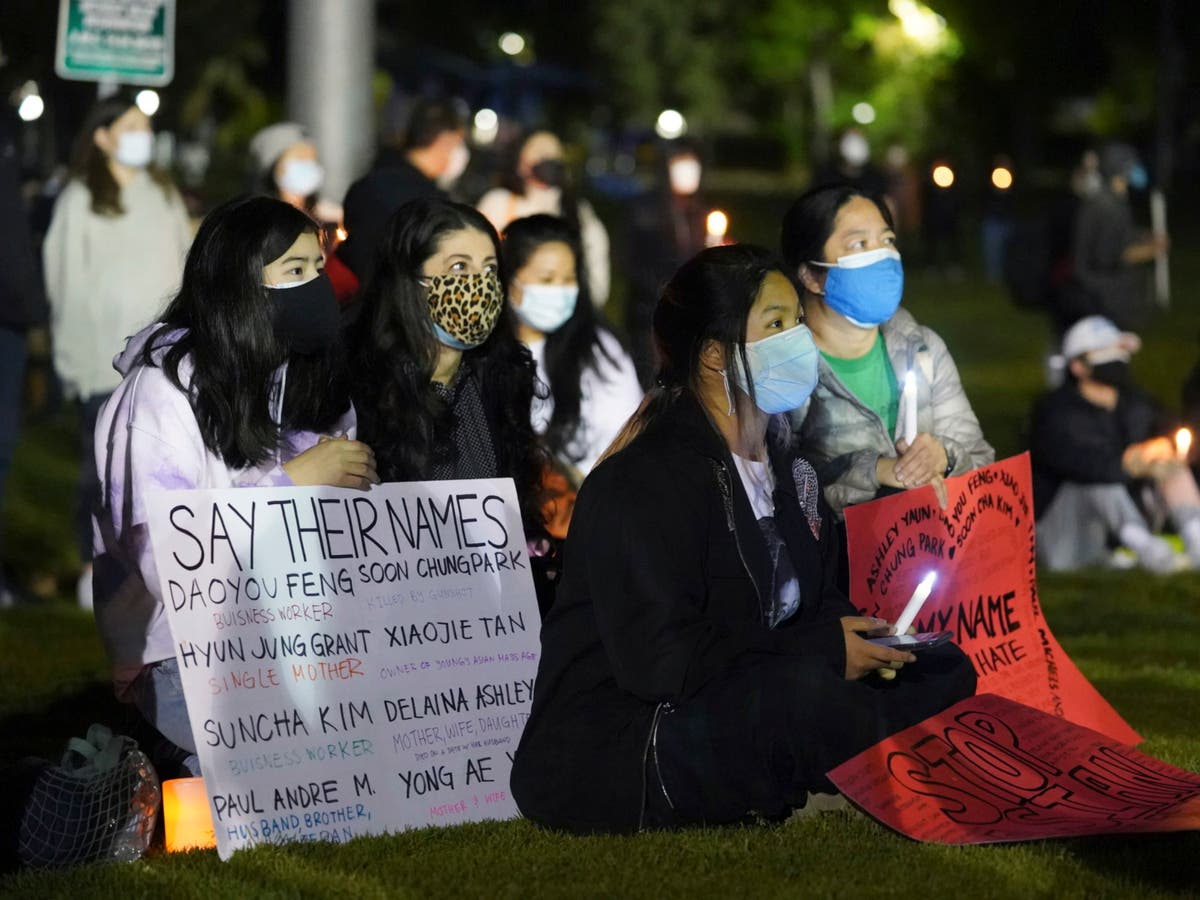 Rallies in support of Asian Americans staged across United States

Getting the gun was as simple as going to a local sporting goods store. Passing the background check took a matter of minutes.

Then it was a short drive to Young’s Asian Massage, where surveillance video obtained by The Washington Post shows a suspect spent more than an hour before opening fire.

Within hours of purchasing a handgun on Tuesday, police allege Robert Aaron Long, a White man, had shot and killed eight people – six of them of Asian descent and all but one of them women.

In Atlanta, Senator Raphael Warnock, issued a call for solidarity: “To my Asian sisters and brothers,” he said, “we see you. And, more importantly, we are going to stand with you.”

Meanwhile, a growing chorus of advocates has called for a renewed federal effort to fight gun violence, arguing that, amid rising racism, lax gun laws make it too easy for someone to act on their hate.

Yet activists say the attacks fit a pattern of racism and misogyny directed at Asian American women, as well as a broader trend of hate-fueled gun violence.

“Time and time again you’ve seen some of the most vulnerable communities in this country threatened by this lethal nexus of hatred and unregulated access to firearms,” said Peter Ambler, executive director of the gun control advocacy group launched by former congresswoman Gabby Giffords.

He listed the targets of recent mass shootings motivated by prejudice: Latinos at a Walmart in El Paso, Texas. A synagogue in Pittsburgh. A gay night club in Orlando, Florida. A Black church in Charleston. A Sikh temple in Wisconsin.

“A complex matrix of inadequacy and failure” enables these crimes and foments the hatred that fuels them, Mr Ambler said. “This isn’t tolerable any more.”

Georgia has some of the country’s loosest gun laws. There is no waiting period for firearm purchases, a policy adopted by 10 states and the District of Columbia. Like most states, it does not bar people convicted of a hate crime from buying a weapon.

In Georgia, State Senator Michelle Au, a Democrat, has proposed a bill that would close the loophole for background checks to include private gun sales and transfers, but has not been able to get a hearing in committee, she tweeted.

In a private meeting with Joe Biden and Kamala Harris on Friday, Senator Au said she also raised the need for universal background check legislation.

Georgia State Representative Sam Park, a Democrat and the state’s only Korean American legislator, expressed outrage on Saturday that many of his constituents waited in line to vote for longer than it took Tuesday’s massacre to unfold.

Bee Nguyen, another Georgia state representative, tweeted: “It wasn’t a bad day. It was a brutal and violent crime in which racism, misogyny, gender-based violence, and lax gun laws intersect.”

More than a year into a global pandemic that has sparked record gun sales as well as racist rhetoric and attacks against Asians in the United States, lawmakers are now debating the best way to stem future violence.

Representative Grace Meng, and Senator Mazie Hirono, D-Hawaii, have introduced a bill that would require the Justice Department to appoint an official to review all pandemic-related incidents that are reported to federal or local officials.

But previous legislative attempts to bolster hate-crime tracking have been blocked by Republicans, who have said existing laws are adequate to punish crimes.

The House of Representatives passed legislation this month that would require background checks for all gun buyers and give law enforcement agencies more time to inspect people who are flagged by the check system.

This would close the “Charleston loophole”, which enabled a White supremacist to buy the weapon used to kill nine Black people at Mother Emanuel AME church in that city.

The bills face an uphill battle in the Senate, where they are unlikely to receive the 60 votes needed to overcome a filibuster.

Those rules would not necessarily have prevented the shooting in Atlanta. A lawyer for Big Woods Goods – the store where the suspect is alleged to have purchased his gun – said there was no indication of “anything improper” in the transfer of the weapon. The store is cooperating with law enforcement.

Experts have found that active shooters typically purchased their guns legally, including, in many cases, buying them specifically to carry out the attacks.

At the demonstrations on Saturday, protesters voiced a desire to turn grief into action.

“We have a tendency to internalize our struggle,” said Jennifer Chan, 27, one of the three women who co-organized the event in Chicago.

She invoked the colloquial Chinese expression of “eating bitterness” – the notion of virtuously enduring hardship.

Ms Chan said she was surprised not only by the turnout at the rally – which drew an estimated 250 people – but by its diversity.

She underscored the importance of building solidarity not only with other racial groups but within the broad and diverse ranks of the Asian diaspora.

She spoke of traditional rivalry between groups like Koreans, Chinese and Japanese, or how the American experience varies among Southeast Asians and South Asians, or immigrant Asians compared to ones who are American-born.

Tracy Wang, who attended the protest with several of her relatives, including her older sister, said she felt a sting of familiarity during the past week as the discourse turned to the twin threats of sexualized and radicalised violence that Asian women so often face.

She said she endured name-calling and sexual harassment as a law student in rural Ohio decades ago but that Asian women in the United States are still “disrespected” and stereotyped as hypersexual yet submissive.

“We’re going to break that image,” Ms Wang said, who plans to attend a second rally set for Chicago’s Chinatown next week. “As a woman, as an Asian, we can’t stay silent anymore.”