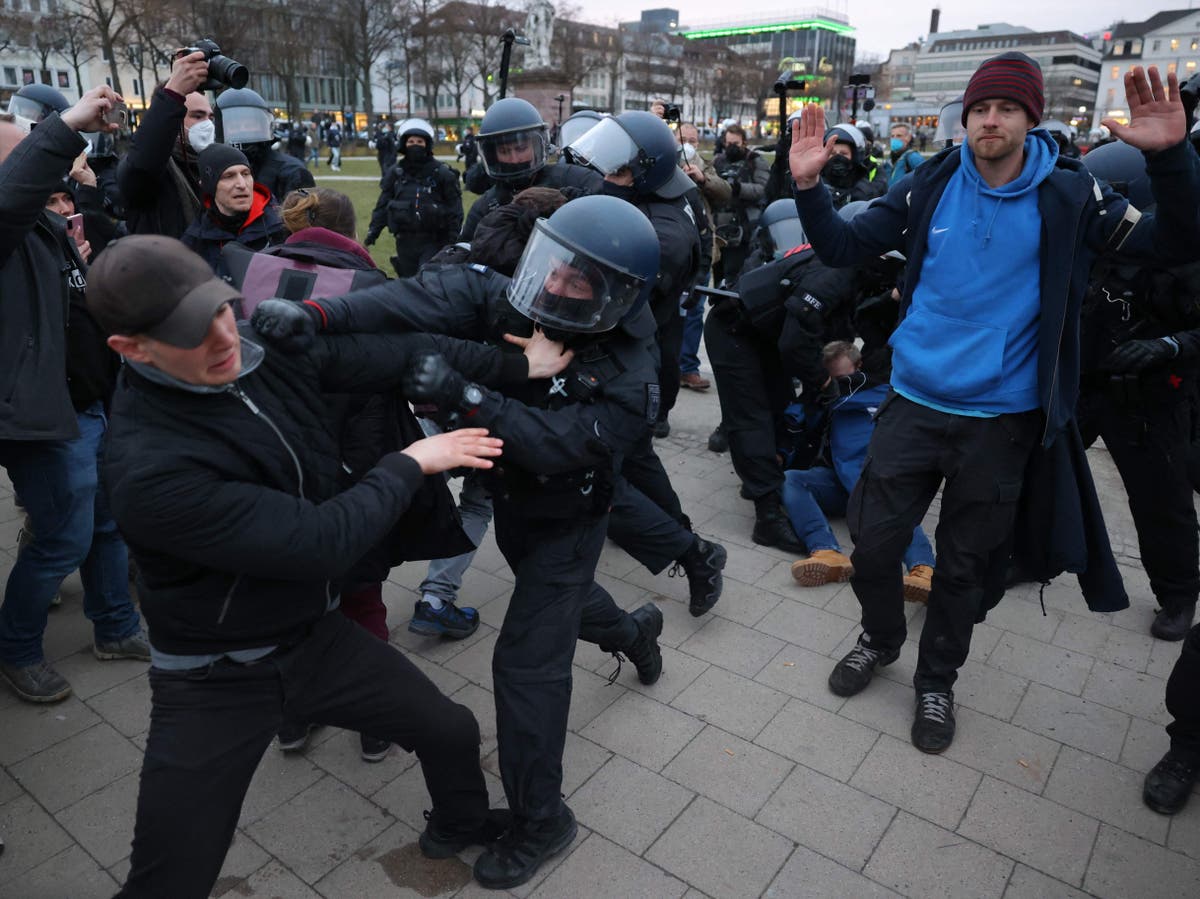 Protesters clash with police as 20,000 attend anti-lockdown rally in Germany

More than 20,000 people from all over the country converged on the city of Kassel for the march organised by the online conspiracy movement Querdenker, or Lateral Thinkers.

It came after Chancellor Angela Merkel said Germany would have to apply an “emergency brake” and reverse some recent relaxations of restrictions because of a surge in coronavirus cases.

Protesters carrying placards bearing slogans such as “No compulsory vaccination” faced counter-protesters wearing face masks, one of whom held up a placard reading “Vaccinated”.

Police said that bottles and umbrellas were thrown at officers deployed at barriers set up to protect public buildings and separate rival groups.

“There was a very dynamic and confusing situation in which larger groups of people tried to violently break through police barriers,” the headquarters in North Hesse said in a statement.

“By using the baton, pepper spray and the water cannon, larger groups could ultimately be prevented from breaking through.”

The police said that they were able to disperse the protesters with no serious injuries being reported as of 9pm local time, by which time the protest had dispersed and the tram lines had restarted.

Several arrests were made for resisting law enforcement officers and breaching the peace.

Police were also on standby for possible riots in Berlin after far-right opponents of government regulations called for protests in cities across the country. In the event only about 500 people assembled at the Brandenburg Gate landmark, far less than the assembled 1,800 officers and 1,000 counter-protesters.

Germany’s national and regional leaders are due to meet on Monday to consider the next steps for the four-month-long national lockdown, but many politicans have said it is too early to ease restrictions.

The national disease control agency, the Robert Koch Institute, said new infections were growing exponentially as the more-infectious UK variant becomes dominant in the country. A further 16,033 new cases and 207 additional deaths were reported on Saturday, bringing the overall death toll to 74,565.

Anti-lockdown protests also took place in several other countries across Europe, including the UK, Ireland, Austria, Finland, Romania and Switzerland.

0 0 0 0
Previous : Man claims responsibility for 16 killings after being arrested for murder in New Jersey
Next : New Document Exposes How This Company Tracks Car Locations In Real-Time Almost Anywhere In The World – David Icke