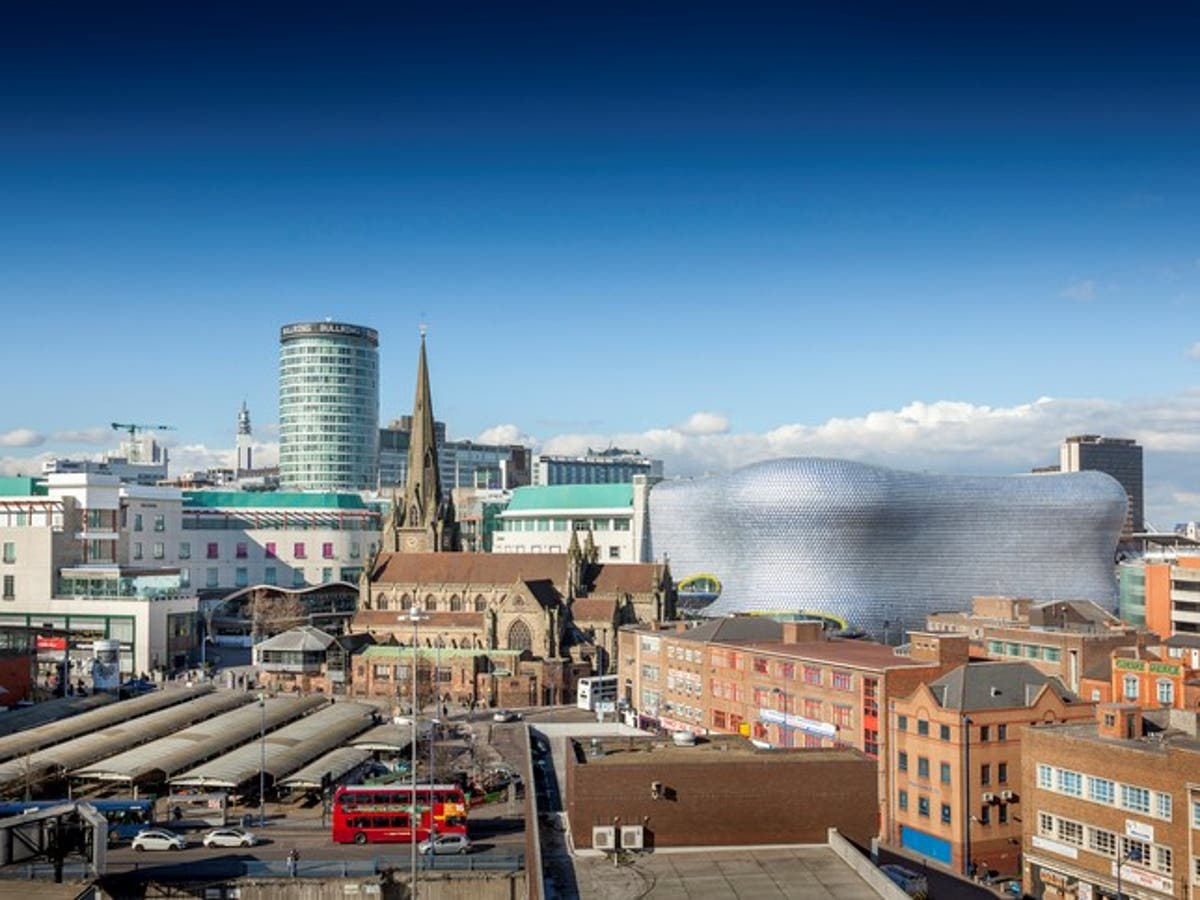 A city on the brink? Birmingham facing ‘disaster’ as unemployment hits levels not seen since Eighties

It was on the very first day that Sarah Ventre cried.

Last October, the 32-year-old was one of a half dozen professional caterers who, concerned by rising unemployment in the Northfield area of Birmingham, set up a food bank at the local Baptist church.

The group has since grown to deliver 700 hot meals every Thursday to families facing severe hardship as a result of the coronavirus pandemic.

But on that first day, as she took calls from residents asking for assistance, the mother-of-one could not stop herself breaking down.

“It was the third call, someone who had found themselves out of work and they were trying to justify needing help,” she remembers today. “They were saying they’d never asked for anything before but they’d been made redundant in summer and just having a hot meal would help them through the week. And in the background, I could just hear a child asking if we’d said yes. They were saying how hungry they were.”

If the story is heart-breaking, it is, it seems, far from unique.

Rather, Ms Ventre and her food bank are on the front line of a major crisis now quietly engulfing England’s second biggest city.

Some 33,000 people have lost their jobs in Birmingham since February last year. About 15 per cent of the population here is currently unemployed. That’s almost treble the national average. It is the highest rates the city has known since 1987. If you were to rank every UK parliamentary constituency by order of the most people claiming universal credit, five of the top 10 would be in Birmingham.

There is almost certainly worse to come too. Another 55,000 people here are currently on furlough. When the government’s Jobs Retention Scheme ends in September, officials are already bracing themselves for a further explosion in redundancies.

In a city where 40 per cent of the population were already living in the 10 per cent most deprived areas of England, the figures are, some say, nothing short of an economic and social calamity in motion.

“We are not on the brink of a disaster anymore,” says Helen Sephton, managing director of homeless prevention charity The Project, also based in Northfield. “The disaster is already happening. And if we don’t address it, what comes next is a homelessness crisis, families falling into debt, an explosion of mental health issues and ever widening inequalities.”

She herself points out that when the city’s famed Longbridge car plant closed in 2005, it was widely considered catastrophic for the entire region. Some 6,500 jobs were lost overnight. Yet, during the last year, redundancy rates have been the equivalent of a Longbridge closure every two months.

“We are now starting to see people at the Project who have never been in this situation before, never even been on benefits,” says Sephton. “But now they’ve suddenly found themselves without any income and they don’t know where to turn.”

Birmingham is not the only place suffering, of course. Some 1.74 million people across the UK are currently unemployed according to the Office for National Statistics. It is the highest such figure in half a decade, and widely expected to keep climbing.

Yet there is little doubt the West Midlands giant has been savaged to an extent that other areas simply have not.

Partially, experts say, this is because the very sectors that have powered the city’s economy since the Eighties have been those that have been hit hardest by Covid-19.

Birmingham’s transformation over the last three decades into a major centre of retail, hospitality, higher education and corporate tourism means it has been disproportionately vulnerable to the virus and the resulting lockdown. A third of companies here have either been forced to close some of the time or permanently. Even with furlough, staff have been laid off in huge numbers.

“The city centre, in particular, is driven by these sectors,” says Rebecca Reid, director at the University of Birmingham’s City Region Economic and Development Institute. “Once those businesses close, whether that’s on a temporary or permanent basis, it is inevitable that gets reflected in unemployment figures.”

Corporate and business conferences alone bring hundreds of thousands of people to Birmingham every year: “with that sector shut down the knock-on impact is felt right across the city and the wider region,” says Riley.

Yet the problem goes deeper than this.

In many ways, the virus has merely exacerbated deep-seated, structural issues that have long gone unaddressed – or, at least, unsolved – here.

If the city has, by some measures, been an economic success story in recent years – there was record levels of both employment and direct investment before the virus hit – huge inequalities have remained. In areas such as Ladywood and Washwood Heath, endemic health issues and poor educational attainment – neither helped by a decade of austerity – have seen residents fall further behind. The virus has only compounded this inequality.

“If you take East Birmingham as an example, there are actually significant employment opportunities around that area – you have big growth in the city centre, the airport, the National Exhibition Centre, Jaguar Land Rover,” says Ian MacLeod, acting director of inclusive growth with Birmingham City Council. “But there’s still this big area in the middle of all that where you still have high rates of unemployment.”

Why? “Because you have issues with health and access to education and skills that prevent people getting into long-term sustainable jobs. You put a pandemic on top of that and it is a massive challenge.”

Building a factory (by way of example) in such an area might help create jobs, he reckons. But it will not solve generational unemployment: “for that we need a whole systemic, long term approach to improve health outcomes and skills – it is not an overnight job.”

For now, the growing fear is that, as unemployment accelerates, so too will all those related social ills: mental health problems, debt, alcohol abuse, physical decline, domestic violence, family separations, homelessness and reduced educational attainment among them.

For mother-of-three Sophie Philips, none of this is theory. She is living it.

In August last year, after four months on furlough, the 34-year-old was made redundant from her job with a domestic abuse charity.

Since then she has applied for dozens of roles without success. Despite having a first-class degree and a ferocious desire to work, she has not been offered a single interview. Lidl and Asda have been among companies to reject her applications.

She and the little ones – aged just four, three and two – have survived by cutting all non-essential spending and turning to food banks for the first time in their lives.

“We’re surviving day to day really,” she says. “And it just feels hopeless. You do get down.When I was on furlough I was using my time to fix the house up and all sorts of thing and I know I should be using my time better now but you feel so drained when you’re not working.”

One thing in particular has caused her anguish. As the good weather comes, her little ones have started talking of their annual day at the seaside, taken with a local children’s centre.

“And I know they’ll want ice cream and donkey rides but, for three of them, that’s our weekly food budget,” she says. “How can I afford it? All I keep thinking is what kind of mum can’t give her children an ice cream?”

For Andy Street, mayor of the West Midlands Combined Authority, it is the kind of question he says makes him determined to get the city moving again.

He himself grew up in the Northfield area and appears in no denial about the situation Birmingham finds itself in, although when The Independent invites him to admit it is in crisis, he declines. “I’ll keep with my own words,” he former John Lewis boss says. “It’s a massive challenge. We don’t know for certain but it looks as though we have been the worst effected region in the country. We’ve had an incredible sideswipe from this…we have had a torrid time.”

His authority has now published a plan – part economic blue print, part elongated election leaflet– that promises to create 100,000 jobs in two years. Detail is light but the proposals essentially envisage using private and public investment to drive growth: HS2, the 2022 Commonwealth Games, new transport links and growing green technology can all be harnessed to boost job numbers, it says.

Critics say the numbers produced have the feel of being pulled out of thin air.

Liam Byrne, the Labour candidate to be mayor of West Midlands, declined to speak to The Independent for this piece but he has previously said Westminster needs to send more money ton the region. Speaking about chancellor Rishi Sunak’s budget earlier this month, he declared there was a “hole [in it] called the West Midlands”.

On the front line, meanwhile, there is also concern that little is being done to support those already struggling to make end’s meet.

Back with Helen Sephton, managing director of The Project, she says that job creation is much needed but that, for many people, help is needed right now in simply surviving while out of work.

“In Birmingham, we have got some amazing ground level voluntary organisations and charities, and they have basically jumped into action during the pandemic,” she says. “Food banks have been feeding children, charities have been helping manage debt or trying to help people get access to laptops and internet so they can apply for jobs or benefits.

“But that help on the ground cannot just carry on without proper support or funding. We need people in power to understand the seriousness of what is happening here – how desperate the situation is becoming – and we need them to help build services fit for dealing with it all.”

0 0 0 0
Previous : Talking history: How some Turks and Armenians are seeking to overcome years of conflict
Next : Zoom increased profits by 4000 per cent during pandemic but paid no income tax, report says