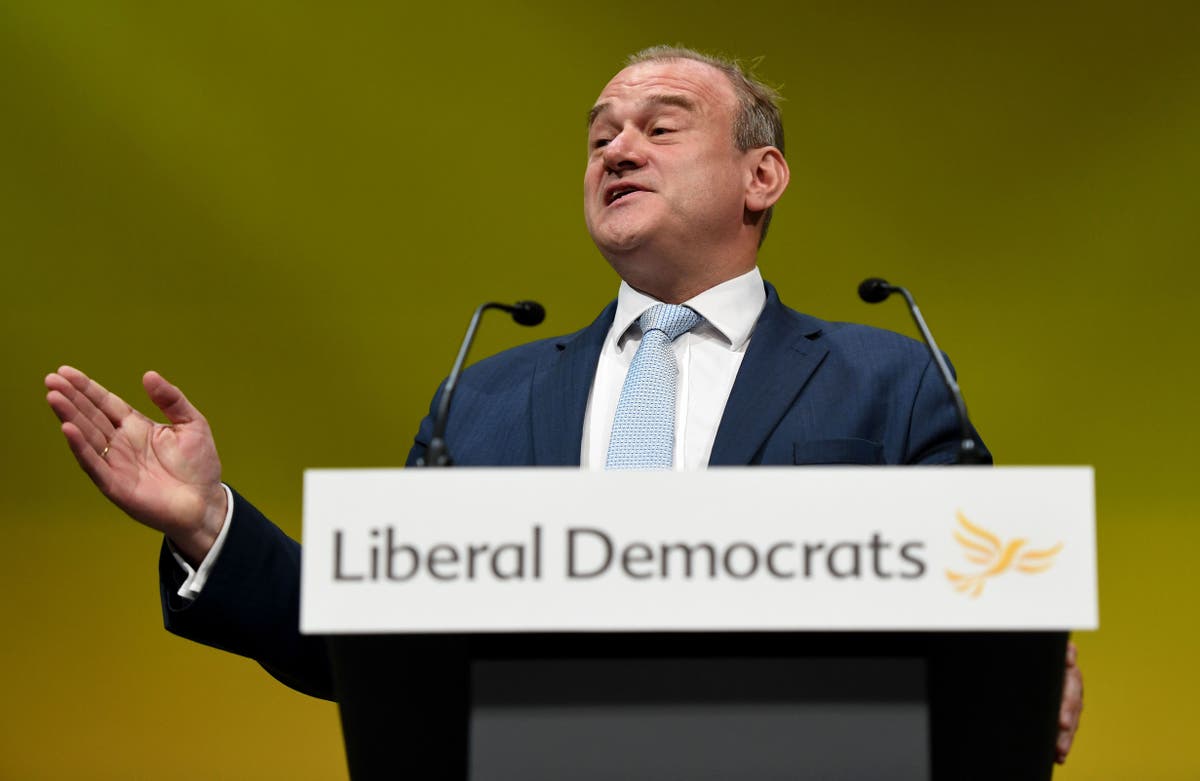 The billions of pounds being raised by green energy auctions should be used to set up a sovereign wealth fund and invested across the UK, Ed Davey will say on Monday.

In his speech to the Liberal Democrat spring conference the party leader will attempt to reignite his party’s fortunes with a series of eye-catching policy ideas.

Pointing to the £9bn raised from a recent seabed licence auction last month, Sir Ed will argue the money should be ploughed into green projects to get Britain ready for net zero greenhouse gas emissions.

He says the plans would be used to create manufacturing jobs and fund a ten-year programme to insulate every home, cutting energy bills and usage.

“Just last month, an auction for the right to build windfarms off the coast of England and Wales attracted bids far, far higher than anyone expected – raising £9bn, with more to come,” he will tell his party at the gathering, which is being held online this year because of Covid-19.

“This green wealth doesn’t belong to Rishi Sunak, or the Tories. It belongs to the British people. So I say: let’s invest it in a sovereign green wealth fund.

“Let’s invest the windfall from wind power into more climate action. To build new infrastructure and attract more private investment. To grow our green wealth even further, and create thousands of manufacturing jobs here in the UK.

“By investing in the green technologies and industries of the future – tidal power, hydrogen, green flight – Britain can not only recover but become the world’s first green powerhouse.

“And with our new green wealth fund, we can also invest in an emergency ten-year programme to insulate every single home.

Sir Ed will accuse the Tories of instead slipping “the cash quietly into the chancellor wallet”, emulating Margaret Thatcher’s approach to North Sea oil.

“If the Tories had invested the windfall from North Sea oil in the Eighties, they could have created a wealth fund worth more than £500bn today,” he will add.

“But they squandered the nation’s wealth then, just as they are doing now.”

Other policy plans in the speech include tax cuts for small businesses, such as quadrupling the employment allowance for national insurance contributions (NICs) from £4,000 to £16,000.

This would mean no small business paid a penny in NICs on their first five employees, he will say.

Sir Ed will also call on Mr Johnson to give NHS staff a pay rise, and admonish the Tories for scrapping green energy projects.

The Lib Dems have faced a political rollercoaster in recent years, capitalising on their staunch opposition to Brexit at the 2019 European Parliament elections but struggling at the same year’s general election.

The party has struggled to be heard through the noise of pandemic, however.