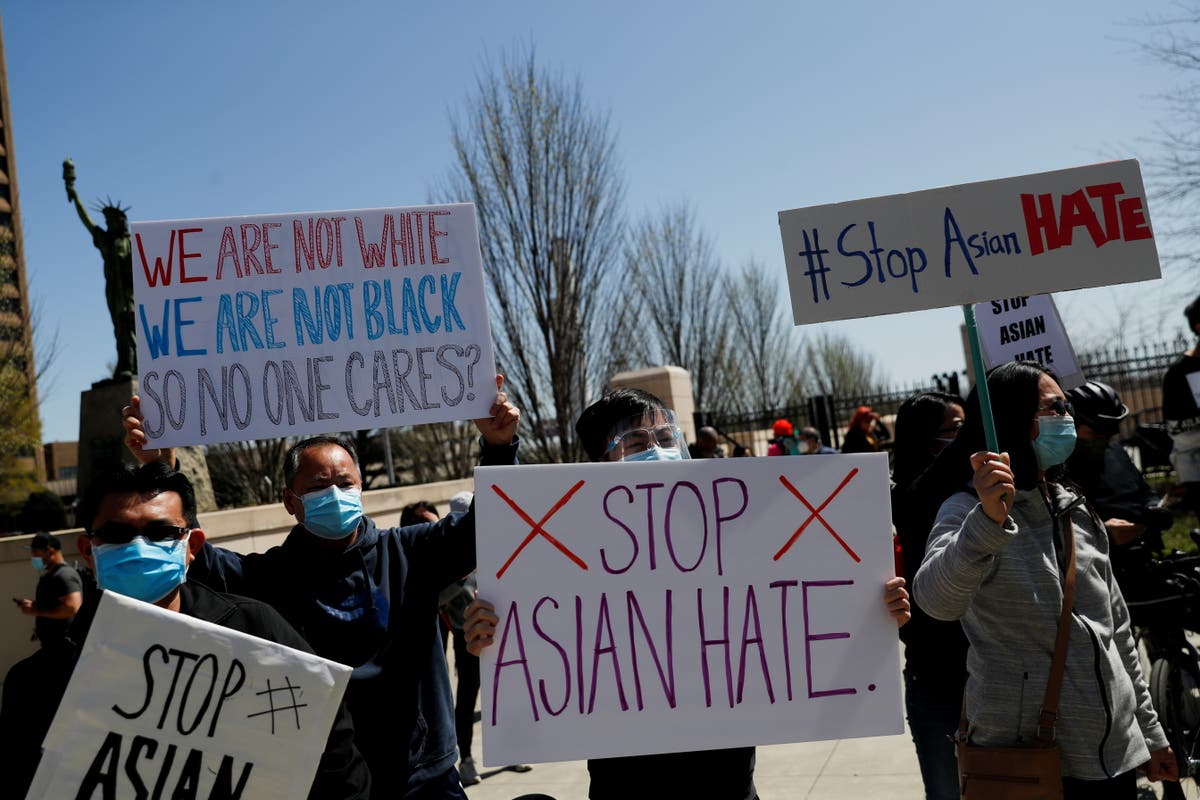 ‘Deep rage and grief and sorrow’: Georgia rallies against anti-Asian hate as US mourns Atlanta victims

From Seattle to New York City, the nation’s eyes have turned to Atlanta, Georgia to mourn with and uplift a community and the families rocked by the killing of six Asian American women in a shooting spree that has galvanised both activists and the White House to address a tide of anti-Asian racism and discrimination in the US.

Following a week of rallies and vigils across the country, an emotional hearing in Congress, and remarks to the nation from Atlanta delivered by Joe Biden and Kamala Harris, hundreds of people gathered for a “Stop Asian Hate” rally steps away from Georgia’s State Capitol building on 20 March.

Bee Nguyen, the first Vietnamese American elected to Georgia’s House of Representatives, said that the victims had “no one in their community to watch their back, and we are left with deep rage and grief and sorrow.”

“We stand in solidarity with our Asian sisters and brothers,” said Georgia Senator Raphael Warnock, who appeared with Senator Jon Ossoff. “We acknowledge your humanity.”

As law enforcement reveals details about the shootings at three Atlanta-area spas and the suspect, Robert Aaron Long, the nation is learning more about the six women killed on 17 March:

In a GoFundMe campaign for the family of Ms Kim said “she was pure hearted and the most selfless woman I knew.”

“A single mother who dedicated her whole life to providing for my brother and I,” wrote Randy Park, in memory of Ms Grant.

Mr Long, who is white, has been charged with multiple counts of murder and one count of assault.

Police in Georgia have not described the killings as a hate crime, despite growing appeals from lawmakers and Asian Americans witnessing violence and systemic racism in their communities for years.

According to investigators, Mr Long targeted the spas in an attempt to purge his “sexual addiction” – a case that advocates say has enmeshed violent misogyny with racist tropes of sexualising Asian women. Rep Nguyen said the shootings arrived at the “intersection of gender-based violence, misogyny and xenophobia.”

The group said it received at least 3,795 complaints since it began tracking abuse against Asian Americans and Pacific Islanders since last year.

Manjusha Kulkarni, co-founder of Stop AAPI Hate, told members of Congress that the data shows that none are isolated incidents, but happening in every state in the US.

“Our community is bleeding,”said US Rep Grace Meng. “We are in pain, and for the last year, we’ve been screaming out for help.”

Democratic congresswoman Doris Matsui said anti-Asian rhetoric has been amplified at the “highest levels of government” over the last year, as former president Donald Trump and his allies have invoked “racist slurs like ‘China virus’ to spread xenophobia and cast blame in innocent communities” for the coronavirus pandemic.

Judy Chu, the chair of the Congressional Asian Pacific American Caucus and the first Chinese American woman to serve in Congress, said that the alleged killer’s “targets were no accident.”

“What we know is that this day was coming,” she said.

She urged her caucus and the committee to hold the hearing “because the Asian American community has reached a crisis point that cannot be ignored,” she said.

Ms Chu called for a “national day to speak out against Asian hate” on 26 March.

Lawmakers have also proposed legislation to create a new role inside the US Department of Justice to review Covid-19 related hate crimes.