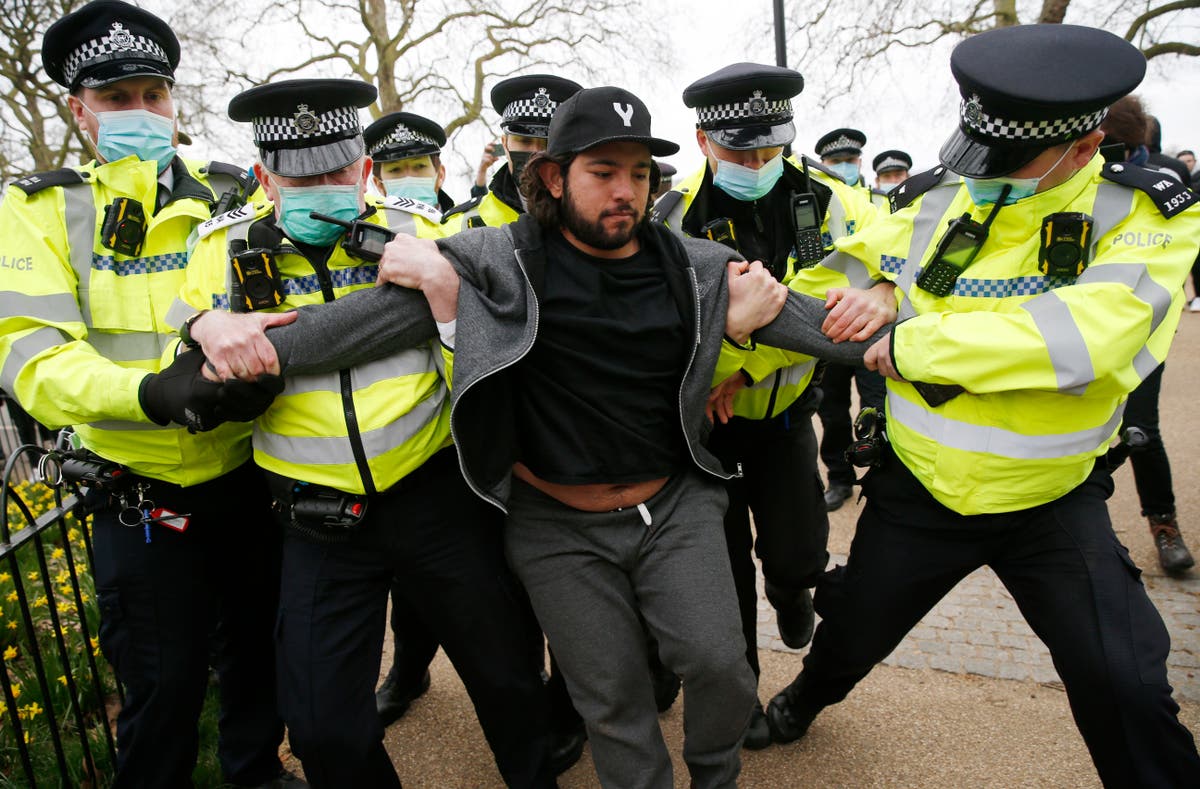 Anti-lockdown protests: 33 arrested as demonstrators clash with police in London

Dozens of people have been arrested as police attempted to halt thousands of anti-lockdown protesters marching through the centre of London.

Demonstrators trailed by police paraded banners and lit flares as they walked from Hyde Park along Oxford Street, Chancery Lane, the Embankment and Parliament Square before heading up Whitehall.

Scotland Yard said 33 people had been arrested by 6.45pm, most for breach of Covid regulations.

“Our officers are continuing to engage with people attending the ongoing protests in central London,” the Metropolitan Police tweeted.

“Those gathering in crowds are being encouraged to disperse and go home.

“Officers will take enforcement action where necessary. This could be a fixed penalty notice, or arrest.”

Deputy Assistant Commissioner Laurence Taylor said it was “incredibly challenging” to police such events “particularly in the current circumstances”.

“Of course everyone has a right to protest, protest is not unlawful,” he told the BBC.

“But gatherings of this size are unsafe. It’s incredibly challenging to police events like this particularly in the current circumstances.

“We absolutely recognise the strength of communities, so what we need to do is try and look at what is the best way to keep people safe, the best way to proportionately enforce the law and to that in a way that requires as little intrusion as we can.”

Similar demonstrations took place in Manchester as hundreds of people gathered outside the National Football Museum before marching to Greater Manchester Police’s headquarters claiming lockdown was a “crime”.

There were no reports of any arrests in Manchester, where separate marches by Black Lives Matter protesters and demonstrators against violence towards women also took place.

The protests came as a group of cross-party MPs and peers wrote to Priti Patel to ask her to lift a ban on protests during the Covid-19 lockdown in the wake of confrontations with police at a vigil in south London following the killing of Sarah Everard.

More than 60 MPs and peers signed the letter to the home secretary and warned that allowing the police to criminalise people for protesting is “not acceptable and is arguably not lawful”.

Protesting is not listed as a “reasonable excuse” for leaving home under the government’s coronavirus regulations.

Saturday’s clashes come a week after the Met faced criticism for its handling of a vigil on Clapham Common in memory of Sarah Everard.

The MPs’ letter said such “shocking scenes” were “entirely avoidable” if the Government had provided guidance to police and ensured protests were clearly exempt from the ban on gatherings under lockdown.

It was addressed to home secretary Priti Patel and health secretary Matt Hancock, and was co-ordinated by Liberty and Big Brother Watch,