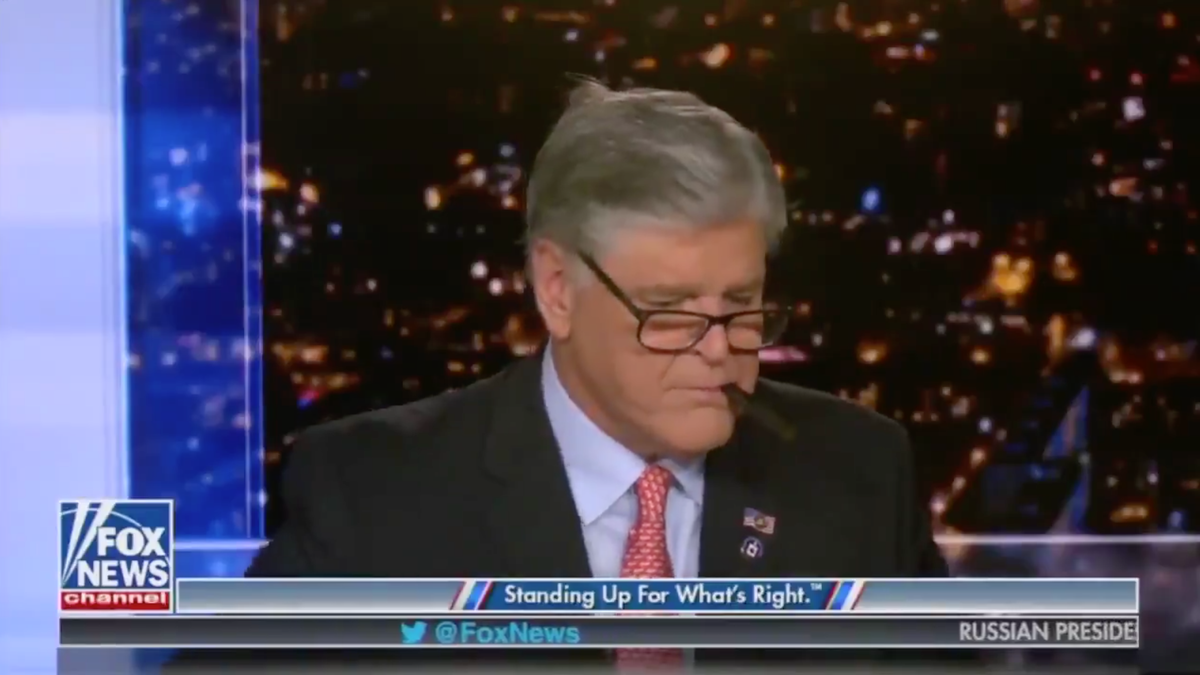 Sean Hannity caught vaping as show comes back from commercials

As his show came back from a commercial break, Mr Hannity appeared to be absorbed in something he was reading, with his glasses on and an electronic cigarette in his mouth. A voice could be heard whispering, “Sean! Sean!”

The host then snapped nervously into focus, yanking the vape pen out of his mouth but leaving the glasses on.

“Uh-oh,” Mr Hannity said sheepishly, before transitioning to the next segment. “Now our villain of the day!”

“They caught Hannity ripping the juul,” one user tweeted, adding a cry-laughing face.

“I definitely did not have ‘Sean Hannity blowing Juul clouds on air’ on my 2021 BINGO card,” another commented.

“Sean Hannity sucking on his juul like it’s a 1870’s pipe lololol,” someone else chortled.

Laura Ingraham, who hosts the show after Mr Hannity’s, teased the host about the vape during their handoff.

“Oh wait, am I on camera right now?” Ms Ingraham asked as she sipped from a glass of water, feigning surprise.

Mr Hannity had spent the show discussing a proposed debate between Vladimir Putin and President Joe Biden, who the right-wing pundit implied was not up to the task. Mr Hannity has been saying for months that the US president is “struggling cognitively.”

This is not the first time Mr Hannity has been caught smoking on his show. In 2017, a clip circulated online of the right-wing pundit smoking an e-cigarette as he waited for a video segment to finish.

Mr Hannity recalled that episode as he laughed off this latest vaping incident.

“Enjoy it, everybody, at my expense,” he told Ms Ingraham. “I have a good sense of humor.”

Fox News has not yet replied to The Independent’s request for comment.

0 0 0 0
Previous : INTRODUCING “THE GREAT CELEBRATION” 🇬🇧🎉🍾🎶 A 30 DAY FESTIVAL SHOWCASING THE BEST OF LONDON ♥️🌎
Next : Britain as a top three ‘soft power’ is something we should fight to retain