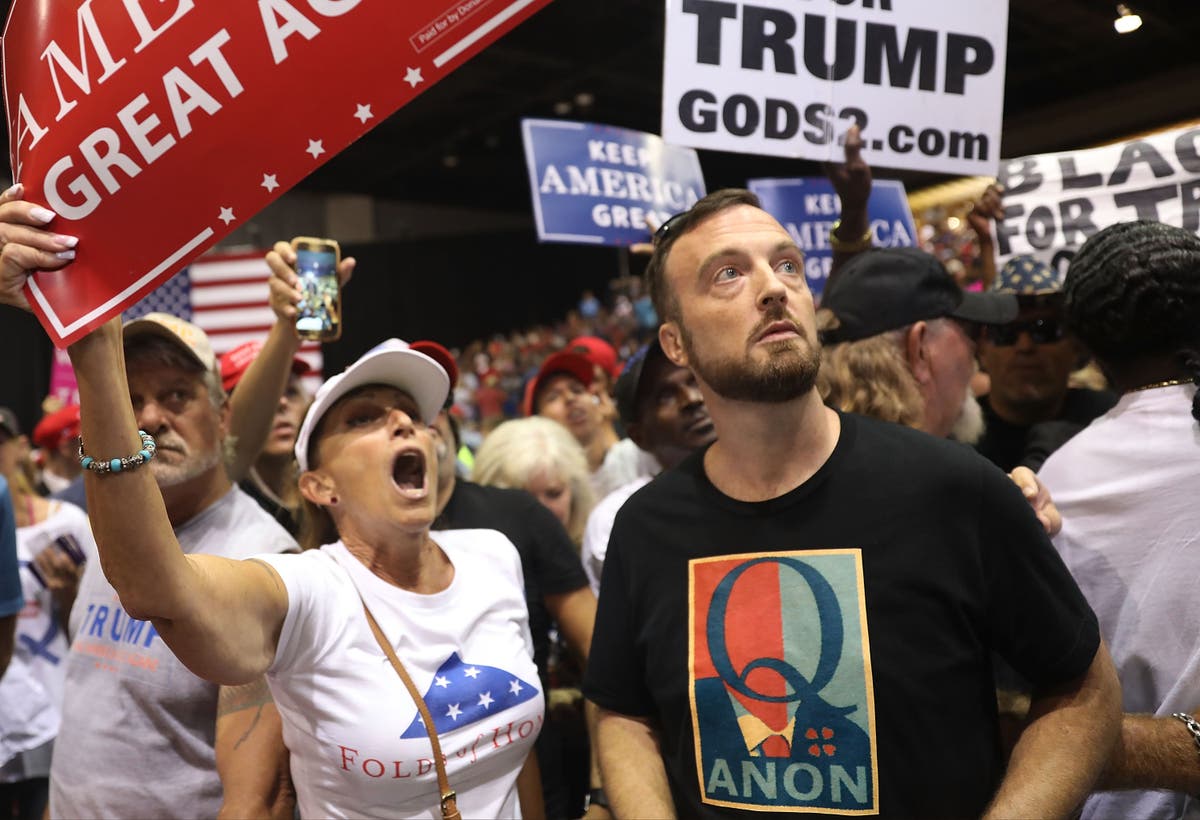 QAnon: A quarter of Republicans in favour of conspiracy theory cult, poll finds

A survey of American attitudes towards the prosecution of those Donald Trump supporters who took part in the US Capitol riot on 6 January has found that almost a quarter of Republicans think favourably of the QAnon conspiracy cult.

While 70 per cent of GOP voters polled by Pew Research took exception to the movement, which posits that a secret cabal of left-wing paedophile Satanists run world governments from the shadows, some 24 per cent said they held a favourable impression of it.

And six per cent of Democrats said they also held a positive opinion of the group whose acolytes took part in the failed insurrection, intended to overturn Joe Biden’s election win.

The poll also found that QAnon, which has taken root on social media after originating on 4chan in October 2017 and thriving during the coronavirus pandemic, was still not widely understood.

Only 23 per cent of Republicans said they had “a lot” or “some” knowledge of what the conspiracy theory actually entails or what its adherents believe. Thirty-one percent of respondents said they did not know much about it and 39 per cent admitted they knew nothing at all.

Among Democratic voters, 40 per cent claimed to have “a lot” or “some” experience of the regular information drops made online by “Q”, supposedly a deep-cover agent working at the heart of Washington, DC, to expose the alleged clan of cannibalistic child traffickers.

The movement arrived on the national stage when President Trump was asked about it by NBC journalist Savannah Guthrie during a pre-election town hall event last October.

Apparently hungry for votes, he refused to overtly denounce its members, answering: “I don’t know anything about QAnon… Let me just tell you what I do hear about it is they are very strongly against paedophilia and I agree with that. I do agree with that.”

QAnon has received several setbacks to its grand narrative since the Capitol riot, the long-foretold “storm” of that day amounting to nothing. Congress reconvened swiftly after the disruption to attempt to prevent the election results from being ratified by vice president Mike Pence, and Mr Biden was duly inaugurated as president two weeks later.

Overall, the Pew Research study found that 69 per cent of Americans believe it is “very important” that federal law enforcement agencies find and prosecute the rioters while 12 per cent say they do not care.

The research also pointed to a growing awareness of the threat posed by domestic terrorism, with right-wing extremism cited as a “major problem” for 52 per cent and left-wing extremism a cause of concern to 51 per cent.

That compares to just 37 per cent expressing concern about Islamist terror 20 years on from 9/11 and George W Bush’s War on Terror and only 34 per cent who are worried about the potential for terrorism from fundamentalist Christians.

0 0 0 0
Previous : Congress asks for recall of flea collar that may be linked to nearly 1,700 pet deaths
Next : Oxford awarded major funding to probe childhood poverty and social inequalities