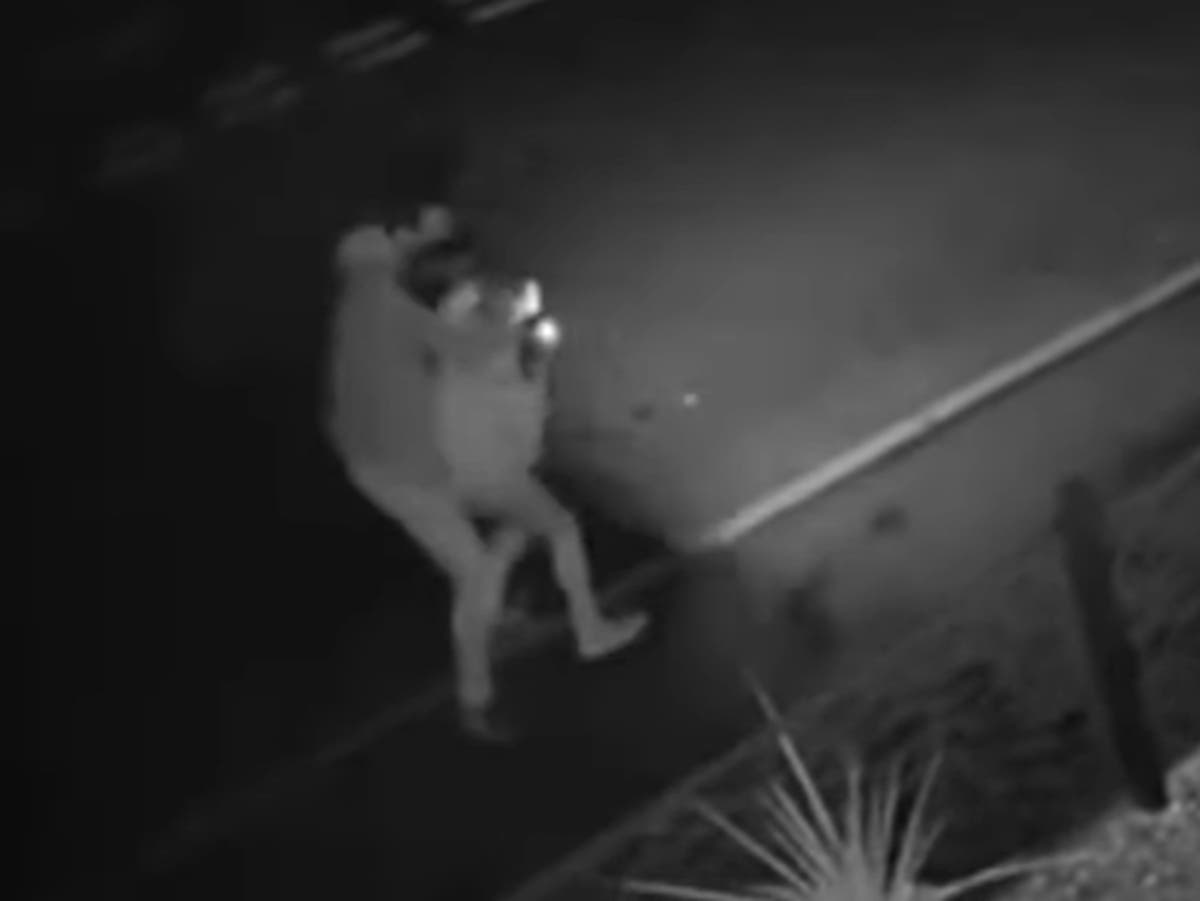 A male off-duty police officer convicted of drunkenly assaulting a woman has been spared prison, sparking criticism from a leading MP that the “system fails women and protects men”.

He admitted a charge of assault by beating in January and on Friday was handed a curfew and told to pay £500 in compensation. He has been suspended from his job pending gross misconduct proceedings but was initially allowed to continue working.

His sentencing comes with the conduct of police is under intense scrutiny following the death of Sarah Everard, who is alleged to have been murdered by a Metropolitan Police officer.

Ms Homer, 37, was walking home alone in a village in Warwickshire after an evening out with friends “drunken” Banfield attacked yards from her door.

Banfield, 25, an off-duty probationary officer, used techniques taught during his police training to try to tackle her to the ground.

CCTV footage of the attack, obtained by Channel 4 News, showed how he put her in a headlock and dragged her across the pavement, yelling: “On the floor now, on the floor now”.

A woman, reported to be his partner, is heard in the clip trying to stop the attack.

Ms Homer said: “He started shouting, ‘Why are you following me?’ He repeatedly tried to get me on the floor. It was like he was pretending to be in a cop film, calling for back-up, how an officer would arrest somebody, like he was in a film.

“He got me on the floor, round the neck, screaming and shouting aggressively.”

Banfield, 25, was given a 14-week curfew banning him from leaving his house between 7pm and 7am, and must pay £500 compensation together with a £95 victim surcharge and £85 court costs.

Reacting to the sentence, Labour MP Harriet Harman said on Twitter: “Policeman attacks woman walking home alone after dark. Must have been terrifying for her but no prison sentence.

“This is proof, if any needed, that system fails women and protects men.”

She urged West Midlands Police to review the case.

The force said Banfield was “removed from public-facing duties after the assault” while a criminal investigation into the attack in Bidford-on-Avon was carried out by Warwickshire Police.

His employer force said that following the end of the criminal investigation, Banfield was immediately suspended pending the outcome of a disciplinary process into an allegation of gross misconduct against the officer.

West Midlands police and crime commissioner David Jamieson said it was “right that Oliver Banfield is now facing a gross misconduct investigation and has been suspended”.

He has asked the force’s chief constable, Sir David Thompson, to brief him “on the steps taken by West Midlands Police”.

Homer, hit out at Warwickshire Police’s initial handling of her complaint after she was attacked by a “drunk” Banfield while walking home at about 1am on July 26 2020.

In a victim impact statement issued through a relative, Ms Homer said the effects of the assault had left her with “anxiety, insomnia and stress” which had been “compounded by the slow response from Warwickshire Police”.

The force has since personally apologised to Ms Homer stating its “initial response to the report of the assault was not as swift as it should have been”.

Mrs Homer added that when the Warwickshire force presented a case file to the Crown Prosecution Service (CPS) in September 2020, it was decided not to charge Banfield.

However, aided by the Centre for Women’s Justice, Ms Homer had the CPS’s decision reviewed and prosecutors charged him in December 2020.

He admitted assault by beating in court at Leamington Spa in January this year.

Describing the assault, Ms Homer said: “I often ask myself if the impact of the attack would have been so severe if my assailant was not a police officer.

“During the assault as I struggled to get to safety, I was sure this drunk man was fulfilling a violent cop movie fantasy.

“To be verbally abused with misogynistic slang, grabbed by the neck, and forced to the floor on a dark road by a drunk man a foot taller than me is terrifying, but to then find that he was a police officer shook my belief system to its core.”

She said: “I considered myself a confident, relaxed, and independent wife and mother but since the attack I live with constant anxiety.

“I have changed simple things like my route home, and I have had to ask my family not to discuss the case as it sends me into a panic attack – indeed whenever the subject is brought up I feel a rush of anxiety and a tightening at my throat.”

Chief Superintendent Ben Smith, of Warwickshire Police, said the force recognised “the strength of feeling that has come about as a result of Sarah Everard’s tragic death and understand the concerns relating to violence against women and girls nationally”.

He added the police was “aware of the concerns” around its handling of the case, had carried out a review and “responded to the complainant”.

He said: “We acknowledge that, due to internal process errors, the initial response to the report of the assault was not as swift as it should have been, and an apology has been issued with regards to this.

“A proportionate investigation was then conducted, which ultimately led to the charge and prosecution of the perpetrator.”

“I authorised a charge of assault by beating against Oliver Banfield after a referral under the victim’s right to review process, and I have personally engaged with the victim and her family throughout the proceedings.”

Deputy Chief Constable Vanessa Jardine, of West Midlands Police, said: “Oliver Banfield was removed from public-facing police duties after the assault and while the investigation by Warwickshire Police was being carried out.

“To protect the criminal case we’ve not been able to carry out our own misconduct investigation until its conclusion.

“Now sentencing has taken place, our investigation will be carried out and Pc Banfield faces allegations of gross misconduct and is currently suspended.”

She added: “We understand the strength of feeling surrounding the desperately sad death of Sarah Everard and concerns on the issue of women’s safety but it would not be appropriate for us to comment further at this stage.

“Our role is to protect the public, who should be able to trust us. We therefore hold all our officers to the highest standards and we will take appropriate action against anyone whose actions fall below what is expected.”

The Centre for Women’s Justice says it has issued a “super-complaint” against police on behalf of 46 women who felt “severely let down” by forcesafter reporting domestic abuse committed by officers and staff.