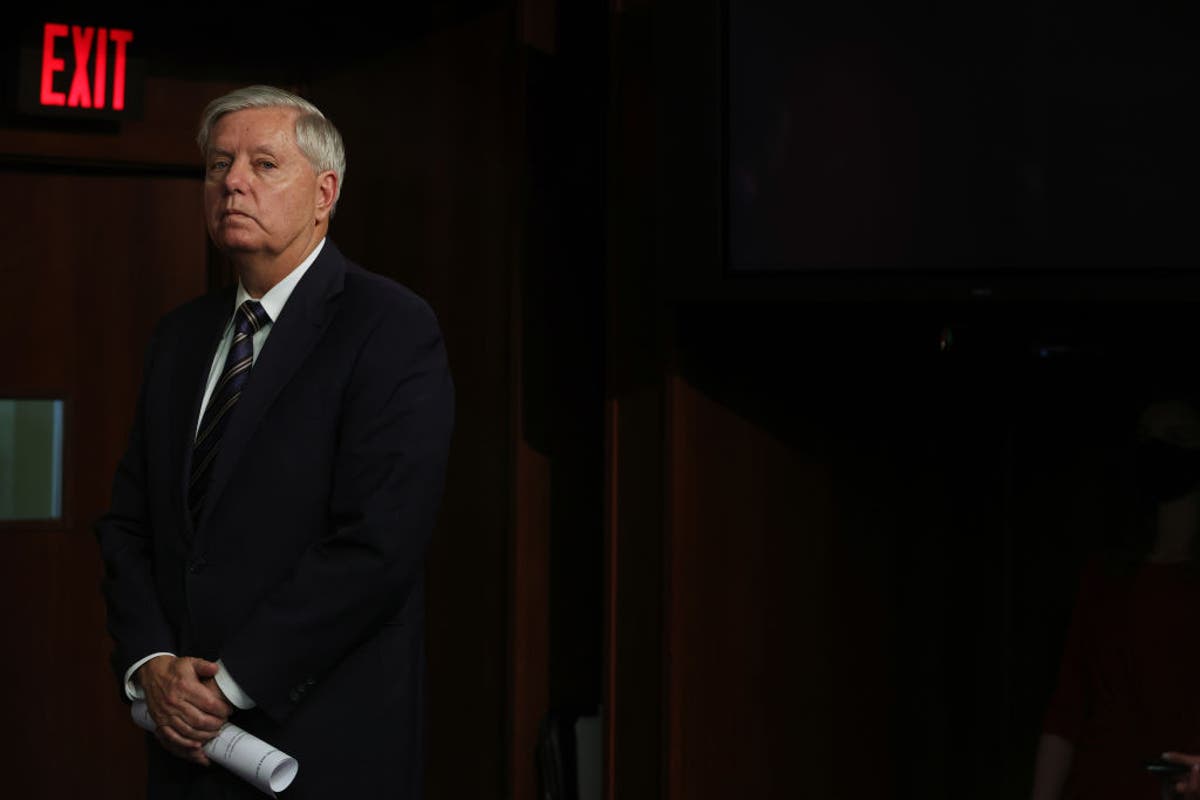 Even if Democrats make changes to Senate filibuster rules to make it more difficult for Republicans to block legislation, the GOP would stop at nothing to prevent the passage of bills they believe would ruin the US, Senator Lindsey Graham has said.

“I would talk until I fell over to make sure we don’t go to ballot harvesting and voting by mail without ID,” the South Carolina Republican said in an interview with Fox News this week, referring to Democratic legislation to expand voting access.

“I would talk until I fell over to make sure that the Equality Act doesn’t become law, destroying the difference between a man and woman in our law,” Mr Graham said about the proposal that would ban discrimination based on sex, sexual orientation and gender identity.

Mr Graham was responding to Joe Biden’s suggestion that the Senate ought to bring back the “talking filibuster” to force the minority party to talk without stopping on the Senate floor in order to shut down consideration of a bill. No bathroom breaks, nothing.

Current Senate rules put the onus on the majority to accrue 60 votes to end debate on legislation, setting up a final vote on the actual bill. In effect, that means legislation requires a three-fifths majority to pass the Senate, as opposed to the simple 50 per cent majority mandated in the US Constitution.

Mr Biden, who spent decades in the Senate before transitioning to the White House to be vice president and now president, has said it should not be as easy as it has become for the minority party to block a president’s legislative agenda.

“You’ve got to work for the filibuster,” the president said in a recent interview with ABC. “It is almost getting to the point where democracy is having a hard time functioning.”

“The filibuster has deep roots in racism, and it should not be permitted to serve that function, or to create a veto for the minority,” Senator Elizabeth Warren said on Thursday. “In a democracy, it’s majority rules.”

South Carolina Senator Strom Thurmond, whose seat Mr Graham now fills, once filibustered for 24 hours and 18 minutes, the longest speech in Senate history, to kill the Civil Rights Act of 1957.

For years, Senate Democrats have flirted with purging the filibuster from its convoluted set of rules. In 2013, then-Democratic Senate Majority Leader Harry Reid of Nevada convinced his party to do away with the 60-vote threshold for judicial nominees since opposition from the Republican minority was causing a logjam. The rule change allowed Democrats to confirm dozens of President Barack Obama’s judicial appointments before Republicans retook the majority in 2015.

He has vociferously opposed Democratic calls to end the 60-vote threshold for legislation.

In Tuesday’s speech on the Senate floor, he reiterated that position, threatening to hinder Senate Majority Leader Chuck Schumer’s moves at every turn.

“Nobody serving in this chamber can even begin to imagine what a completely scorched-earth Senate would look like,” Mr McConnell said. “It would not open up an express line for the Biden presidency to speed into the history books … The Senate would be more like 100-car pileup – nothing moving.”

Democrats have been under considerable pressure to do away with the filibuster to actualise Mr Biden’s agenda on everything from climate change to an historic voting rights package to passing sweeping immigration reform.

But Mr McConnell vowed on Tuesday that if Democrats did away with the Senate’s 60-vote threshold, he would have no conscience cutting Democrats out of the lawmaking process to ram through conservative legislation the next time the GOP controls both chambers of Congress and the presidency.

Imagine a world, Mr McConnell warned Democrats, where a GOP-controlled Senate blocked funding for Planned Parenthood, passed a state reciprocity legislation for gun owners, and made laws cracking down on immigration across the US-Mexico border – all without Democratic input.

“As soon as Republicans wound up back in the saddle, we wouldn’t just erase every liberal change that hurt the country,” he said. “We’d strengthen America with all kinds of conservative policies with zero input from the other side.”

All of this sabre-rattling could be for nothing: to change Senate rules, all 50 Democrats and Democratic-caucusing Independents would need to band together.

Senators Joe Manchin of West Virginia and Kyrsten Sinema of Arizona have both stated their vehement opposition to eliminating the filibuster, saying it is vital to the functioning of the Senate for the minority to have a say in legislation.

Mr Manchin has been peppered with questions from reporters multiple times per week without budging.

0 0 0 0
Previous : ‘Who gave them the right to declare my income unIslamic?’: The transgender activists’ ordeal in Pakistan
Next : Mike Graham | 19-Mar-21