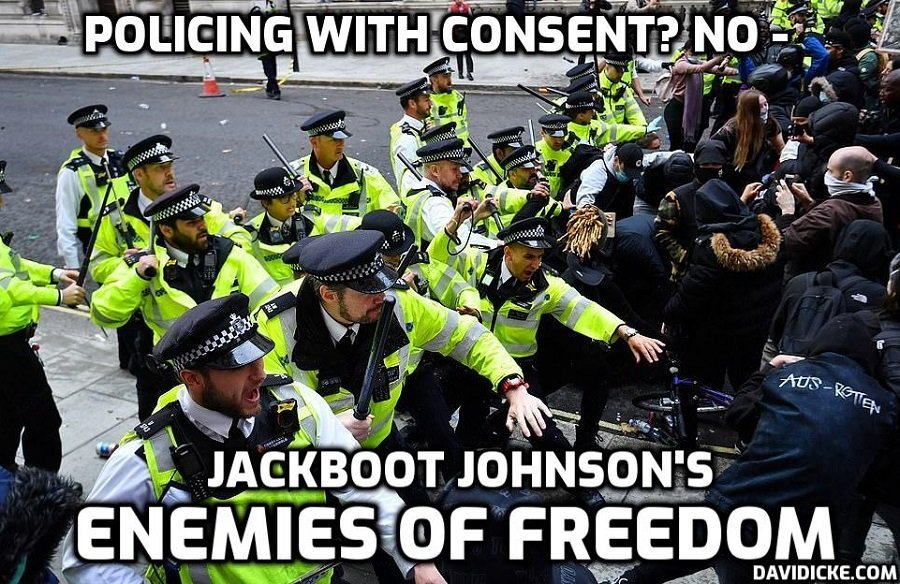 Britain will take a step closer to police state tyranny this week when parliament passes a bill that will effectively end the cherished, longstanding tradition of ‘the right to protest.’

The Police, Crime, Sentencing and Courts Bill 2021 has been described by one MP as ‘a major step on the road to authoritarianism and suppression of dissent’ and by a leading criminal barrister as ‘absolutely crazy’ and ‘really scary.’

I wake up this morning full of foreboding for our country.
Today’s Policing Bill isn’t about the traditional idea of law based on consent.
It’s about a major step on the road to authoritarianism and suppression of dissent.

Soon you will not be allowed to protest about the removal of your right to protest.

The new legislation is the brainchild of Home Secretary Priti Patel and is being sold to the Conservative base as a way of avoiding repeats of the various Black Lives Matter and Extinction Rebellion demos which caused damage to property, massive disruption and a huge bill to the taxpayer for extra policing costs.

There is lots of red meat in it for traditional Conservatives: an eye-catching initiative in which people who damage memorials — like the woke mob which chucked a statue of slave owner Edward Colston into the river in Bristol — could face up to ten years in prison; tougher rules in dealing with travellers who make the lives of rural villagers misery; and so on. This will undoubtedly appeal to the socially conservative Red Wall voters in the Midlands and North, whom Boris Johnson’s government is desperate to keep onboard.

Perhaps this is why so few Conservative MPs are opposing this illiberal measure. Their determination to push the bill through — only the House of Lords can stop it now — is likely to have been strengthened by the thought that most of those most fiercely opposing it are Labour MPs. And if Labour are against, they may well delude themselves, then it must be a jolly good thing.

What few Conservative MPs appear to have realised is that this unprecedented increase in the powers of both the Home Secretary and the police to clamp down on protests of any kind may eventually be used to bite their own supporters, or to suppress freedom generally.

At the moment, sure, attention is being focused on last weekend’s vigil for murder victim Sarah Everard. Heavy-handed policing gave hard left infiltrators just the excuse it needed for a noisy demo in Parliament Square — of the kind that may soon be banned under the new legislation — in which the mob (including Black Lives Matter) chanted angry slogans like ‘kill the bill’.

0 0 0 0
Previous : Desperate to get intelligent people to have the fake ‘vaccine’ by lying to them – this is what is being sent to peoples’ homes
Next : Dutch prime minister powers to fourth straight election win Party for Freedom Dutch Forum for Democracy European Union Geert Wilders