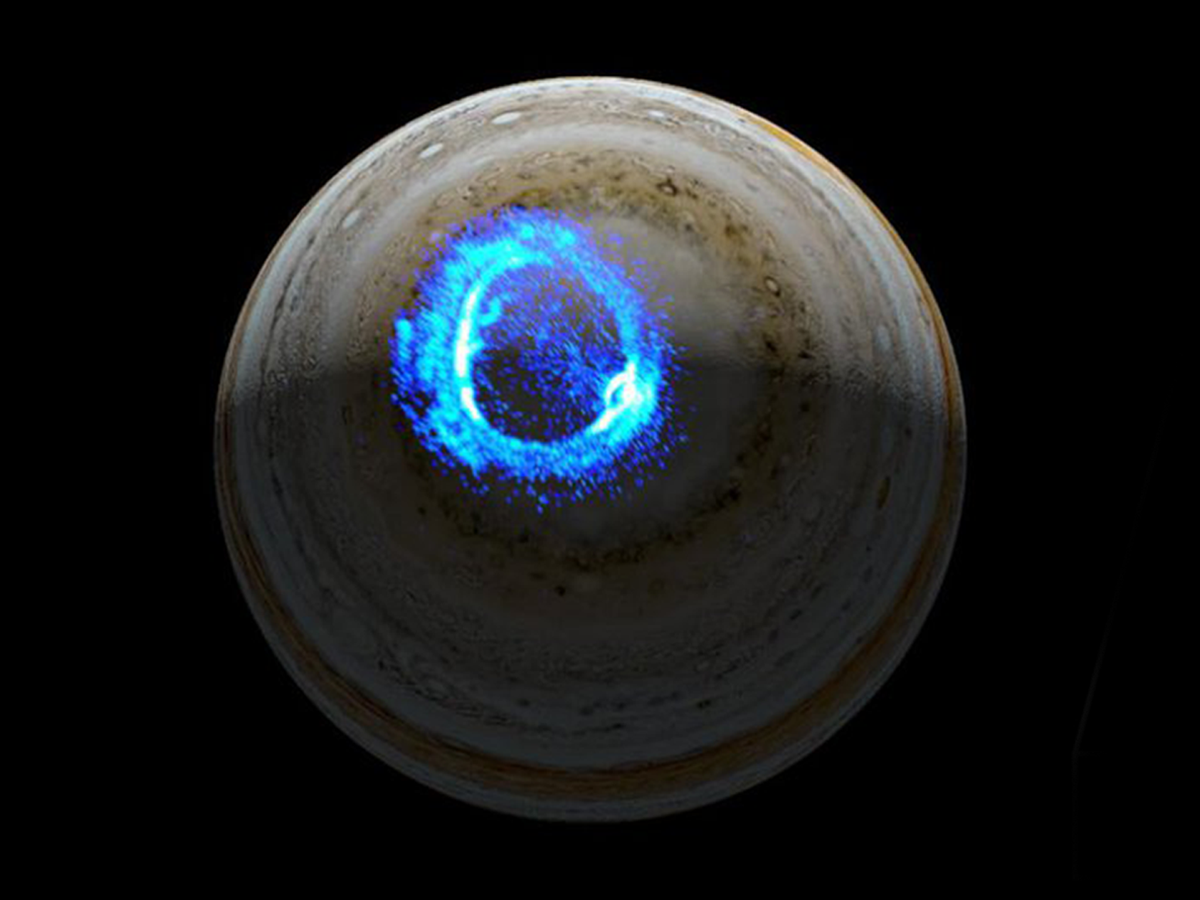 Originally discovered in 1994, the beautiful blue ring above the gas giant’s north and south poles are formed on the nightside of the planet. As it rotates, and dawn breaks on the planet, the auroral features become more luminous.

It is estimated that between hundreds and thousands of gigawatts of ultraviolet light are beamed into space from the planet, 10 times greater than that of a the typical aurora.

Despite the huge amounts of energy that were given out, the aurora has been hidden from scientists’ view. This is because, prior to Nasa’s Juno mission that was launched in 2016, the view had only been visible from the side – hiding everything that happened on the nightside of the planet.

“Observing Jupiter’s aurora from Earth does not allow you to see beyond the limb, into the nightside of Jupiter’s poles. Explorations by other spacecraft – Voyager, Galileo, Cassini – happened from relatively large distances and did not fly over the poles, so they could not see the complete picture,” Bertrand Bonfond, a researcher from the University of Liège in Belgium, explained.

“That’s why the Juno data is a real game changer, allowing us a better understanding of what is happening on the nightside, where the dawn storms are born.”

The storms on Jupiter are very similar to a kind of aurora found on Earth, known as substorms. These are caused by short disturbances in the Earth’s magnetosphere, which is controlled by our planet’s magnetic field, where energy is released high into the planet’s ionosphere.

Yet this similarity is peculiar, because the magnetospheres of Jupiter and Earth contrast vastly. On Earth, the magnetosphere is subject to the whims of the solar winds – charged particles that bombard the Earth from the Sun; on Jupiter, by contrast, it is particles from its volcanic moon Io that get ionised and trapped around the gas giant via magnetism that make up its magnetosphere.

“The power that Jupiter possesses is amazing. The energy in these dawn aurorae is yet another example of how powerful this giant planet really is,” said Scott Bolton, principal investigator of Juno from the Southwest Research Institute in San Antonio.

“The dawn storm revelations are another surprise from the Juno mission, which is constantly rewriting the book on how giant planet’s work. With Nasa’s recent mission extension, we’re looking forward to many more new insights and discoveries.”