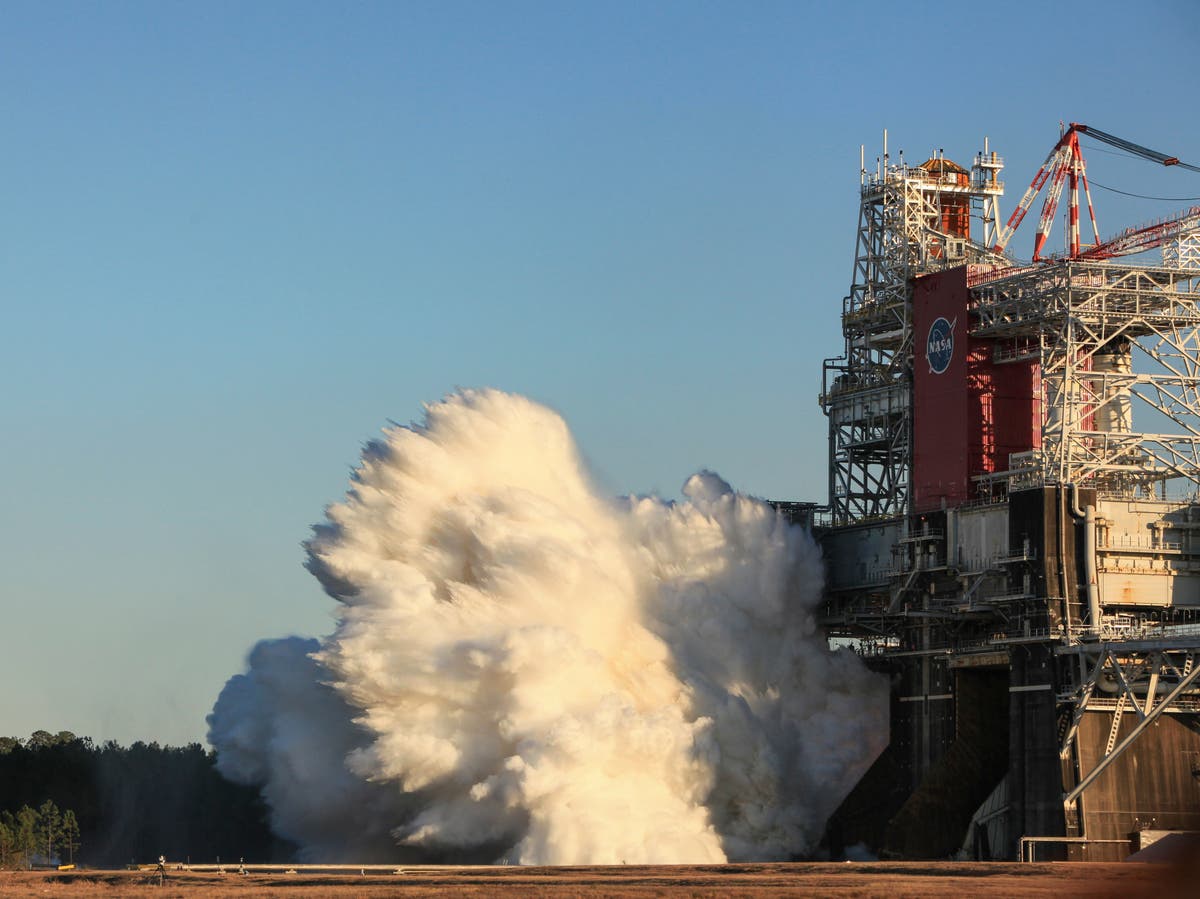 NASA is closing in on the final test of its massive rocket that it is hoped will put the first woman and next man on the Moon.

The agency will ignite the engines of its $18.6bn Space Launch System later today for an eight-minute burn to see if it is ready for use this autumn. This will be the second test of the engines and the final run-through before NASA moves to the second stage on the launchpad.

The mission planned for November will be unmanned, but the hope is that this launch system will be used for a future manned mission to the Moon. However, budget constraints have blurred the timeline for such a trip.

According to NASA, the Space Launch System is a “super-heavy-lift launch vehicle” that it says “is the only rocket that can send Orion, astronauts, and cargo to the Moon on a single mission”.

Orion is a kind of partially reusable space capsule that is intended to “take humans farther than they’ve ever gone before”.

The burn of the rocket’s core stage using four RS-25 engines for eight minutes will generate 1.6 million lbs of thrust and take place at the Stennis Space Center in southern Mississippi, close to the Gulf of Mexico.

Over 700,000 gallons of liquid oxygen and hydrogen will fill up the tanks of the 212-foot core so that it can fire up its engines without actually shooting off into space.

The goal is to test the procedure for its launch ahead of its mission to send a capsule without a crew around the Moon and back to planet earth.

NASA’s acting administrator Steve Jurczyk said the Space Launch System “is going to be the most powerful rocket ever developed,” NPR reported.

The test is to begin sometime after 3pm Eastern Time on Thursday. Earlier this year, a test had to be ended after 67 seconds because of an engine failure.

“We can understand exactly what happened in the first test and what cut it short,” Mr Jurczyk said. One test parameter was too narrow and has been adjusted.

He added: “Start-up on the first test went really well, and so we’re reasonably confident we’re going to have a good test this week.”

While the test is supposed to last for eight minutes, the minimum of what NASA wants to see is a burn lasting at least four minutes, according to NPR.

Mission managers say they hope to collect all the data they need from the test in the first four minutes but will let the engines run for the full eight minutes to simulate the entire initial launch process. As the tanks empty, the rocket will weigh only a fraction of the 2.3 million pounds it weighs at the start.

Boeing Space Launch System manager John Shannon said: “Our primary goal is to not only get the hot fire data, but also to protect the stage [for use as] the first flight article. So we’re kind of threading a needle here between keeping the vehicle safe and gathering this data,” WSGW reported.

The rest of the materials for the launch are already at the launch site at the Kennedy Space Center in Florida, where the rocket will be moved if the test is successful.

The Trump Administrations had set the goal of astronauts being back on the moon by 2024, but NASA says budget constraints make that unlikely. Mr Jurczyk said the funding they got only was “a fraction of what we requested”.

He said: “Given that budget challenge we have, we’re taking a look at what is a reasonable timeline for that first crewed mission to the surface of the moon.”

Mr Jurczyk said that the Biden Administration has been supportive of the strategy set out by NASA to use a mission to the moon as a stepping stone for an eventual human mission to Mars.

The agency put its space shuttles to rest in 2011 and has been working on a huge new rocket for a trip to the moon ever since. Those critical of the project say its too expensive considering the relatively few times it’s going to be used and argue that commercial spacecraft can make the trip more affordable. According to the NASA inspector general, the cost of the project from 2012 to 2025 would be $86 billion.